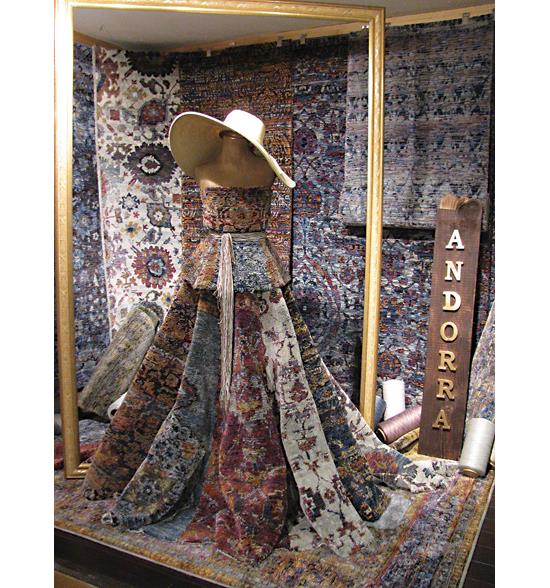 The Atlanta International Area Rug Market convened on January 13 through 16 at AmericasMart Atlanta. Showrooms were busy, elevators were packed, and exhibitors reported brisk sales. The energy of the crowd was mirrored in the vibrancy of the rugs on display at the Market. Bright colors combined with intricate textures and more strategic use of sheen made for many striking looks this year.

Blues and greys once again dominated the color palette. Grey has become a standard neutral, and even manufacturers that tend to be conservative with color are now incorporating blues. Aqua, grey blue, teal, cobalt, navy—just about every hue could be found in the rugs. And new this year, greens are making a return, especially blue greens, perhaps as a natural extension of the already popular aquas and teals.

Sheen was everywhere at last year’s show, but like texture its use is more purposeful now. Silk or viscose fibers are more often used to highlight certain design elements or to add opalescence to lighter colors. The use of matte and shiny fibers in a single rug also offer another layer of texture.

Distressed, faded and erased looks, already popular, were found this year in almost every showroom. Following the deconstructed trend in furniture and clothing, rug patterns trail off in corners or edges. In erased looks, the pattern may disappear randomly or in large segments right in the middle of a rug.

MARKET HIGHLIGHTS
Oriental Weavers (OW) greeted visitors with a kaleidoscope of color from its Andorra line. A vignette with a mannequin in a dress made of product from the new line marked the entrance of the showroom. The rugs are machine made in the U.S. using a blend of nylon and polypropylene fibers, and color is the collection’s main feature. OW experimented with its machinery to allow inclusion of up to 210 colors per rug, utilizing twisted, space-dyed and barber pole yarn systems along with both matte and lustrous fibers.

OW is calling the look “boho-luxe, where vintage soul meets modern traditional.” The extensive line includes 20 different designs, and although many of the patterns are traditional, the variegated combinations of saturated blues, reds and golds result in rugs that are anything but traditional. The rugs retail at $449 for a 5’x8’, and visitors responded positively to the many options for mixture with furniture and fabrics that the colorful rugs provide.

On the other end of the spectrum, Foundry is a new collection in response to the popularity of the industrial chic look. The rugs are machine woven in Egypt using space-dyed wool with a cut pile and a low profile. Eight simple traditional patterns use only two or three colors in soft neutrals, greys and blues to coordinate with the minimalistic feel of industrial furnishings.

Opaline was Nourison’s showstopper this year. Delicate organics and scrollwork are raised above a solid background, providing texture reminiscent of flocked wallpaper. In the corners, the design details disappear for an aged or faded look. The hand tufted wool is woven with carefully placed Luxcelle, a proprietary viscose, to accent individual details with sheen. The black rug with raised light grey detail work is dramatic, as are the black with silvery blue and crimson with ivory. The lighter beige, blue and grey color options provide less contrast for soft, rich looks.

Twilight, last year’s big seller for Nourison, received two new artistic additions. Storm and Moon look like hand painted scenes in creams, greys and black, one of dark billowing clouds and one of a huge full moon behind dark barren branches. Several other styles have been added since last year, almost all in greys and ivory, and many of them with abstract painterly effects.

A large room in the Nourison space was dedicated to its new One of a Kind program aimed at designers. Many patterns have been created that will be made only once in a particular color combination, so a designer can choose a rug for a client that will not be replicated. Designs vary widely from soft tonals to high color contrast and traditional patterns to contemporary abstracts. Many have varying amounts of the faded or distressed look, and some even look as though yarn is missing, revealing the warp and weft fibers. All are high-end wool rugs, some mixed with sari silk for vibrant color, and retail for $10,000 to $12,000 for an 8’x10’.

Mohawk’s high-end Karastan brand garnered attention in its showroom with two collections from its new wool program made on a Van de Wiele loom, which is faster and less expensive to run than the traditional Axminster loom. Karastan, experimenting with ways to make Van de Wiele products look more handmade, produced the Titanium and Manifesto collections, constructed of 100% worsted New Zealand wool. The rugs offer a high-end look, but retail for an affordable $799 for a 6’x9’ or $1,500 for a 9’x12’.

Manifesto includes ten styles in traditional Persian Sultanabad, Khotan and Agra patterns. To enhance the quality and authenticity of the collection, the fringe is not sewn on, but is a true extension of yarn from the rug. The soft color palette consists mainly of greys and neutrals accented with aquas, browns and brownish reds, and the grey and aqua combination in Masque Charcoal hanging on the booth wall was especially attractive. The ten designs in Titanium lean more toward transitional patterns, some with distressed or erased looks, all in worsted New Zealand wool with touches of viscose for sheen.

Karastan’s best selling rug, the 717 design, has been around since 1938 and has never been recolored—until now. As part of the Artisan Collection, the historic pattern was given a bold new color palette for a limited edition release of only 250 pieces, which will be numbered with a certificate of authenticity. The original colors are soft and mainly neutral against a light cream background, while the new colors include blue, green, orange, grey and tan contrasted against a preponderance of rich reds.

Spice Market, an existing collection made of EverStrand PET fiber, received three new designs in updated colors this year, including a striking rug in saturated blue with deep coral accents. And Anastasia, the top selling pattern in the Sovereign collection, also got a color update with Robin’s Egg, a soft aqua blue and rich cream combination, which was well received at the show.

Mohawk’s American Rug Craftsmen brand will unveil its introductions at the July market.

Every six months, Surya identifies five new trends for its rugs and coordinating home accessories, which for this Market included: Serenity and Rose Quartz (the 2016 Pantone colors), Decadence, Neutrals, Organix and African inspired Kuba. In addition to a wide selection of new rug designs, Surya has also recently expanded its lighting offerings in an ongoing effort to provide a more complete array of home accessories.

The existing Caesar line, which includes approximately 100 mainly traditional rug styles, received an update with Castello. The collection is constructed of 100% hand tufted wool and speaks to the latest trends with its mainly neutral color palette, updating the traditional line with larger patterns and smaller borders.

Surya’s machine made products have been evolving over the past two years, borrowing elements from the hand tufted and hand knotted lines to bring higher design to lower price points with a 5’x8’ retailing around $399. Eleven new styles were added to the Cosmopolitan line made of 100% polyester. Suzani is a fashion forward example, with a pattern taken from hand knotted rugs with carved design elements and a carved border, unusual for a polyester rug. Soft colorways add to the rich look with ocean blues, navy, mossy greens and taupe.

Kaleen, a manufacturer of rugs and broadloom, is headquartered in Mumbai, India with U.S. offices and distribution facilities in Dalton, Georgia. Eight new collections and five line extensions, totaling 246 new rugs, filled its permanent showroom in Atlanta. Kaleen offers more than 5,000 SKUs from synthetic machine made rugs starting at $129 retail for a 5’x8’ up to hand knotted wool rugs for $799.

The new Mercery collection offers a high-end Tibetan look with ikat, global and subtle erased patterns hand tufted in India of wool and viscose. Sea Isle is a light-hearted indoor-outdoor collection made of 100% polypropylene with UV protectant and Kaleen’s K-Stop non-skid backing, perfect for a home by the water. The new styles include brightly colored beach themed images such as bicycles, flamingos, sea horses and crabs.

Capel Rugs featured 16 new collections and five line extensions at the market, and Siam was highlighted on the showroom floor. The new hand knotted collection in soft greys and blues includes four patterns: Flower, Ikat, Temple and Tile. The 100% wool designs draw inspiration from previous collections that have been selling well, and the all-over repeated patterns lend a transitional look suited to a variety of spaces.

Expanding its line of traditional braided rugs, Capel introduced Simplicity, made up of six heathered braids in neutrals, a deep blue and a soft green. The polypropylene rugs are made in North Carolina, and a 5’x8’ retails for around $475.

On the contemporary side, Cosmic is a new flatwoven collection with four styles in polyester. Two of the looks blend abstract streaks of color, one in deep grey and purple and the other in a lighter grey, cream and tan. The other two styles feature patchwork blocks of random rug designs in blue and grey or silver and black.

Orian Rugs specializes in machine woven polypropylene rugs at price points under $299. This year the Mardi Gras line has been revamped for more aggressive pricing with ten new introductions. The traditional Mardi Gras green, purple and gold are mixed with blues, earthy reds and beige throughout the collection. A new design, Havana offers a contemporary harlequin pattern in gold and cream with random streaks of grey blue and green for an interesting painterly effect.

Jersey Home, an imported indoor-outdoor line, offers a new take on flatweaves with a slight high-low texture in natural colors that lends the rugs an organic reedy look. The collection of 15 patterns includes several cable knit and traditional trellis looks.