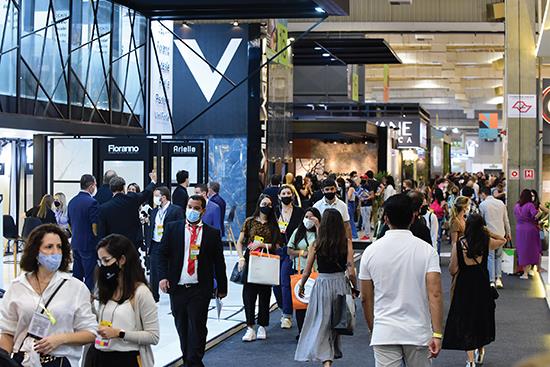 Expo Revestir celebrated the return to an in-person event along with its 20th anniversary this March. Last held just weeks after Brazil’s first case of Covid-19 was confirmed in 2020, Latin America’s largest ceramic trade show drew an international audience, mostly from Central and South America, though the U.S. was represented as well. The eclectic mix of products on the show floor spoke to some of the differences between the American and Brazilian tile industries. In Brazil, tile is often used throughout the entire house, offering the opportunity for a multitude of formats and aesthetics, and its prominence in both the culture and economy has led to experimentation and advancements in everything from tile sizes to finishes.

More than 52,700 visitors-including nearly 600 buyers from 39 countries, primarily from those stretching from America to Argentina-came to see launches from the 200 exhibitors present, said Benjamin Ferreira Neto, president of Brazilian tile association and Revestir host Anfacer. While those numbers are close to pre-pandemic attendance, visitation this year was limited, with an online edition for those who could not or did not feel comfortable enough to attend in person. The show floor sprawled across 131,235 square feet and will double in size next year with the show’s change of venue, which will also offer easier access to the city of São Paulo.

Brazil is the world’s third-largest ceramic producer, exporting a portion of the 3.438 billion square feet of tile it produced last year to more than 110 countries, the number one being the U.S., Ferreira Neto reported. “Our goal is to become increasingly relevant internationally,” he said, noting 38.5% growth in the country’s exports over 2020. However, Brazil also represents ceramic’s second-largest consumer market, and even with last year’s increase in exports, nearly 80% of the country’s production served the domestic market.

With production challenged by rising natural gas prices, Brazil has begun transitioning to a free-market supply chain for the resource, which is currently controlled by the government, a change for which Anfacer lobbied. Noting other hurdles for the industry, Ferreira Neto said, “2022 is also an election year with prospects for interest rate hikes, so we are acting cautiously, but also optimistically.”

Wood looks: The aesthetics on display at the Brazilian show were warm and authentic looking, like Alfagres’ Carvalho Natural.

Marble aesthetics: Natural stone looks were still the most widespread, with a focus on natural marble visuals, like Grecco by Villagres.

Realistic texture: With its cultural focus on ceramic, the Brazilian market embraces technical realism, like in I Naturali in Sahara Noir Extra Lucidato from Italy’s Laminam.

Luminescence: Incandescent aesthetics stood out, many featuring precious minerals like gold and bronze to give the surface a glimmering sheen, like Roca’s Fusion Titanium.

3D effects: Many producers had 3D wall tiles on display, achieved through both trompe l’oeil and physical dimension, like Itagres’ Livelli Linee.

Old is new: Historical references were seen in both patterning and materials. Seen here is Lepri’s Maxi Mattone in Grafiatto Cappuccino.

Geometrics: Though botanicals were still popular across the show floor, bold geometric designs were most often in the spotlight, like this assortment from Incepa’s Nature collection.

Human connections: Many of the featured tiles offered a sense of connection to other people through their designs, like Decortiles’ Diversa Mix Branco.

Mosaics: Incorporating both botanicals and geometrics, mosaics offer a way to personalize a space. Seen here is Eliane’s West in the Line and Arc patterns.