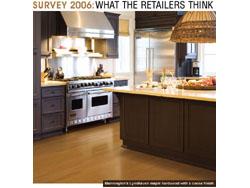 Growth in the residential flooring business may have slowed down from last year’s record pace, but a still healthy housing market and low (but climbing) interest rates have continued to help independent retailers grow this year. But, the independents say, it’s the big boxes and the buying groups that seem to be making the strongest gains, and many unaligned retailers blame the flooring manufacturers for not looking out for the little guys.

One retailer from the South put it this way: “The number one issue I have is the continuation of support by vendors to retail groups. It frustrates me to no end when vendors give special pricing to those groups which, instead of keeping the profit, ‘play’ that number in the market, driving margins down for every-body. It almost seems like the manufacturers would rather deal with the buying groups than with the independents.”

Many of the retailers we surveyed say it’s hard to keep up with the unrelenting costs of staying competitive. A dealer from the East said that “manufacturers and distributors don’t seem to have any idea how tough it is for the small retailer to survive. It’s impossible to keep up with the expense of updates and samples.”

One West Coast retailer zeroed in on a specific episodic cost: “It seems like every time a representative comes in the store, I’m told that the new styles, patterns and all samples have changed, requiring a new $600 display rack. I feel that if the manufacturers really think they need the new displays, they should pay for them. They’re basically passing the cost of promoting their goods on to the retailer, and that’s not fair.”

One of the most interesting comments came from an East Coast retailer, who claimed that “normally I’d never consider home centers as a business problem or a competitor. However, they do create the perception that they’re cheaper.” The retailer told about a carpet mill that sells its cleaning product to both independent retailers and big boxes, but the containers sold to big boxes are 25% smaller. “To the customer, they look the same as the ones sold to typical retailers. Except of course that they cost us 25% more than they do the home center! Same with other products that are made cheaper and sold cheaper at home centers. But do the customers know this?”

Of course, most customers don’t know this. In fact, many of the brand items sold at big box stores—not just flooring—are produced with cheaper materials or through cheaper manufacturing operations than those sold through independent retailers. The brand name lawn mower you buy at a home center may look identical to the one that costs 20% more at your local home and garden store, but there’s a good chance that it’s of lesser quality, manufactured in volume specifically for the big box.

The fact is, the only way to combat a system that favors the big players is with education, and that probably has to come through smart advertising. An informed customer is the independent retailer’s biggest asset.

The retailers who responded to the survey were divided into four regions: the Midwest, the South, the East and the West. Much like last year, those from the Midwest dominated, accounting for 36% of all respondents. The West accounted for 23%; the East 21%; and the South 20%.

We asked the retailers about their product mix, and answers were in line with previous years, though the numbers suggest broadloom and vinyl have lost a little share, while hardwood and laminate have gained.

Overall, the retailers reported that 46% of their revenues come from broadloom, compared to 49% last year, while hardwood accounts for 14%, up two points from 2005. Ceramic accounts for 12%, the same as last year, and vinyl is down a point to 10%. Laminate sales account for 12% of revenues, up from 10% last year, and area rugs make up 3%, up from 2% in 2005 but down from 6% in 2004. Last year we were skeptical about the area rug number, but this year’s modest increase seems to confirm that area rug sales did indeed dip, perhaps due to competition from big boxes, retail chains or the Internet.

The chart shows sales by product type for the entire country, but there were notable differences from region to region. While broadloom revenues came in at 46% nationally, sales of that product were strongest in the East, accounting for over 50%, and weakest in the South and West, where it came in at just over 40% each. It should come as no surprise that the reverse was true for hardwood, which was strongest in the South and West, at over 15%, and weakest in the East, at just over 10%.

Vinyl sales were strongest in the Midwest—over 11%—and weakest in the West and South, hovering around 8%. Vinyl sales in the East accounted for about 10%, the national average.

Area rug sales were generally stronger in the South and East, and a little below par in the West and Midwest. Once again, we find it troubling that rugs are such a small part of independent retailers’ product mix. They’re such an easy, high profit sale, especially when you’re selling hard surface floors.

Laminates were fairly consistent across the board, with a slight edge for the South and West, and a bit below average in the Midwest.

The picture was clearer with ceramics, where the South was strongest with about 14.5%, followed by the West with nearly 13%. The Midwest was about average, but ceramics accounted for only 9% of total sales in the East.

The fastest growing product category? Laminates, hardwood and ceramic/porcelain each accounted for a substantial 20% of responses. Then there was a big gap, with luxury vinyl tile, frieze broadloom and area rugs each making up 2% to 3%.

Finally, we took a look at the newest product types the retailers have added to their offerings. Cork led the way in every region except the South. Overall, 19% of respondents mentioned adding it, compared with 8% each for bamboo and fiberglass floors (loose lay vinyl). New laminate lines accounted for 6%, and ceramic, exotic hardwoods and hardened vinyls like Congoleum’s Duraceramic 4% each.

So what is it about installation in the Midwest? Either their customers aren’t the complaining type or that’s just where all the good installers are. Maybe they take more pride in their work in the Midwest, or maybe they pay installers better. If anybody out there thinks they have the answer, let us know.

Finding Good Workers seems to be a growing problem, up to 10% from 8% last year and 6% in 2004. Interestingly, while it only accounts for 4% of the problems in the South and East, and 8% in the West, 18% of Midwest respondents say it’s their top problem. Ironically, the Midwest seems to have the best installers, but the worst sales pool.

Sadly, one problem all retailers seem to have in common: Low Margins. Across all regions, 17% to 18% of respondents say it’s a top problem. Unfortunately, raw material and energy prices are largely behind that issue, which is why the responses are so uniform. It’s up to individual retailers to figure out how to take more cost out of the equation—better that than waiting for costs to ease. It could be a long wait.

Similarly, and in part due to the same influences, Intense Competition remains a big problem for everyone, though somewhat greater in the Midwest (16% compared to around 9% for the other regions). If one considers Home Centers and Intense Competition to be essentially the same issue, together the problem is almost as big as Installation.

It’s a testament to how tight margins are that Installation Training—which would be a direct step in tackling the top issue of Installation—doesn’t rank as the most essential key to improving business. When times are tough, people feel the most desperate about improving the bottom line, so, as the results show, Installation Training has taken a back seat to other areas that are perceived to be the quickest routes to healthier profits.

In the East and Midwest, only 15% of respondents cited Installation Training as the area where they most needed help. That number went up to 23% in the South and 26% in the West. And in the South and West, the fewest respondents said they needed help with Product/Sales Training, 15% and 19%, respectively, compared with 26% in the East and 23% in the Midwest. It was no surprise that Improving Margins, which is a much more all encompassing (but less clearly defined) goal, was high on everyone’s list.

In a hopeful sign, Advertising gained a little from last year, suggesting that maybe some retailers are beginning to realize what a powerful tool it can be for generating revenues.

For the complete survey results, see the July 2006 issue of Floor Focus Magazine.