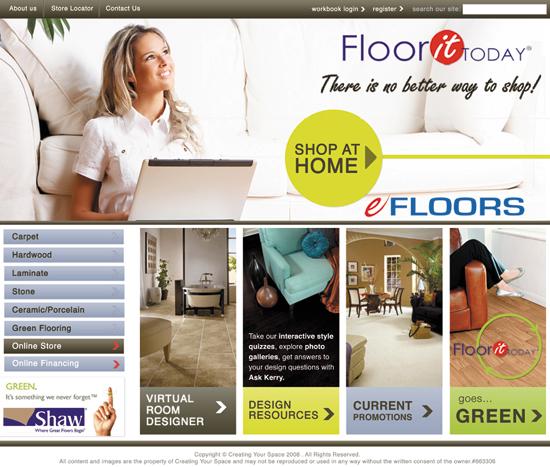 In a down economy, successful floorcovering retailers continue to advertise, even while they might be cutting expenses in other areas. It’s not easy to write a check for television spots or newspaper ads, knowing that consumers are reluctant to buy much of anything these days. Nevertheless, savvy retailers know that even if their advertising results in minimal sales right now, it is building awareness of the company, which pays off when the economy turns around. “We advertise on a consistent basis, no matter if business is bad,” says Guy Vellieux, owner of Floor Systems Inc., a one-store business and Shaw Design Center in Lisbon, Maine. “I hate to spend money now, but we have to position ourselves.”

But where should advertising money be spent? There’s no one-size-fits-all answer. It depends almost entirely on the local market, the cost of various media options per targeted listener or reader (which can vary greatly from market to market) and how that fits with a budget. In addition, there could be additional creative charges to produce the ads. For example, radio might work very well in a small market but be completely ineffective in a large market.

Cap Carpet, a successful and rapidly growing 14-store chain based in Wichita, Kansas, and a member of CCA Global Partners, uses television advertising heavily, and almost never uses print, except an occasional direct mail piece for a special event, or a newspaper insert. It also uses very limited radio, except as support.

“Television is pretty simple, the mechanics of it,” says co-CEO Aaron Pirner. “The Nielsen ratings determine viewership. It’s imperfect but it’s something to work with, you can target the audience and the pay is based on the rate and frequency.” Pirner relies a lot on material supplied by CCA Global Partners.

“We take their ads, cut them up, modify them and sometimes do totally our own stuff. But with CCA Global we have good ads to start with.” His television ads are used to establish the store brand and always have an offer or a hook. Store executives supply the creative input, and he often uses a local company for additional shooting or editing.

The ads, he says, emphasize that the customer can trust Cap Carpet, and that they’ll get a good value because if they can’t relate to both, customers won’t come in just because they have a good selection.

That’s a good strategy in today’s economy, says retail expert Jim Dion. Retailers should focus on promotional advertising that has a specific call to action, as well as an element of image building.

No matter what mix of traditional media a business chooses to use, ad pros are in virtually unanimous agreement about one thing—every business should have a decent website that comes up on the first page in a Google search. The web is to advertising today what the Yellow Pages were to advertising 20 years ago. It’s the first place shoppers, especially young shoppers, go to look for goods or services. And the web contains a whole lot more information. Every company needs to have a presence with an optimized website. A website also has the added benefit of being relatively inexpensive after the initial site is built.

That’s not to say that the Yellow Pages aren’t important. Many people, says Dion, still use the Yellow Pages as their first resource, especially in a large market, where the number of flooring dealers can be huge. There, an Internet search might turn up too much irrelevant information to sort through.

All of Floor Systems’ advertising, whether print or electronic, directs people to the store website, which Shaw helped produce. “We’ve had people come into the store from 125 miles away because they went to our website,” Vellieux says.

Web advertising can also be highly targeted and fairly inexpensive. Kalyn Asher, president of Dallas, Texas media consulting firm Asher Media, says it can be very effective to run an ad on the website of a local television station or newspaper, because they are generally among the most visited in any given area. Sophisticated web tracking technology allows a floorcovering ad to appear to a visitor who lives in the immediate area who might well be in the market for a new floor based on what they’ve been doing online. It’s a little big brotherish, but it’s also effective.

While television and newspapers can be the foundation of advertising for most businesses, it can also pay to think more broadly. Asher is an advocate of focusing on the core database of current customers and developing special deals just for them to generate store traffic. Direct mail and e-mail are good tools to reach them. For example, an event could be held and co branded with a local artist, which would not only bring in the store’s best customers but the friends and family of the artist as well.

In addition, in the right situation outdoor advertising can be very effective. Atlanta West Carpets, which has done television, print and direct mail in the huge Atlanta metropolitan market, decided to scrap most of its traditional advertising last year due to its high cost in favor of an electronic sign. The business is located on a major six lane highway, on a corner with a traffic light. It’s in an area that’s somewhat industrial, and the building is about 100,000 square feet, far larger than a typical floorcovering business. The expensive LED sign, half the size of a typical billboard, is strategically located so that most drivers can’t miss it. The sign is completely programmable and the store can change the message as often as it wants. Its primary function is to let people know that Atlanta West is a retail business as well as a commercial business, which isn’t necessarily apparent from its location and size. In conjunction with the new electronic sign, Atlanta West reworked the sign on the building, to emphasize flooring for consumers.

“We know people will read the sign, especially those who are stopped at the light,” says co-owner Blake Lewis. He says advertising in the Atlanta electronic media is too expensive, and he’s never had much success with print, other than direct mail.

Outdoor sign advertising can be very efficient, Asher says, in that it reaches a tremendous number of people. However, she says unless it’s fairly close to the business, as it is for Atlanta West, it’s not likely to be very effective.

Asher says that from her experience, most floorcovering retailers are using newspapers, radio, direct mail, a little television and even the Yellow Pages, and she recommends using at least two different media and having a frequent message. Spot cable is often too expensive for many retailers because it tends to broadcast well beyond their immediate market. With a medium like radio, she says, simply running ads for a week won’t do it. Retailers need a sustained presence. She recommends starting with an ad budget of 3% of revenues to see what that will buy, and, over time, moving up to 8% to 10% of sales, which is where Lumber Liquidators operates. If a company has access to matching co-op advertising through a manufacturer or distributor, a 3% investment might turn into 6%.

“Everything, no matter what you spend, comes down to cost per impression with your target audience and what’s going to be efficient and effective,” Asher says. “Most retailers are strong in the print category across the board. People see sales ads and bring them in.” She says print is better at targeting the ten to 20 mile radius around the store, which is as far as most people will drive.

That, however, has not been Vellieux’s experience. He’ll spend about 60% of his ad budget this year on television, with the rest on print. He’s tried radio but says it doesn’t work.

“We do advertise in newspapers, but we need to advertise in three of them to cover the area and it gets very expensive,” Vellieux says. “It’s no secret that newspapers are losing circulation and their prices are quite high and we can do a lot of television for what it costs us in the newspaper.” He puts together a quarterly ad budget and simply asks the station to devise a plan. Generally the station will even produce the spots as part of the cost. More often than not, the ads appear on network television rather than cable home improvement shows. He likes to advertise early in the morning and during evening prime time.

“We’ll be on for a week, every day, and then off for a week and I feel that works well,” Vellieux says. “If we have a sale, we’ll be on continuously for two weeks.” His company creates its own spots, often using material produced by Shaw. He recently ran a campaign on network television to promote an installed carpet special. Although he didn’t sell much carpet, the ad brought a lot of people into the store, many of whom bought something else.

“As long as advertising gets traffic in the door, it’s successful,” Vellieux says, whether the featured item sells or not. Vellieux’s print ads tend to be call-to-action ads, with a specific, limited offer. However, the television ads are often for building name recognition.

Vellieux has also found a lot of value in inserting advertisements in local Chamber of Commerce newsletters, as well as in another newsletter produced by a property managers association. Those ads are mostly for his mainstreet commercial work, which for the last 18 months has made up about 40% of his business.

“Advertising always comes down to a matter of value to the company,” says Cap Carpet’s Pirner. “There’s a certain amount you can spend in advertising promotion and have it pay. The real challenge is to spend and get the audience you want and have them know you’re there. You’ve constantly got to measure it and look at cost. Your financial statement should drive how much you can afford to spend.”