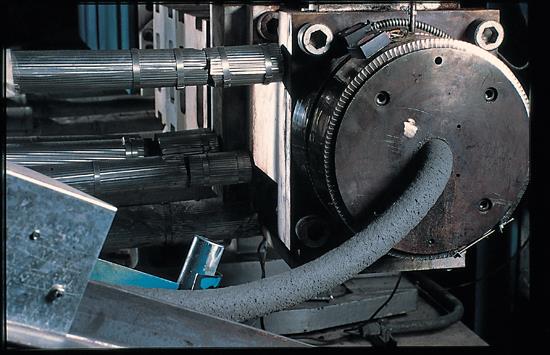 The recycling of material may be a cornerstone of environmental sustainability, but it is decidedly the least sexy cornerstone. Nevertheless, it undergirds the environmental progress of every flooring manufacturer and of the industry as a whole. As we as a civilization tread close to ecological disequilibrium, it’s fairly clear that businesses that make things-that pour a steady stream of products out into the world-ultimately have no place in the future of industry if they don’t take them back, or at the very least channel them for responsible reuse.

That wasn’t how the manufacturing industry was generally understood in the 20th century, that products at the end of their useful lifecycle would somehow revert and become the responsibility of the producers. That’s a much more complex model, and likely more costly-hardly something you would expect manufacturers to automatically embrace without a lot of convincing.

And it’s not as simple as recapturing and reusing waste, of course. The recycling process itself needs to be as green as possible, and all the way through reuse, embodied energies must be minimal. And on top of that, there is the all-important issue of the reclamation and recycling infrastructure itself, the scores of collectors, sorters, processors and recyclers that do the business of essentially reversing the process.

CARE UPDATE
According to the 2017 annual report from the Carpet America Recovery Effort, last year collectors captured 394 million pounds of gross collected carpet, representing a diversion rate of 14%. That’s down from 489 million pounds in 2016. Since the program’s inception in 2002, over five billion pounds have been diverted. Also, less carpet was sent back to landfills last year, 107 million pounds compared to 174 million pounds the previous year.

Part of what’s reflected in those numbers are the actions taken by collectors. On average, they’re avoiding collection of PET and nylon 6, which drops the diversion rate, but that means less waste at their end, hence the lower numbers for product sent back to landfills.

Last year saw more losses in the reclamation community. According to CARE, total employment fell 18% to 1,155 personnel, as some CSEs (collectors, sorters and entrepreneurs) shut their doors and others pared down their businesses and made labor cuts. The major issue that is jeopardizing these businesses is PET carpet, which accounts for the bulk of what is collected. So far, there’s little in the way of end-use markets for recycled PET carpet. And thanks in part to new global caprolactam capacity, which has driven down nylon 6 prices, the market for recycled nylon 6 polymer is also weak right now. And it would really help recycling’s economic equation if oil would climb over $80 a barrel to let some light through the delta between virgin and recycled prices. Currently, oil is at about $68 a barrel.

The most important thing to understand about carpet recycling in the U.S. is that it is divided into two systems, California and everywhere else. Everywhere else is covered by the Voluntary Product Stewardship (VPS) program, which uses $4 million of annual funding by carpet mills to offer a $0.02 per pound subsidy on any fiber type sold for recycling and $0.01 per pound for energy conversion. CSEs operating in these regions are generally hanging on by a thread.

Then there’s California, where CARE is partnered with CalRecycle as the carpet stewardship organization. California is a massive headache, and it’s certainly where CARE has to focus its efforts, but thanks to assessments of $0.25 per yard of carpet sold in the state and a range of subsidies, the recycling community is doing much better, relatively speaking. Many CSEs and recyclers are making money, and others are investing in new operations. But CalRecycle is putting constant pressure on CARE to meet the goals of the program, rejecting plans and levying fines, despite all the negative impacts on business, from reduced demand from countries like China to the lack of end-use markets for vast amounts of fiber-and despite the fact that California’s overall recycling rate, which includes all products, has been falling at an average rate of close to 50% over the last few years.

California is strict when it comes to carpet and environmental regulations, but San Francisco is even stricter. Earlier this year it passed new regulations regarding carpet purchased for city departments. Essentially, it prohibits any form of broadloom or cushioned carpet tile. Carpet tile must be free from PVC, polyurethane and latex, among other ingredients.

Recently, Interface wrote a letter to CalRecycle and CARE pushing for four revisions to secure its support for the plan: an increase in total grant money; an increase in subsidy guarantees from 12 to 24 months; the incentivization of grants and subsidies for products with the highest recyclability; and, most importantly, differential assessments, meaning higher assessments for carpet that is difficult to recycle, like PET.

Mind you, Interface specializes in commercial carpet and has its own takeback programs to recover its PVC-backed carpet, as does Tarkett’s Tandus Centiva, which recovers both PVC and PVB backings. Most other major carpet tile producers take back product, like Shaw with its EcoWorx products. By contrast, the bulk of carpet that is recovered and recycled through both California and the VPS program is residential broadloom.

In May, CalRecycle declined CARE’s plan for the third time, and a new version was resubmitted on August 17. CARE is hopeful that its results are getting closer to what CalRecycle can accept, but market conditions are still very challenging and end-use markets, particularly for PET, have still not been sufficiently developed.

POSITIVE DEVELOPMENTS
Fortunately, there have been several new developments that bode well for the future. One is Aquafil’s new recycling facility in Phoenix, Arizona, which takes in nylon 6 carpet and deconstructs it, capturing a stream of nylon 6 with 95% purity that is then shipped to Slovenia to be depolymerized, then turned into Econyl fiber. And it will also separate out limestone to sell to the construction industry.

The firm is already working on its next facility, this one in Sacramento, California, which should start operating next year.

New Jersey’s Carpet Cycle, which is just about to celebrate its 20th anniversary, has developed a new product called Quiet-Tech, a nonwoven acoustical insulation made from recycled fiber-and it can use any fiber type, which is great news for all that PET with nowhere to go. The product took five years to develop.

The firm also recently refocused its business. It stopped collecting residential carpet last year, focusing instead on the commercial market, which is largely carpet tile, and it also recycles ceiling tile. It also closed its facility in Newark when the lease was up and bought a building nearby to showcase Quiet-Tech. The acoustical product is made at the firm’s facility in Irvington.

Then there’s the Nonwovens Institute of North Carolina State University, which is one year into its three-year CARE grant, working to develop techniques to use PET in nonwoven fiber, melt-blown and spunbonded. And Verdex Technologies has developed a specialized nozzle that entangles nano-particles to make nonwovens with a fairly dirty fiber-with up to 6% calcium carbonate.

For about three years, Arrowstar has been working on a technique for taking PET and breaking it down into its two component molecules, ethylene glycol and dimethyl terephthalate, and then reacting them with other chemicals to create a urethane, which itself has many applications, from flooring underlayments to sports turf backing to spray foams and rigid foams. The initiative is led by Ralph Boe, previously president at Beaulieu America, who originally trained as a physical chemist.

Arrowstar is confident that its products can effectively compete with the price of products made of virgin material, and once the operation is up and running and batch volumes increase, it will become even more economical. Currently the firm is operating out of a facility in Dalton with a 2,000-gallon reactor, though it will expand to a 6,000-gallon reactor once production gains momentum. The firm is awaiting EPA pre-manufacturing notification, which should come soon.

Taken together, these new developments will give a badly needed boost to the recycling industry for both PET and nylon 6. And while they’re not all coming online at the same time, the next year or two should start to produce results that noticeably move the needle. And if the price of oil creeps up another $10 to $15 a barrel, for the recycling industry it will only be a good thing.