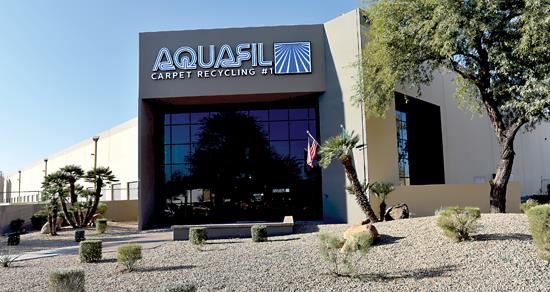 Aquafil’s first carpet recycling facility, an investment of $25 million, started up earlier this year. At the grand opening event, held on December 13, 160 guests were in attendance, including customers, suppliers and sustainability experts.

Aquafil Carpet Recycling (ACR) #1 processes nylon 6 carpet, shipping the recycled nylon to its depolymerization facility in Slovenia, where it is reduced to caprolactam, then processed into new Econyl fiber, both dyeable and solution-dyed.

ACR#1 uses two production lines to process annually 36 million pounds of post-consumer carpet, yielding 12 million pounds of Econyl 100% recycled fiber. So for every three pounds of carpet that comes into the facility, a pound of fiber is generated. The remaining weight of polypropylene backing and calcium carbonate is sold for injection-molded products and road construction materials, respectively.

The Phoenix facility is the first of five in Aquafil’s long-term plan. The second, just outside of Sacramento in Woodlawn, California, is under construction and slated to open later this year.

ACR#1 is partnering with Planet Recycling, a collector and sorter with operations in Phoenix and San Diego, and will also work with other collector and sorter businesses in southern California. ACR#2 in Woodlawn will partner with businesses in northern California, and it will also receive funding from AB 2398, California’s carpet stewardship law, which disperses grants and subsidies from funds generated through assessments on carpet sold in the state.

The recycled Econyl fiber is used to make new carpet, and it’s also increasingly used for apparel and fashion brands. To date, Econyl fiber is sold to over 400 brands, including Levi’s, Speedo, Adidas, Alexander McQueen, Gucci and Stella McCartney. A high-end Chilean sunglass producer also recently partnered with Aquafil to use Econyl in its products.

Just over a year ago, Aquafil went public on the Italian Stock Exchange, though the family still retains 58% of the shares. The move helped the firm generate capital for investments, including the ACR facilities.

According to Giulio Bonazzi, Aquafil’s CEO, the firm may ultimately build a depolymerization facility like the one in Slovenia on U.S. soil, but not until it has enough volume, which will require five or six ACR facilities. Bonazzi reports that the idea of creating a network of carpet recycling facilities actually came out of a conversation with the late Ray Anderson, founder of Interface, back in 1998.

“In a circular economy, we should manufacture everything with the end in mind,” Bonazzi said at the grand opening.

Also at the opening were Dr. Dayna Baumeister, co-founder of Biomimicry 3.8, and David Oakey, the renowned carpet designer with Interface. Oakey said, “I think Ray Anderson is smiling today.”