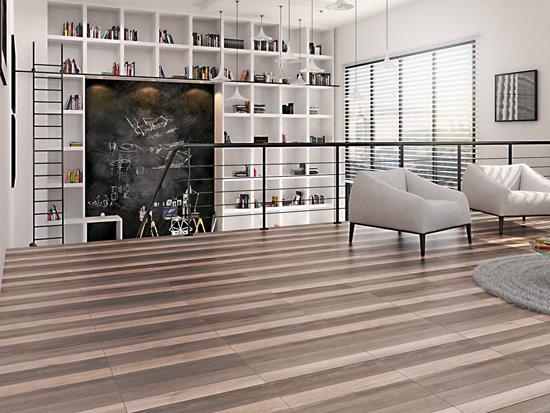 Revestir 2015, the 13th edition of the annual Brazilian floorcoverings trade show, was held March 3 to 6 at the Transamerica Expo Center in Sao Paulo. In addition to floorcoverings, the Architecture and Construction Fashion Week, as it is marketed in Brazil, also featured an International Forum of Architecture and Construction, which promoted five themed events during the fair, featuring conferences with architects and designers from around the globe. The spirit of the dialogue was about collaboration and creativity, and emphasized that Brazil’s products are equally matched for the domestic and international markets.

Revestir featured over 235 exhibitors, and was attended by 61,000 people, which marks a 20% growth over 2014. Walking through Sao Paulo, it is immediately clear what a powerhouse Brazil’s economy has become. Greater Sao Paulo has a population of over 20 million, making it the 10th most populated city in the world, and a GDP of over 430 million, ranking it in the top 15 richest cities. Sao Paulo has been in a period of economic stagnation since 2013, but it’s hardly noticeable when walking through the city. Brazil is a country in the works, as evidenced by the construction sites at every turn. Housing, retail space and office space are all in demand, and attest to why over 90% of Brazil’s tile production is being consumed internally.

Brazil has seen significant changes in its interior design industry. What was once a market for cheap labor and mass production has transitioned to a service based economy with rising labor costs and the emergence of consolidated home improvement stores. With the growing price of construction, a new demand has arisen for DIY products. Click lock floating laminates, all-in-one vanity combos and easy-to-install vinyl tiles were all prominently featured at Revestir. And companies offering complete packages for kitchen and bath were very popular with the public.

Environmentally conscious consumerism is recent in Brazil, but it is influencing a large proportion of the population. Brazil’s Amazon Basin is home to one third of all living species, and plays a key role in global carbon cycles and climate change. In the wake of recent serious droughts, environmentalists are now driving the public’s awareness of the positive impact of using more eco-friendly products in their day-to-day lives.

While Brazilians have traditionally chosen wood as their preferred residential flooring surface, conservation efforts have made wood a precious commodity with a high price tag. But with the insatiable trend of wood-look ceramic and porcelains already popular worldwide, Brazilians have found their ideal match with tile. Wood looks were shown throughout the show in almost every booth, in every size and shape. Most woods focused on natural shades, with some styles featuring artistic accents and distressed finishes.

Dimensional wall tiles were a major trend at Revestir, typically in white or neutral color palettes. And several products were “retro,” a term often used by Brazilians in reference to mid-century modern pattern sets influenced by geometry and botanicals. These wall tiles were almost exclusively in large formats, allowing for a seamless appearance when installed. Often paired with wood looks, the overall style was refined yet organic, and perfectly in tune with the Brazilian furniture and fabric styles on display throughout design stores in Sao Paulo. The ceramic tile manufacturers showing the most innovative assortments were the major players in Brazil: Portinari, Portobello, Eliane and Laufen. These companies put their efforts into creating the regional trends instead of copying them.

Mid-century patterns were also seen overlaid onto hexagons, a popular look at Revestir. Most hexagons were smaller in size, representing a more decorative element. Any trend popular on a square or a rectangle was applied to hexagons, and they could be found in cement tones, wood looks, bright colors and dimensional wall tiles alike. This trend was also on display at Cersaie and Surfaces, illustrating the popularity of hexagons worldwide.

Cement tiles, both ceramic and real cement, represented the more avant-garde and high-end offering of Revestir. Cement manufacturers like Solarium and Castellano created stunning looks with dimensional pieces and textures that seemed like they could only be made of natural stone. On the ceramic side, Portinari and Laufen displayed creative collections with dimension and stained concrete color. Although Brazilian manufacturers are just starting to press very large sizes in the country, concrete porcelains were pushing the barrier of large format.

Although Brazil’s domestic market has a preference for locally manufactured products, the international technologies were still making heads turn, primarily in the form of porcelain and agglomerate slabs. Solid surfaces were shown in multiple booths, typically in muted tones and natural stone patterns with book-matched effects. The leading innovators in thin tile, such as Laminam and Fiandre, made impressive appearances with beautifully displayed large panels. Cosentino and Caesarstone had some of the most majestic booths at Revestir, and are now promoting multiple thicknesses in their color offerings.

Brazil’s tropical and mid-century modern aesthetic lends itself well to decorative block walls, seen throughout the city with beautiful foliage peeking through. Certain companies, such as Manufatti, exclusively offered a wide range of shapes as well as an integrated living wall package. The trend is so widespread in Brazil, however, that ceramic manufactures such as Portobello featured decorative block walls as well. We’ll have to wait and see if this trend makes it to the U.S.