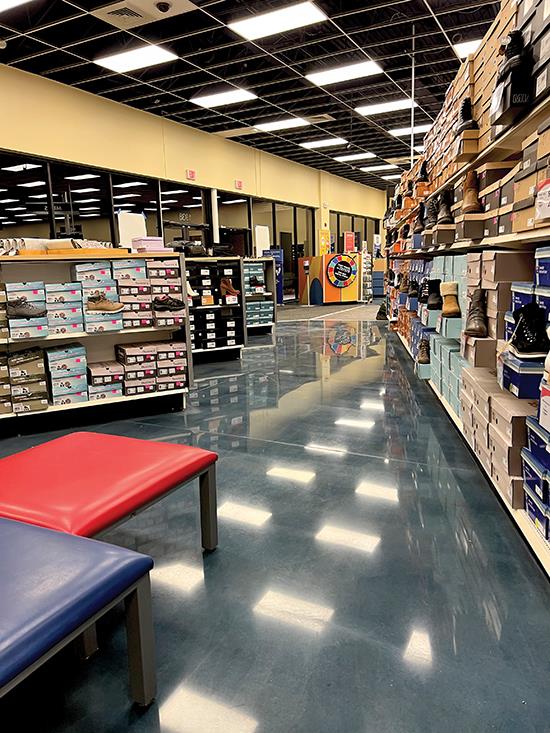 For years, polished concrete has been something of a dirty concept in the floorcovering world, as it negates the need for traditional floorcovering. Regardless, it has been enthusiastically accepted by architects and designers as well as end users seeking an industrial aesthetic. While many flooring contractors have traditionally subbed out their polished concrete work, today, savvy contractors are taking the trade in-house and, thereby, netting the profits.

CONCRETE POLISHING COMES TO AMERICA
In 1986, the first two HTC concrete grinding machines arrived in North America. One went to Knoxville, Tennessee and the other to Seattle, Washington. At the time, Jennifer Faller owned a Seattle-based surface preparation and protection distribution company, and a client named Ray Wiggins invited her to test the machine in Seattle, which had been ordered by his brother, owner of Innovatech, a flooring equipment manufacturer.

Faller and Wiggins uncrated the machine, bolted the diamonds on the bottom and got to work. By the time the weekend was out, they had ground and polished the floor of Faller’s office, and, using her existing knowledge of surface preparation and decorative concrete, Faller had applied a reactive product that colored the floor, as well. Later that week, Faller did the same in her warehouse, making a video of the process.

A month later, Faller and her team completed a big concrete polishing job in downtown Seattle. Architectural Digest did an article on the project, using the floor as “the big wow,” says Faller, “and I became known as the person to talk to about polished concrete.”

Faller soon took a job working for a chemical company that provided chemicals useful in the concrete polishing business, such as densifier, and produced a seminar as a partnership between that company and Innovatech. Within months, she was in the field teaching seminars on concrete polishing. “There was a ton that we didn’t know then and a few things that we did,” she recalls. “But concrete polishing was a remarkable thing, and people wanted to know about it.”

MARKET ACCEPTANCE
For many, the awareness of polished concrete’s aesthetic began with Silicon Valley start-ups. The raw look became something of a design standard for the sorts of technology firms that preferred open spaces to yards of cubicles and foosball tables to formality. But while the aesthetic of the material is well-loved, some of its features are not. Polished concrete as a finished surface can create an unpleasant acoustic atmosphere without significant mitigation efforts, can contribute to slip and fall accidents, and doesn’t provide any comfort underfoot. It’s also costly at the outset-Faller reports polished concrete is around $5/square foot on the high side, though it requires little to no upkeep over the course of its useful life, which is as long as the slab’s. “Generally, polished concrete has the lowest lifecycle cost of all flooring,” says Faller.

In addition to workspace applications, polished concrete was quickly adopted by the retail sector. “Retail was the number one place for polished concrete. It probably still is, but activity has been impacted by less new construction in retail,” says Faller.

While activity in both the retail and workplace sectors was negatively impacted by the pandemic, Faller believes that polished concrete has crested the arc of acceptance, opening doors for it to be used more widely and commonly, noting that end users who may be more design followers than design leaders now feel comfortable opting for the material. K-12 facilities and urban mixed-use facilities are now frequently making use of the material, says Faller.

Polished concrete is also taking marketshare in areas that aren’t as visible to the public, such as the industrial sector, where spaces like distribution centers benefit from the material not requiring upkeep. “Many car manufacturers in the Detroit area now have polished concrete floors,” says Faller. “It’s easier to maintain than epoxy. It never needs to be recoated. It’s easy to clean and sweep. There are many flooring contractors in Michigan who offer concrete polishing because of the need.” Generally, these types of facilities don’t polish concrete to high levels. but utilize a level-one polish, which is a uniform flat to matte finish, whereas retailers often use a glossier level-three polish in their consumer-facing zones.

Polished concrete is also gaining ground in military and government facilities, which are pulling up existing flooring in aged buildings and exposing concrete rather than installing new floorcovering.

However, as polished concrete has, in some cases, moved from being a portion of a job to the bulk of it, some flooring contractors have taken to looking at that work they are subbing out as lost income. Today, says Faller, “There are flooring contractors putting a toe in water, and then a foot, to decide if they are done giving that money away.” As an added benefit, those who choose to move concrete polishing in-house may find that the general contractors they partner with are pleased to have a single flooring entity to work with, rather than two.

“The floorcovering guys that have a chunk of liquidity and are capable of putting $100K into a polished concrete division pretty much have built-in business,” says Faller.

Of course, launching a successful polished concrete operation is about more than financial investment; it’s about investment in knowledge and talent, too. “The best bet is if a flooring contractor has someone on their crew who knows how to polish, or finding someone who already knows the process,” says Faller. “There is a lot of [talent] floating around. In addition, they need a person who can manage, organize and lead, and the thing they need to be best at is details. In polished concrete, the whole floor is one big detail. If they have those two people, they could get up and running in a month with roller skates on.” Of course, those are significant ‘ifs,’ and it sometimes takes contractors years from their initial commitment to completing their first project. One of Faller’s roles today is advising floorcovering contractors through the process of getting a polished concrete division up and running.

Once a division is operational, flooring contractors can expect polished concrete jobs to take roughly double the time that installing floorcovering might-though there are certainly many variables that factor in. “It doesn’t have to be twice the inconvenience,” clarifies Faller, “but it may be twice the days.”

Faller says there is one particular situation in which polished concrete is not the best option: when an end user wants an ultra-uniform finished surface. “The only way to get that is with something manufactured in a factory,” she says.

In some cases, those seeking nearly perfect finished surfaces will opt for an overlayment poured atop the current slab to provide a new top layer, which is then polished. Faller notes, “Those cost tons more-probably three times more than regular polished-and there can still be issues where the new floor cracks. In addition, the top layer isn’t as durable as a regular polished slab, and people often misunderstand that. The overlayments are also more vulnerable to traffic patterns and staining. There are some great ones out there-there have been tons of advancements in the field-but they still aren’t equivalent.”

One additional benefit for the flooring contractor that invests in concrete polishing: the field is somewhat more immune to supply chain challenges than floorcovering due to the fact that, so long as a contractor has the machinery, they need few materials, and those they do need are generally domestically produced.

THE CHALLENGE OF QUANTIFYING POLISHED CONCRETE
As an industry, one of the challenges that the polished concrete industry faces is determining how much marketshare the material accounts for. Unlike a material that requires a purchase, it can’t be tracked with sales. And as polishing can be done on new slabs or slabs that have been in place for decades, it can’t be tracked easily via construction or renovation data. In addition, it often makes an appearance as a piece of a commercial project, in conjunction with floorcoverings, making quantification of its square footage even trickier.