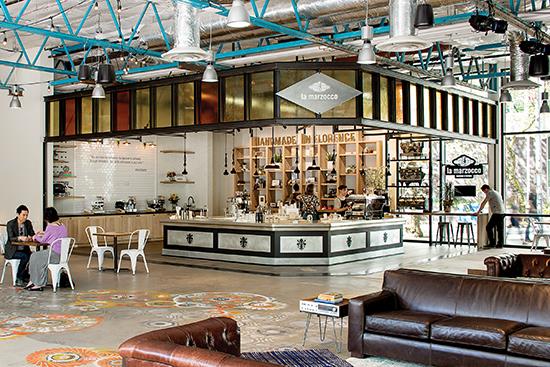 The use of polished concrete as a finished floor has been trending in the retail and public space sectors for a couple of decades, but over the last dozen years, it has gained huge traction in other parts of the commercial market, mainly the corporate and education segments. Demand for concrete frustrates floorcovering manufacturers, but architects and designers as well as end users love it as a material, valuing its high-performance and low-maintenance profile. And the trend shows no sign of slowing.

In Floor Focus’ most recent Top 250 Design Survey, published in October 2019, 79% of surveyed architects and designers reported using finished concrete in their projects, up from 72% in 2018. And of those reporting using finished concrete, it accounted for an average of 17.2% of total square footage, up from 14.5% in 2018. Concrete is a more labor-intensive product than hard surface floorcoverings, though it can potentially last much longer.

Polished concrete took off in the corporate sector in the years following the Great Recession, its raw industrial aesthetic meshing well with the dynamic open-office environments of the emerging technology companies. These days, it’s generally used with other floor finishes-mostly carpet tile-in the design of a space, often finished in a uniform polished visual.

Concrete’s appeal, particularly to the architect and design (A&D) community, derives from the sense of concrete as an authentic building material. Exposing the hidden substrate and expanding its use from its core function into the aesthetics of the finished interior suits the sensibilities of today’s A&D firms. That streamlined functionality is itself the elegance that draws in architects and designers, and that has led to such a vast expansion of concrete’s share of the commercial floor space.

Over the last decade, its use has grown more sophisticated. While concrete has substantial design limitations, designers have discovered techniques to create various effects and surface visuals. This includes creating the full range of gloss levels from matte to glass; staining to create organic effects and stone visuals or to highlight and bring out the beauty of fractures and distressing from exposed industrial floors; and using paints and dyes to create subtle organic flow or even patterns and graphics.

Also, designers have evolved in how and where they use concrete in the space, and how it interacts with the other interior elements. And according to Jeni Champion, an associate and senior designer with ID Studios, specifiers are getting better at specifying other products that work well with concrete. With the disappearance of interior walls in the open-office environment, flooring’s role has evolved and expanded into zoning and creating different environments and moods, and these days, A&D firms are pouring their creative energy into new ways to use concrete, carpet tile, porcelain, resilient flooring and even hardwood to map out the commercial landscape.

Floor Focus reached out to three design firms-SkB Architects, ID Studios and Perkins+Will-to help showcase some of the distinct ways that concrete is being used in the commercial market.

While the rest of the radio station relies heavily on carpet tile from The Mohawk Group and Bentley Mills, in the Gathering Space the original VCT was scraped off to expose the original concrete slab, which was then polished and sealed. In some sections, like where trenches were cut for electrical wiring, a topping layer was added.

In a corner of the Gathering Space is the 1,100-square-foot La Marzocco café and showroom, set off from the main floor with an installation of Brushed Oak Bainbridge, an engineered hardwood from Kentwood Originals. The café, also designed by SkB Architects, is independently owned.

Shannon and Kyle Gaffney, co-founders of SkB Architects and co-lead designers of the project, crossed paths with Jonathan Wakuda Fischer, a graffiti artist, at one of their annual salons for creatives, and they tasked him with decorating the concrete. The Gaffneys were so pleased with him and his work that they brought him on staff, largely as a muralist. (His work graced the February 2017 cover of Interior Design magazine.)

Using spray paint that was subsequently sealed to protect it, Fischer covered much of the concrete floor with a range of captivating abstract patterns fading into each other, in industrial/mechanical motifs that somehow also create an impression of biophilia. Kyle Gaffney reports that the designs have held up well in the four years since they were first created, with only a little touch-up necessary near the heavily trafficked entrance.

Earlier this year, ID Studios, based in San Diego, California, completed the new headquarters for Neurelis, a neuroscience-based pharmaceutical company. The 12,500-square-foot space occupies the top floor of a new three-story building in San Diego that overlooks Torrey Pines State Natural Reserve. ID Studios further enhanced the connection to nature through its design of the space, which features new finished concrete along with carpet tile and LVT.

In this instance, the concrete was a new pour and the completed look-a subtly organic visual in a warm grey with a honed finish-is a great example of trends toward a calm and welcoming minimalism. It’s modern and techy but not cold and sterile.

Also noteworthy is how ID Studios paired the concrete with Milliken’s Arcadia carpet. The solution-dyed nylon 6,6 carpet tile, particularly in the Shoreline design utilized by ID Studios, embraces biophilia with patterning that, while reminiscent of patterns of tidal sand, also has the look of stratified rock and even burled wood. The Mohawk Group’s Select Step LVT was used in the break area.

One of the challenges with using finished concrete is that it can make the space loud, and in recent years, architects and designers have developed tools for acoustical abatement. For this project, ID Studios not only used carpet to dampen sound, but it also used acoustical baffles suspended from the ceiling, along with white noise machines.

The exposed concrete starts at the entry and flows into the reception area, and it is also used down the main corridors of travel. Carpet tile is used throughout the rest of the space, including the workspace and conference rooms.

One project that really celebrates concrete as an architectural material is the headquarters of the American Society of Interior Designers (ASID) by Perkins+Will. The 8,000-square-foot office in Washington, D.C. is the first project to achieve WELL Building Standard Platinum certification, and it is also certified LEED-CI Platinum. Among other things, the office features a circadian lighting system that mimics the daily color temperature cycle of daylight, and it includes an automated window shade system for adjusting to glare and weather conditions, along with other biophilic strategies.

In addition to concrete, the project includes a range of carpet tile from both Shaw Contract and Interface. Concrete flooring was used in the entry corridor, the Material Connexion library, the copy room, the café and around the edges of the open workspace in a neutral grey matte finish with a fairly rustic appearance that generates a dynamic overall visual. Random white flecks, organic shifts in shade and a range of imperfections convey character to the concrete. In addition, Perkins+Will painted anthropomorphic figures-in a style derived from the college textbook images familiar to all students of architecture and design-on the floor of the break room.

In another nod to concrete’s role as a building material, Perkins+Will created concrete columns in the entry corridor, and it painted on them similar graphic depictions of the human form. Similar forms, in dynamic poses, are featured on the walls of the copy room. According to Ken Wilson, design principal at Perkins+Will’s Washington, D.C. office, research has shown that these sorts of human shapes and forms actually reduce stress and enhance concentration.

ASID’s headquarters accommodate up to 40 employees, using a free-address system where on a daily basis people choose the spot best suited to their current tasks from a range of workplace environments.