One on One with Anthony Minite - December 2006 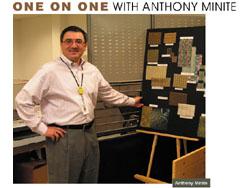 In 2001, Anthony Minite was given the seemingly impossible task of combining Bentley Mills and Prince Street. Bentley, the California company that had enjoyed the reputation of design star back in the 80s, was at the low point in its 22 year history. So was Prince Street, the East Coast producer which had been wowing designers in the late 80s and early 90s. Sales were at an all time low. So were their brand images, and their relationships with customers. And most significantly, both were losing money.

The first step toward recovery was to move Prince Street to California and consolidate it with Bentley. The second and most important step was to bring in Minite to get everything back on track.

And he did. Since early in 2002, when Anthony Minite was named president of Bentley Prince Street, the company has made a remarkable recovery and sales are up to $145 million. Most significantly, the company is profitable again, and it’s regained its status as a design leader. Since 2003, Bentley Prince Street has consistently ranked at or near the top of the Focus Top 250 Design Survey in the Design, Quality and Service categories.

Last month, we caught up with Anthony Minite and asked him how he guided the company back to the top.

Q. What shape was Bentley Prince Street in when you took over?
A. When I came out here, the company had lost its identity.

We focused a lot in the beginning on putting our culture back in this business, a culture that’s unique to Bentley Prince Street, but that also truly ties back to our corporation, Interface Inc. We infused a passion back into the business I believe had been lost. Without question I promoted the team approach to success—we call it QUEST, for Quality Utilizing Employee Suggestions and Teamwork—and that includes social, economic and environmental success.

I think I gave our employees a feeling of, ‘Wow, this is a great place, a great company. They have a vision, and I can make a difference.’

Q. How did you build BPS into a design leader again.
A. I wanted to maximize the opportunities that made us successful in the first place. Clearly design was one of them. I wanted to encourage our design team to flourish and create and put our two strengths together—the Prince Street history and the Bentley history. What a combination.

Doing what we say we’re going to do is another opportunity I saw—that’s service.

Q. When you took over, didn’t most of your business go to the corporate sector?
A. Yes, and that got us in trouble when the corporate market went into a slump. Since 2002, we’ve worked hard at achieving a very solid market segmentation strategy. Today our business is 55% corporate, 45% divided between healthcare, education, retail, hospitality, and this whole urban move to condos. That’s a big chunk of our business, all this city living work that’s being done.

Q. How have your priorities changed now that you have Bentley Prince Street back on track?
A. We had two great names, Bentley and Prince Street, and combined they had to be as powerful as they were historically, when they were separate companies. Our marketing team under the leadership of Catherine Minervini has stayed very focused on our brand. Our advertising, our marketing, our product—they’re all connected—and when you stay on message like that, it starts resonating with your customers. We haven’t tried to be all things to all people. We’ve focused on what we can do best, maximizing the broad range of our tufting and piece dyeing capacities to best fit our segmentation strategy and our opportunities to grow.

Q. Is the condo business served by your high end residential division, Prince Street House and Home?
A. We break residential out two ways. Contract residential—that’s what we call the condo business—is just shy of 10% of our business today and it’s produced by Bentley Prince Street. That’s projects like Battery Park Center in Manhattan, where we did 45,000 yards of corridor work. We’re doing that kind of work in every market, not just in the major markets. You’ve got this trend in downtown Kansas City, in Grand Rapids, Michigan and all over the country.

We have a strategic alignment with Jack Mishkin. He’s kind of the lead with our design team here. He’s designing products for Bentley Prince Street, J. Mish and Prince Street House & Home.

We’ve got a lot of good competition out there. Our differentiator—bar none—is the talent we have working for us, whether it be the line supervisor on the third shift or someone at the customer care desk. Bentley Prince Street is truly about having the very best people, and my job is to be the coach, the mentor, the person who can keep people motivated, so they know they’ve got a great place to work.

Q. Growing up, did you ever imagine doing what you’re doing now?
A. I never anticipated selling carpet. Actually, I have a funny career path. I was born and raised on Long Island, and in the early 80s I was deeply involved in the fire department; it’s something that’s been in my family for a long time. I became a volunteer fire chief, actually the youngest chief in the history of North Lindenhurst, New York. It was a big part of my life and that’s where I really earned my leadership stripes.

It was one of my passions and I thought I wanted to do it as a career, but things change. I actually went into healthcare sales, and then this opportunity came up with Bentley Mills. It was my first move off Long Island.

Q. To what extent do you follow a common philosophy at Interface Inc.?
A. If you look at Interface Inc. worldwide, the common connectivity is the passion for sustainability by 2020. Whether it’s Interface Fabrics, InterfaceFlor Commercial, BPS, Interface Asia or Interface Europe, each of our business units has a common goal, Mission Zero—to be fully sustainable, with zero footprint on the planet, by the year 2020.

Over the last decade, we’ve reduced water intake 68%. We’ve reduced energy consumption 56%. And we’ve reduced waste sent to landfills by 94%. Our VOC’s out of this building are less than five tons a year. They used to be 15 to 20 tons. And our absolute greenhouse gas emissions are a quarter of what they were ten years ago.

Q. How hard is it to make carpet in California?
A. No question, it’s a more difficult state to manufacture in, but over the years it’s allowed us to become a better, more efficient company. What we do with our ISO 9001 and 14001 procedures, and what we do to reduce greenhouse gas emissions and VOCs have made us not only economically solid and well grounded, but it’s made us money.

Here in California, a new bill called Assembly Bill 32 was just signed. It’s an absolutely stringent mandate to reduce greenhouse gas emissions back to 1990 levels. The good news is that BPS is already there. We’ve done everything required of a company to be there, to the point where we were just recognized by Environment California, the research and policy center out here, as one of 12 companies that save money by reducing global warming pollution. It was a huge honor for us.

I’ve always gone full blast, 100%. I’ve had to build a really solid team around me and we’ve had great success over the last few years building this company back to its celebrated position in the marketplace.

By the way, this is my dream job. I’m enjoying every minute of it.

Q. Where do you go from here?
A. We’re going to stay focused on our brand identity and on our segmentation strategy. We’re going to maximize the fact that we’re the largest commercial carpet manufacturer on the West Coast—this is where I’m going to put a lot of juice.