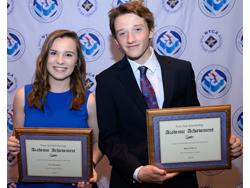 Arlington, VA, April 26, 2019-The National Tile Contractors Association (NTCA) announced the 2019 recipients of the NTCA Tom Ade Ceramic Tile Scholarship as well as the winners of its project of the year, person of the year and Joe A. Tarver Award.

Scholarship recipients were awarded $5,000 and recognized during the association's annual awards ceremony that took place during the Coverings trade show in Orlando, Florida. As part of the award, scholarship winners received an expense-paid trip to the trade show.

Recipients are as follows:

● Residential Project of the Year: Hawthorne Tile for “His & Hers” Bathroom

● Commercial Elite Project of the Year (projects over $1M): Superior Tile & Stone for the Palms Sky Villas in Las Vegas

During the ceremony, NTCA named Dale Kempster of Schluter Systems its 2019 Tile Person of the Year.

The final award of the evening was the prestigious Joe A. Tarver Award for service to the tile industry given to Tom Ade, owner of Filling Marble and Tile in Egg Harbor City, New Jersey.