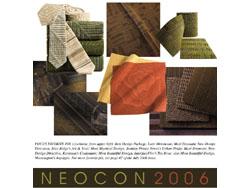 The word in the halls was that it was “just like old times, only better.” This year’s NeoCon was characterized by more original styling and more exciting showrooms, playing to record crowds. You could actually hear business being done on the floors; many designers came to buy, with specific projects in mind.

It’s evident that the corporate market is back, along with a new surge in non-corporate sectors—especially hospitality and healthcare, and most particularly in the upper end hotel and assisted living segments of those business sectors. The recession that began in 2001 made both designers and architects reach out beyond their traditional corporate projects, and the show was filled with fresh new designs for all those fresh new market applications.

NeoCon has been a barometer of the changes the economy, and in turn, our industry, have endured in the last five years. Those pre-2001 NeoCons, when the corporate market was strong and the bulk of commercial carpet producers specialized in products for that market, were buzzing, but not quite like this year’s NeoCon. Traffic slowed in the NeoCons that followed, and most carpet producers were scurrying to develop non-corporate lines to appeal to an A&D community that was desperate to find new markets.

This year, the commercial economy is definitely back, not only in the revived corporate arena, but also in the non-corporate arenas the design community has been embracing and reinventing for the last five years. Virtually all carpet producers are now serving a spread of markets with not only corporate lines, but with upscale, multimarket collections as well as more finely targeted products just for hospitality, senior living, education, retail, and a completely new market: upper end condo living. As a result, the commercial market is more exciting than ever.

Another notable change, which has also been evolving for the last five years, is the growth of carpet tiles. Not only has that product broken out of its original “corporate only” mold, but virtually all carpet manufacturers now have thriving carpet tile lines for an ever expanding scope of applications.

Also big this year: impressive investments in technology toward greener business practices. Many manufacturers are using simulated sampling systems now, thanks to the innovative Chattanooga firm Tricycle. And as you’ll see in the box on page 55, Tricycle has now taken the concept of simulated samples to another level.

While the use of simulated samples will cut down dramatically on waste, Tricycle isn’t the only firm contributing to the green revolution these days. In fact, everyone in the floorcovering business was talking green at this market. In just a few short years, the commercial flooring market has cranked up its environmental initiatives to the point where it’s become the leader in U.S. industry in that arena. While Shaw Industries is still low key about its Evergreen recycled nylon plant, which is scheduled to reopen sometime next year and will dramatically change the industry’s recycling efforts when it does, Interface Inc. unveiled its new Mission Zero branding initiative at NeoCon. Mission Zero articulates the company’s long standing promise to make its products and its manufacturing facilities worldwide have zero impact on the environment by the year 2020.

Also of note: many of the world’s leading porcelain and stone manufacturers showed up at NeoCon for the first time. We’ve been talking about the opportunities for porcelain and stone in the commercial market for five years now, but it seems to have taken a slight downturn in the residential ceramic tile business to get the world’s major players to come to Chicago.

While most of the innovation at NeoCon 06 was clearly on the soft surface side of the business, we saw a handful of original looks on the harder side, too. The biggest trend by far in that market: the upmarket growth of luxury vinyl tiles, where the most creative designs were found.

By most accounts, attendance at NeoCon 06 was up more than 30%, a remarkable jump.

For a look at the players, see the July 2006 issue of Floor Focus Magazine. 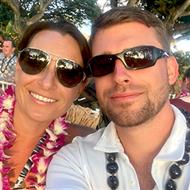