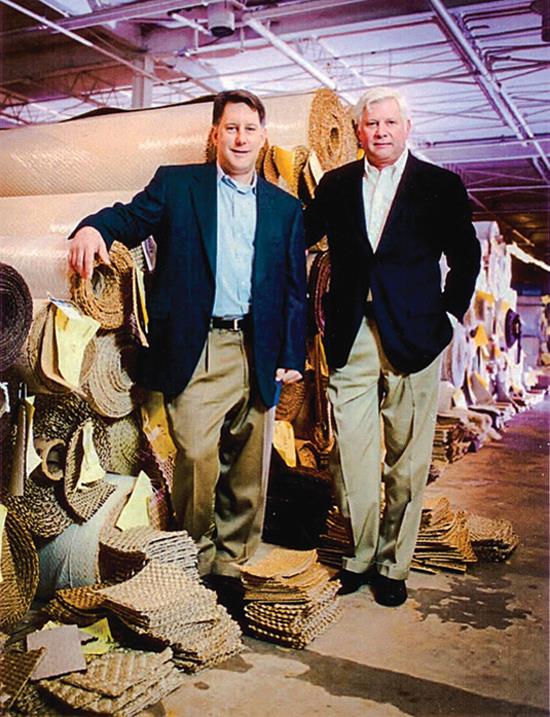 Myers Carpet and Flooring Center was the first carpet wholesale and retail business in Dalton, Georgia. Nearly 59 years later, the residential-focused business has locations in the hearts of both Atlanta and Nashville, and recently acquired the assets of Nashville Carpet Center, a more than 40-year-old downtown retailer with a strong focus on the commercial market.

CHOOSING A PATH
Rick Myers, son of the founder of Myers Carpet and Flooring Center and current president, estimates that there were once 130 carpet retailers in Dalton. Today, there are around 30. How has his firm managed to survive in such a volatile market? First and foremost, Rick believes that the move to expand beyond Dalton into the big city markets of Atlanta and Nashville was the best decision that his brother and partner Ray and he ever made.

In 1987, the company established a 3,000-square-foot showroom on Peachtree Street in Atlanta. Six years later, it upgraded to a 35,000-square-foot location on Northside Drive in the trendy and upscale Buckhead area. Then, in 1998, the company opened the doors to its Nashville store. Both of these locations draw a significant amount of decorator business from the local community.

In addition, the company has differentiated itself by focusing on the high end of the carpet and rug business. Soft surface accounts for around 85% of the firm’ total sales, and with that business, says Rick, “we have made a conscious decision to go high end, to separate ourselves, and we have a brand there. We are the largest wool retailer in the Southeast and one of the top ten in the country. Our goal is always to be the highest end store in the South.”

THE BOON OF THE WORKROOMS
Another way that Myers has evolved to stay ahead of the pack is by capitalizing on its ability to make custom rugs in house. All three of its stores have rug workrooms, which greatly increases the options that the retailer can offer its customers. In addition, the company makes custom rugs for Couristan and Shaw.

“The majority of our business is retail,” says Rick. “And we’re doing a lot more labor. We’ve added a lot of workroom employees. Our customers can choose any sample in the showroom, and we can cut it to fit any area and make it a finished rug. We stock more high-end wool, sisal and seagrass than anyone and have a wide canvas binding machine for seagrass and sisals. We can do border rugs, leather bound rugs, hand serged rugs, even logo rugs.”

Rick believes that having his headquarters in Dalton is a significant benefit in sourcing the high-end materials that he chooses to sell. “Dalton has become a hub for high-end imported products,” he explains. “Godfrey Hirst carpet is made in Australia, but its distribution center is only four miles from our location in Dalton. Kane’s distribution is nearby; Stanton’s and Nourison’s are here, too. Dalton is naturally set up for carpet distribution. It’s the perfect place to import high-end products for distribution between Chicago and Miami. I-75 makes it easy to move products.”

EXPANDING THROUGH ACQUISITION
Nashville Carpet Center, started and run by Van Gilmore, is a single-location operation that is heavily focused on commercial work (60%). At the age of 77, Gilmore was ready to retire. He had sold the downtown property where his business was housed, and he needed an exit strategy. More than a year ago, Myers and Gilmore began discussing the idea of Myers buying Nashville Carpet Center.

In late February, Myers announced its acquisition of the assets of the operation, which Rick believes will double its Nashville business. To start, the Nashville Myers Carpet and Flooring Center and Nashville Carpet Center will exist separately, both remaining in their current locations, but within the next few months, they will move into a single location.

Rick is the first to note that the businesses are very different—and he sees that as a plus. Acquiring a business that is commercially focused means that Myers learns and gains a new business model. “In Nashville, the gentlemen wore ties and were more traditional,” says Rick. “They have 15 employees in total, four retail salespeople and three commercial. It’s a different animal from Myers, and we are hoping to learn. We have a lot of respect for Van. He will stay on for a few years to ease us into this. He’s old-school Nashville and knows everyone.”

THE OUTLOOK
Rick’s three sons are now in the family business, making them the fourth generation of the family to work at Myers—Rick and Ray’s grandfather also worked for the business that his son started. Justman manages the Nashville warehouse, Hunter works in the Atlanta showroom and Sinclair is in sales at the Nashville store. Ray has children too young to yet be working.

Rick Myers has confidence that the firm is set up for success for the next generation, having been built on a foundation that has sustained it for 58 years already.

“We made it through the recession in one piece, which was a struggle at times, but we didn’t even lose anyone,” he says. “We might not have been able to do that if we weren’t so mature. Our buildings in Dalton and Atlanta were paid for, so we didn’t owe the banks a lot of money. Today, our Nashville building is paid off, too. We have found our brand, and we are sticking with what we know. Last year was the best year we’ve ever had, and with the acquisition, I don’t see why 2016 won’t be even better.”