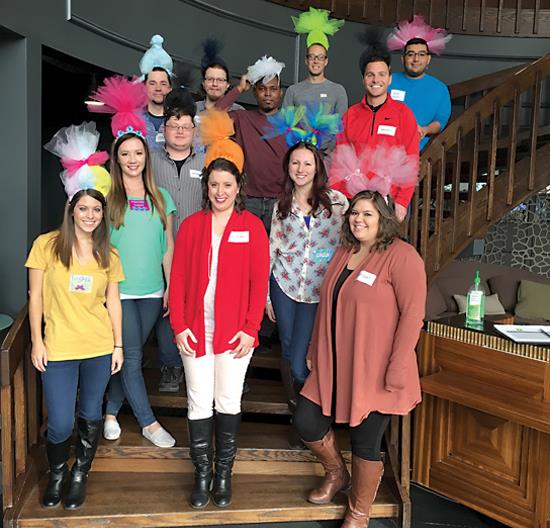 Brothers David and Leonard Zmijewski started Mr. David’s out of a van at the ages of 18 and 19, respectively, as installers trained by their uncle in the trade. The unique name that the business carries is representative of the fact that the pair had no anticipation, at the time, that they were starting a corporation that would endure for more than four decades. They were simply two young guys hoping to make a buck working with their hands.

BECOMING MR. DAVID’S
Of course, Mr. David’s turned out to be not a temporary, two-man gig but a formidable empire. Today, the business has 700 employees across nine offices, spanning from Florida to Wisconsin, and works nationwide.

Though the Zmijewski brothers installed exclusively in the residential market to start, only two years in-and with no real knowledge of the bidding process-they bid on a job for the Hyatt Regency O’Hare. They landed the job and completed it well but overlooked the fact that they should bid on additional jobs during the installation period and finished with no next steps lined up-truly a learn-as-you-go venture.

So how did that business grow into the powerhouse that it is today? Following its successful entry into the commercial world, Mr. David’s focused on hospitality market work. In the early 2000s, the business was about a tenth of the size that it is today and operated as a labor house, meaning that it did not procure materials but offered installation only. However, when the 9/11 terrorist attacks occurred, David and Leonard anticipated that the hospitality sector would experience difficulty as consumers pulled back on travel, and began looking toward expansion into other sectors. To that end, Mr. David’s began hiring a sales team to build business in the healthcare and office sectors and also transitioned to be a turn-key operation, offering materials through, what is today a substantial warehouse network and transportation via its own fleet. As of late 2017, Mr. David’s has 52 salespeople selling the full spectrum of flooring products across all the commercial sectors.

PUSHING FIFTY & GOING STRONG
Forty-five years in, David and Leonard remain active in the business and believe strongly that their success is not attributable to them exclusively but to their people. Says Leonard, “This organization was not built by the two of us but by the team.” The pair are especially proud of the fact that many employees have brought their family members into the business. “We have multiple generations at Mr. David’s,” he adds, “Many of our installers are third-generation. We are proud that our people are willing to bring their relatives in.” In addition, the Zmijewski brothers have about 15 of their own relatives working at the business, including Leonard’s son and David’s daughter.

Though they may not have had greatness in their sights early on, make no mistake that the Zmijewski brothers have a big vision today. “Long range,” says Leonard, “we want to be truly national. We have made about 15 acquisitions, and we will continue on that path. We plan to be in three new markets within the next year and add an additional ten offices by 2020.”

To achieve those big goals, the brothers are committed to putting money back into the business. “We invest everything back into Mr. David’s,” Leonard continues. “That’s why we have been able to grow as we do. We don’t think about taking money from the business for ourselves but about how we can use it to be bigger and better, to improve who we are as organization.”

In addition, the company believes that staying true to its roots continues to bring it success. “One of our core values is understanding installation, and that’s really a competitive advantage,” Leonard says. “We were basically born into the industry through labor. We have more installers on our payroll than any other firm in the country, and we take a lot of pride in that.” In fact, rather than using subs on distant jobs, the company moves its own installation team coast to coast as needed to complete work.

Mr. David’s is a Starnet member, and Leonard serves on the board of the organization, in addition to being a member of the INSTALL board. Mr. David’s is also a union partner.

THE LABOR PINCH
Mr. David’s reports that the most significant challenge it faces is finding labor-not only on the installation side but also for professional positions.

Regarding professional hires, Leonard asks, “How do you create passion for the industry so that people are excited about it? When we try to recruit out of college, the recruits can’t get past the idea that it’s flooring. It’s a generational mentality. We want people to be excited about the opportunities that we offer. We feel that we are changing an industry, but at times, we find it difficult to get people excited. Once people are on board, they are excited, but getting people to understand the opportunity and join is a challenge.”

Mr. David’s clarifies that, on the labor side, it’s not just about signing up warm bodies but about finding skilled workman. “In booming cities, the labor shortage is very bad,” says Leonard. “Take Nashville for instance. You can’t get laborers there. We have done about half of the largest jobs there over the past two years, and the labor shortage is blatant.”

Mr. David’s, which isn’t just looking for the best in the industry to hire but the best all around, notes that it offers wages not just competitive with but higher than other industries, and it still finds it hard to attract talent, which it attributes to the fact that flooring just isn’t seen as a “sexy” career by the generations entering the work force today.

SUPPORTING THE TEAM
Mr. David’s believes in supporting its team with a strong infrastructure, and over the past three years, the company has been working to build its in-house IT and infrastructure team. Just this year, it hired a vice president of IT to head up development.

The business has its eyes set on a top-notch proprietary network that includes CRM, sales and back-of-house functions. In addition, the Mr. David’s system offers a portal through which customers can log in remotely and see real-time updates on their projects. “We want to make sure we are giving our account executives that best platform to grow them,” says Leonard.

For many years, Mr. David’s relied on its vendor partners to provide education for both its account executive and installation teams, but this year it brought that function in-house with the launch of MDI Continuing Education.

With its goal of attracting top-talent, both young workers and seasoned veterans, Mr. David’s believes that ensuring success via education is an important component. Some of the seminars are conducted off-site-going to see how a product is made, perhaps-while others are in-house-showing account executives how to better use the infrastructure tools that the company offers, for instance.

For the installation side, “we have always believed in education,” says Leonard. “But, today, we have become more formal about it. We make sure our installers are certified in everything that they can be and have access to education. Those who want to succeed here know that they need to keep active in education.”

In addition, annually, the company offers its Emerald Trip to sales team members who hit a particular profit percentage each year. In 2017, that trip was a long weekend in Paris for 25 Mr. David’s employees. Other Emerald Trips have taken employees to California’s Napa Valley and Ireland.