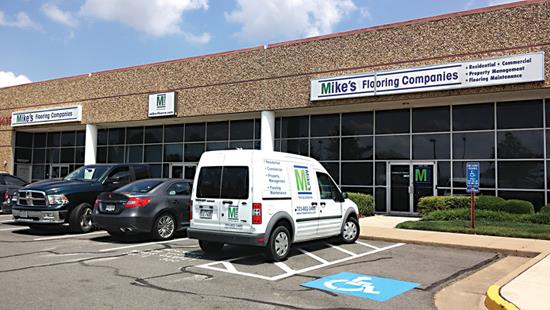 With locations that stretch from New England to south Florida, commercial contractor Mike’s Flooring Companies (MFC) has its eye set not only on adding to its physical footprint but also on expanding its business via a product not typically found among a commercial contractor’s offerings, its enterprise resource process 360Vision Software.

GROWING A BUSINESS, WHILE KEEPING A CULTURE
MFC is a privately held and family run business owned by Mike and Leslie Schreiber. While the Schreibers have built a culture that is very much what you expect to find in a family run business, their mindset toward operations is more “big business”—highly automated, built on efficiencies and focused on growth.

“This is not a lifestyle business,” says Schreiber. “We have already achieved significant growth, and we know that the bottom line has to be X to afford that growth. We rely on workflows, business software, and all our locations doing things the same way. We are firmly committed to growing geographically while staying focused on our competencies. We want to move into the markets where the largest customers are doing business. We will do it intelligently, through both acquisition and opening new offices in a measured way. We deliver great service, and we want to do it in more places.”

MFC’s acquisition of Raleigh, North Carolina-based Triangle Flooring & Surfaces in late May was a strategic buy to fill in one gap in its market. Schreiber explains that last year he and his team looked at a map and determined that MFC needed to acquire commercial contracting businesses in North Carolina, northern Maryland, Delaware and Pennsylvania. They also needed to consider adding a Boston office, so they set out to expand beyond their current reach, which, by the company’s estimation, is 64 million Americans or approximately 20% of the U.S. population.

However, Schreiber will not accept growth at the expense of culture or customer service. He believes strongly in building an environment in which the customers’ needs come first, a belief that his employees are expected to share.

In the words of CFO Bart Snell, “It’s really a great company. I’ve worked for companies like IBM, but Mike and the people he has brought in here are great. He is interested in the win-win, and he takes a long-term approach. He’s customer oriented. In Mike’s view, if something goes wrong, MFC takes the hit to make the customer happy. It’s about honesty and integrity, and, with Mike, you embrace those values or you don’t stay. It’s really a great environment for customers.”

360VISION
One of the things that made the Triangle acquisition seamless for MFC is that the two firms were using the same software, MFC’s 360Vision.

In June 2014, MFC brought in Mike Fitzgerald, who was founder and president of Advanced Flooring, to serve as director of software development. In addition, the agreement provided MFC a license to the existing intellectual property rights for the software, which was then named FloorPro, and related applications. The product was renamed 360Vision.

Why would a commercial flooring contractor have an interest in diversifying into software? In September 2013, MFC hired CFO Snell, who had a background in telecom, and Snell recognized that the software could be a business in and of itself, so MFC invested in 360Vision with the intention of competing with other industry software firms for the business of flooring contractors, property managers and builders. The company believes that within the next four years the software could add another $5 million of business.

MFC is currently in the process of creating a new version of 360Vision, which it plans to roll out in the third quarter. It’s also developing accompanying documentation, which will be available for customer use both online and by hard copy.

TRIMMING EXPENSES FOR A BETTER BOTTOM LINE
For MFC, future growth isn’t only about getting bigger, it’s also about finding places to trim. In fact, MFC has one employee who spends half his working hours looking for ways to reduce freight costs, and last year the company added a half percent to its profit margin because of freight savings alone.

“To succeed in this business, you have to be maniacally focused on profit margins,” says Schreiber. “You have to work to get the best pricing and understand what customers want. You can grow yourself out of business if you don’t look for efficiencies.”

Schreiber credits his membership in FloorExpo as another means of gaining a leg up with regard to product pricing through purchasing benefits.