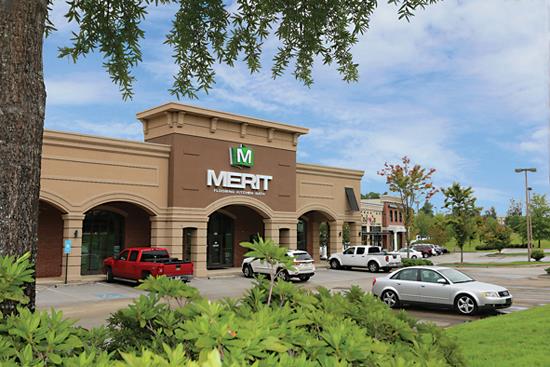 Merit Flooring is a third generation flooring business that respects its roots but is not beholden to them, strategically evolving to stay ahead of its market competition by both changing its name and diversifying its business model.

NEW NAME, NEW BRAND
Farr Furniture opened its doors in Augusta, Georgia in the mid-1950s; however, in 1957—within a few short years of its opening—the business expanded into flooring and changed its name to The Carpet Shop, and it stopped selling furniture. After more than 50 years of operation under that moniker, the leadership began to feel confined by the title of carpet specifically, and, more generally, the idea of putting product first by referencing it in the business name, so The Carpet Shop became Merit Flooring, a name that suggests quality, worth and value.

Dan Holloway, president of Merit Commercial Flooring and Merit Flooring Kitchen & Bath, says, “We were doing lots of work with out of town contractors, and ‘The Carpet Shop’ pigeonholed us. People would ask if we could do tile or hardwood. In addition, I came to realize that some of our carpet customers were buying hardwood and tile from our competitors, so we had to make a change. Carpet is such a small part of what the market demands these days. With the new name, we wanted to create a brand built around service, not just product.“

The leadership team first transitioned the commercial business over to the Merit Flooring name and then, two years later, the retail business.

SELLING SERVICE
When the leadership decided to rebrand the business to Merit Flooring, the operation had three retail stores and a commercial arm that had grown significantly. Holloway believes strongly in the value of diversification and, as a result, was looking for a way to expand the scheduled-work side of the business.

“We didn’t want to chase commodity items, so we decided to broaden our scope into kitchen and bath. We don’t sell cabinets, for example, but the whole process from design to construction. We don’t want to sell a product that you can pick up down the street for a cheaper price, but the final solution, taking a customer’s kitchen from where it is to finished product.”

Will Merit sell a customer cabinets or counters only? No. If a customer comes in asking for those items, Merit will refer them to a partner that specializes in those items. Holloway explains, “It’s rare that a customer doesn’t want the whole shebang, that they want just a cabinet. They typically need all the items that make up a kitchen. If someone comes in asking for a cabinet, we will try to compete for the whole project.”

To make the kitchen and bath operation work, the company hired a builder and two kitchen and bath designers. In addition, Holloway established partnerships with local and likeminded vendors in plumbing fixtures, shower glass and the like to serve as subcontractors to complete the jobs. Like Merit, these businesses are focused on selling service, not simply meeting a price point.

Ultimately, Holloway sees his most important job as maintaining a balance between the retail, commercial and builder arms of the business, and that has proven to be a challenge. “We don’t want any one part to dominate,” says Holloway. “Commercial has become dominant, which brings opportunities but also creates obstacles.” Currently, Merit Flooring is 50% commercial, 30% retail and 20% builder, and Merit runs different profits centers for each of the businesses. The commercial business includes military, medical, church and education work.

Holloway points out that while Merit has local competitors in all three of its businesses, rarely does it have a competitor that specializes in two of the three.

THREE UNIQUE MARKETS
Though Merit’s three retail locations are all within about 30 miles of one another, they cater to distinctly different markets.

Aiken is an upscale retirement community, so customers in that location are typically between the ages of 55 and 70, both male and female. At the Evans location, the company typically sees working couples with two kids, a dog and an upper middle class income. Holloway reports that customers in the Evans store are more price-conscious than in the Aiken store. The Augusta store caters to a broad range of clientele, as there is a significant disparity between the classes within the city.

Merit participates in Facebook and Houzz, and has a newly redesigned website that highlights each of its three businesses.

THE LABOR CHALLENGE
As we so often hear when speaking to retailers, one of the greatest challenges facing Merit Flooring is finding good labor. On a daily basis, Merit typically has 20 teams in the field, which amounts to between 50 and 60 laborers.

Interestingly, while some of Holloway’s peers feel that finding trained and qualified laborers is the challenge, Holloway reports that he isn’t even seeking that level of experience. Holloway simply wants individuals who are eager to work, believing that he has a team in place that can train any willing person to correctly install product.

“Technical training isn’t the problem,” says Holloway. “We need a willing workforce. We can train anyone who is willing to work hard. And, in spite of what many people believe, laborers can make a very good living. There are some pretty highly paid positions in the field. Labor guys can certainly make money.”

Interestingly, the industry organizations that are currently seeking a solution to the labor dilemma typically focus on training, rather than simple recruitment.

THE CHANGING BUSINESS OF AREA RUGS
Merit sells a full range of residential and commercial flooring products but is currently in the process of changing its area rug business from standard, off-the-rack, to a custom rug program, which he will get from companies like Masland, Karastan and Stanton.

According to Holloway, with only 30% of Merit’s business coming from residential retail, he simply can’t justify maintaing a large area rug inventory, especially now that Merit’s focus is more diversified and the kitchen and bath service element is a greater percentage of the revenue mix. Last year, area rugs only accounted for about 1% of Merit’s total business, partly because the rug price points have shifted and his inventory doesn’t match what’s selling today—with prices too high for some customers and too low for others.