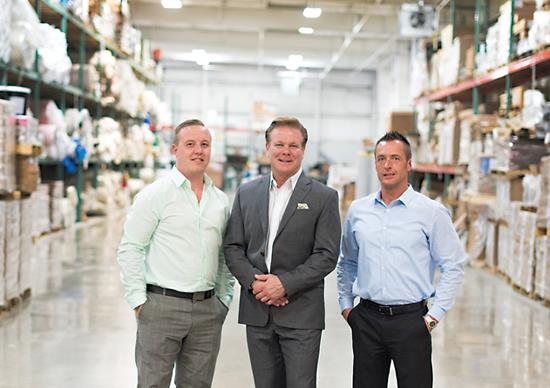 Dan Ulfig, president and CEO of Master Craft Floors, is a character. He has a gigantic personality, lots of opinions and the guts to make big things happen. In 2012, Master Craft’s annual revenue was $15 million. Inspired by the achievements of his fellow Starnet members, Ulfig set the goal of hitting the $30 million mark—doubling his business—by 2018. Colleagues said it couldn’t be done, but the company closed last year at $28 million, three years shy of his goal. Still, that’s not good enough for Ulfig. “My goal was $30 million, and, by God, I’m going to get there.”

CRAFTING CULTURE
Though he has his mind set on that $30 million mark, Ulfig doesn’t let the numbers rule at Master Craft. Culture is just as important to him, if not more so. “I feel that work should be a fun place. If it’s not fun, why do it? I give people a long leash, believing that you’ll get way more out of trusting and empowering people than you will by micromanaging them.”

To that end, all of Ulfig’s installers are employees. He hires the best he can find, and he makes sure they are well trained in all capacities. Very important to him is the idea that his installers are “interchangeable parts,” as he calls them. One benefit to this philosophy is that in instances where the flooring installation time is cut short, as it often is, Ulfig can flush a job with 30 employee installers and complete it quickly, meeting the deadline and thereby pleasing the contractor.

In addition, Ulfig offers his customers background-checked, drug-tested, safety-trained and insured installer employees, which adds value to installation. And, like many commercial contractors in the East, West and Midwest, Master Craft is a signatory to the Carpenters Union. “I can tell you that the Carpenters Union has done nothing but help our business,” he says. “Our craftsmen are skilled in flash coving, heat welding and are constantly receiving the latest upgrades in technical training.”

HITCHING HIS WAGON TO A STAR
Master Craft joined Starnet in 2007 and Ulfig credits the organization with not only opening his eyes to what his business could be, but also helping him get there. “Meeting and learning from the brightest and most successful minds in our industry has been invaluable,” explains Ulfig. “Starnet has turned our company from an also-ran to a dominant player in the floorcovering industry. We have patterned ourselves after other successful Starnet members to our great benefit.”

Ulfig participates in Starnet seminars, training and networking events, and he currently sits on the Starnet board of directors.

At one of Starnet’s Next Generation breakfast events, where seasoned members routinely offer advice to newer members, Ulfig delivered an address for which he is often known in the industry. To represent his Detroit roots, he offered his words of wisdom while wearing a crushed velvet “pimp” suit with leopard trim, leopard-print hat and shoes and gold chains, interspersing his comments with some of Motown’s greatest hits.

CULTIVATING PARTNERSHIPS
As an approach to business, Ulfig has adopted the slogan, “Do it, delegate it or dump it.” That thinking applies to customers as well.

“Today we stick to that proven recipe of stellar labor and solid credit,” he says. “We don’t take ourselves too seriously and we stay true to our blue collar, hard working roots. We seek win-win relationships and avoid the poisonous ‘I must win and you must lose’ relationship. I do not want customers who are adversarial. We operate on trust and earn it. I try to earn trust by putting myself at a deliberate disadvantage. They will understand a win-win at that juncture.”

Standing behind their work also engenders trust. Master Craft offers a five-year labor warranty to its regular annuity customers. In addition, because Master Craft is an Installation Standards and Training Alliance (INSTALL) warranty contractor and all its installers are INSTALL certified, INSTALL provides a two-year warranty on its labor.

Ulfig works hard to promote goodwill between the parties in the building and construction industry. He often speaks at lunch-and-learn seminars to architects and designers, and his advice to them is to find a good contractor and trust him. “This contractor will value you and jump through hoops, doing whatever is needed to make you happy,” Ulfig adds. “You will be important to him. He won’t be the lowest price, but he will have a fair price. You won’t be nickel-and-dimed to death for minor prep, small repairs or other problems you face. Your facility will look like it was done by someone who cares.”

THE EARLY YEARS
Master Craft was founded by Ulfig’s father, Eugene Ulfig, and his partner James Beauchakian, known as Bo Jack, in 1974. Eugene and his partner were union installers at a firm that went belly up, so out of necessity they decided to strike out on their own. The business—then called Master Craft Carpet Service—was an installation house that did labor-only work for various design firms and dealers.

Dan Ulfig graduated from Eastern Michigan University in 1975 with a degree in business administration. At the time, the cover of Time magazine had a picture of a guy in a cap and gown pumping gas, with the headline, “Who needs college?”

“My father asked if I wanted to work with him. I asked if I had to get my long hair cut. He said, ‘No,’ so I said, ‘I’m in!’” Ulfig started as a union floor decorator apprentice, then graduated from apprentice school and worked as a union flooring mechanic for ten years. Says Ulfig, “The General Motors complex was our biggest labor-only account in the ’70s. At four million square feet, there was nonstop renovation. They were renovating a wing a weekend!”

Soon after, a multi-line manufacturer’s rep recruited Ulfig to call on architects and designers, an experience he characterizes as eye opening. “I saw an overview of my whole market,” he explains. “I saw where all the business was, where it could be, and how others were doing business. We kept saying [at Master Craft] that we needed to start selling material but had never done it.

Around the same time, his father called him in a panic. He had a lot of work and needed his son to be foreman on a new Electronic Data Systems facility that was being built. Ulfig adds, “I said, ‘Okay, but as soon as that building is completed, I am not laying floors anymore.’ He was flabbergasted! ‘Not laying floors! How the hell are you going to make any money?’ I said, ‘Just watch.’ That was the beginning of Master Craft as a full service dealer. I stepped in and started selling jobs. Soon, I hired our first outside salesperson, Mike B., who still works with us today.”

Dan Ulfig bought Master Craft from his father in 1994. Until the day he died, Eugene Ulfig had an office at Master Craft and received a paycheck.

DIVERSE REVENUE STREAMS
Entry into the casino business is difficult because it requires extensive background checks of the contractor as well as its leadership. Master Craft had success getting into and working within the Michigan casino business, and when the downturn hit Detroit, early in the recession, Ulfig decided to take that experience to Las Vegas.

Of course, Las Vegas would also come to be hit hard in the recession, but the firm managed to pull through stronger than ever. Ulfig adds, “We have earned our keep out there. I had to go through 150 guys to find a handful of good installers. In fact, I was sending people from Michigan out there. The thing that really separates us in that market is our labor.”

Today, Ulfig’s son Garrett Mackey runs the Las Vegas arm of Master Craft, which accounts for about 20% of its total business.

What’s more, in addition to offering floorcoverings, Ulfig has also invested in the equipment needed to polish and maintain concrete. Master Craft maintains marble and terrazzo as well.

BUILDING SOMETHING TO ENDURE
Rick’s three sons are now in the family business, making them the fourth generation of the family to work at Myers—Rick and Ray’s grandfather also worked for the business that his son started. Justman manages the Nashville warehoid for, so we didn’t owe the banks a lot of money. Today, our Nashville building is paid off, too. We have found our brand, and we are sticking with what we know. Last year was the best year we’ve ever had, and with the acquisition, I don’t see why 2016 won’t be even better.”

FLYING HIGH
Ulfig’s commitment to delegating tasks and trusting employees affords him the time to have a life outside of the office. In fact, at age 53, he was the number two freestyle snowboarder in the USA Snowboard Association’s 50 to 59 division.