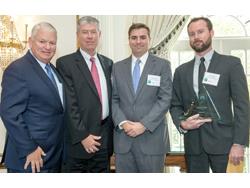 Campbell addressed the audience after Mannington was named winner. "My great grandfather started Mannington 100 years ago as a way to stay close with his two sons.  It was truly a family business. Here we are in our fourth generation, moving into the fifth, and we're still a true family business.  It's an honor to be recognized and I know they would be proud of what Mannington has become."