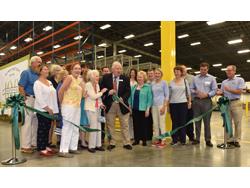 This finishing facility is adjacent to LVT manufacturing facility, which was built by Amtico in 1998 but has been expanded twice by Mannington in the last two years. LVT slabs are converted at this facility into either running line products or custom orders depending on the need. This operation also adds the click profile for those products that are sold to be installed as a floating floor.

In a gesture to further accentuate its commitment to the region, Keith Campbell donated a $75,000 check to a new Zoo and Safari Park that is in the early stages of construction and a $50,000 check to the county hospital to go toward a new emergency room.

In Campbell’s comments to the crowd, he pointed out that these new jobs to produce LVT used to be outsourced to China.

Russell Grizzle, CEO of Mannington Mills, also spoke at the event, noting that the company’s “… lvt investment in Madison, Georgia is the single largest organic project in the history of Mannington.”

As stated in the February issue of Floor Focus magazine, LVT sales grew 11.1% to $849 million in 2015 making it the fastest growing category in the flooring business. Mannington, which is celebrating its centennial anniversary this year, is the market share leader in the commercial sector of the LVT business.