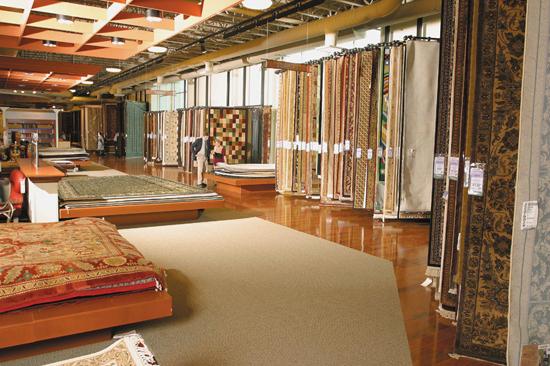 Floorcovering retailers who don’t sell area rugs are overlooking what can be a high-margin profit center, with zero installation headaches, plus rugs offer an incremental sale to most hard surface projects. However, to be successful, it’s not something that can be taken lightly, with a few rugs on display back in a corner of the store. Selling rugs successfully requires creativity, an eye for design, and a passion for the business, along with a dynamic merchandising plan. But there’s no one way to success.

Emphasis on Rugs Inc. of Evansville, Indiana is owned by Mike Kishline and David Lewis, and they are the firm’s only employees, so it makes for some long days. Last year they did close to $1 million in business, selling only machine woven, hand-tufted and hooked rugs from Shaw, Nourison, and Oriental Weavers, among others.

Lewis’ father runs a high-end rug business—selling rugs $3,000 and up—in another location in the area. Lewis worked for his father for 25 years before going out on his own. He also studied the art of weaving rugs, and he does rug restoration himself, which he believes gives him a leg up on his competitors. He offers some custom rug services. “The rug business as a whole is behind the times compared to most businesses,” Lewis says. “We are very old fashioned here.”

Emphasis on Rugs’ clients are generally women age 30 to 60, many of them first-time rug buyers. The store focuses heavily on customer service. Lewis will drive up to a hundred miles after store hours to deliver a rug, free of charge, and even move a customer’s furniture, something people often wonder how he can afford to do. But more often than not, that service results in more sales because he has such a good eye for design and can make suggestions on the spot that the customer will like.

“Get me in your home and I’ll sell more than the rug I’m delivering,” Lewis says. “It has worked fabulously.”

The company has 30-day sales events in April and October and advertises heavily around them beginning a week before, mostly on television, both cable and network. Lewis estimates he has about 400 television spots during the month. These events often feature 20% discounts across the board. They also do some advertising in a local lifestyle magazine.

That isn’t the only way the business gets the name out. Lewis and Kishline will hand deliver 5,000 flyers in neighborhoods where homes are valued from $90,000 to $350,000. “If we go to someone to mail the brochures, they’ll just blanket the area and a lot will be wasted,” Lewis says. Plus, they get to “kiss babies and shake hands” while out in the community.

The physical store is different from most as well. The 10,500 square foot showroom was added on to the back of a house, so customers first walk through the house. The showroom has always been well stocked with 8’x10’ rugs since their grand opening sale three years ago. Another touch is that the showroom contains nothing but incandescent lights, rather than fluorescent, so the rugs will look more like they’ll look in a customer’s home. The standard bulbs add substantially to the company’s electric bill, but Lewis says it’s well worth the expense.

About three quarters of the company’s business is in traditional rugs, in mid grade jewel tones, with typical Persian designs. Much of the remaining business is in shag rugs and hooked rugs. Roughly 15% of the business is commercial, with clients like the University of Evansville and area banks and churches. Kishline works on commercial floor plans with designers.

Rug sales make up about 10% of flooring sales for Roberts Carpet and Fine Floors of Houston, Texas. The firm has eight locations (a ninth is under construction) but only three of the stores have rugs, with showroom sizes ranging from about 4,000 square feet to 11,500 feet. It specializes in upper end rugs, although it sells machine made rugs but doesn’t display many of them. However, the firm has rugs at all price points, from polypropylene to hand-knotted Persians.

“The dollar volume contribution is so poor with machine made rugs,” says owner Sam Roberts. “Rugs is one of those things, because there’s no installation, that you find yourself competing with someone operating out of his home office with a good website.” This, he believes, is especially true with less expensive rugs.

Roberts has seen many cases in which a customer will take a rug home from the store, decide she likes it, and then find a better online price and return it. “It’s just one of those unfair things that you have to deal with.”

Partly for that reason, Roberts also specializes in rugs with very limited distribution, even one-of-a-kind rugs. To sell a high-end hand knotted rug, he says, requires developing a relationship with the customer, who usually wants to see and feel the product. And that falls to his wife, who runs the rug department and decides exactly what to order.

High-end rugs also fit better with the rest of the flooring the store sells, along with items like granite countertops. They also beautify the store, Roberts says, which helps create an impression of quality, and they can help make a sale for hard surface flooring or even an intricate countertop.

A key to selling rugs, Roberts says, is for a salesperson to view them as art, rather than as floorcovering. And like any art seller, they have to know as much as possible about rugs, from construction to history. “That changes their perspective totally and they become more enthusiastic. If they see it as just another piece of carpeting or something, it doesn’t have that effect at all.” Roberts says it’s been his experience that women do a better job than men at selling rugs because they are generally more patient, design oriented and sensitive to color.

“The area rug business might not be for everybody,” Valerie Roberts says. “It takes a lot of time to sort them out and merchandise them properly.” She says rugs are a very fashion forward business and it’s important to keep up with new products and trends, and have the current styles and colors. She keeps an eye on trends in clothing and furniture because rugs often follow.

It’s also important for the salesperson to be able to envision the space in the customer’s home. She encourages customers to bring in fabric samples, pictures, and anything else that can help her create the vision. Customers can take rugs home and try them out, or the store will deliver them since they can be bulky and not easy to transport.

It is the largest floorcovering retailer in the area and has become known as a resource, including for area designers. The stores have periodic rug sales events but Valerie Roberts says she tries not to repeat events very often.

“What happens is that when one store has a certain type of sale, then everyone starts doing them, like private sales, so we like to keep things extremely varied.”

Nebraska Furniture Mart of Omaha, Nebraska, which specializes in floorcovering, furniture, appliances, and electronics, sold 46,000 rugs of all sizes last year, with the most popular sizes being 5’x8’ and 6’x9’. About half of the rugs the stores sell come out of inventory.

“Generally the customer we see wants to change the look and feel of a room without a complete remodel,” says Gary Cissell, the company’s director of flooring.

Cissell adds, “As the recession goes on, and people aren’t traveling, they’re investing in their homes and rugs are a simple and economical way to look and feel different.”

The firm has a very structured process for hiring rug salepeople, with a specific set of questions to find the right people. “They have to have a passion for selling and an eye for color,” Cissell says. Nebraska Furniture Mart is highly event driven, and Cissell tries to think of unusual ways to get rug buyers into the store. One of his most successful promotions was a post Thanksgiving day event  in which he offered 2’x3’ rugs for $1. They sold about 4,000 of those rugs in a few hours. However, Cissell had the rugs placed in such a way that shoppers had to walk by beautiful 5’x8’ rugs, then 6’x9’ rugs, all at good prices.

“We sold every five by eight and six by nine rug we had,” Cissell says. Another time he brought in a $250,000 Persian rug to display, which brought a lot of people into the store.

A key, Cissell says, is his stores are always changing out merchandise on display, so frequent visitors will always see something different. That applies to every department in the store. His rug showroom in Kansas City is about 9,000 square feet, and the display area in Omaha is about 5,000 feet.

“I think a retailer could probably show a lot of rugs in a small area but I don’t think we could do the volume we do with anything less,” Cissell says. “I think a lot of retailers are missing the boat.”

He prefers to hang large rugs on a single arm because customers can see them better and relate to them better. “When we did that, it dramatically increased total dollars,” Cissell says.

He also has platforms of solid oak, featuring hardwood flooring the store also sells, to lay the rugs on.

Rug margins, Cissell says, are better than other flooring categories, and there are fewer problems. Customers are generally satisfied, rugs are fairly easy to handle, and there’s no installation. “Installation keeps me awake at night,” he says.

Other modern touches include a custom area rug kiosk to help customers design the perfect rug on a computer and print out the design on a laser printer. Cissell has other areas devoted to scatter rugs and has started focusing on custom runners, which he believes will do very well.