Made in America: Mannington LVT in Madison, Georgia 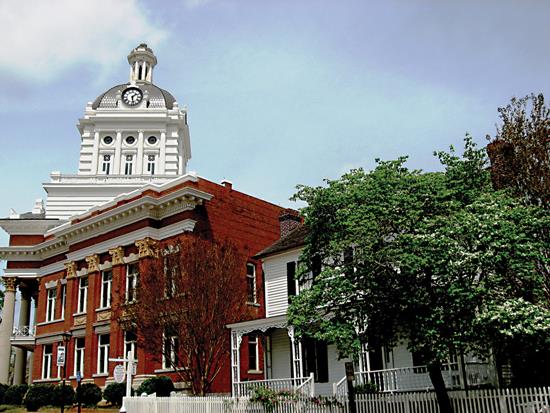 Madison, Georgia is about an hour’s drive due east of Atlanta, a few miles off of Interstate 20. When you drive into Madison, the county seat for Morgan County, you find yourself in a quaint little Southern town. The streets, shaded by mature hardwood trees and lined with well-maintained, ornate antebellum homes, converge at a towering courthouse in the center of town.

The waitresses at the timeless downtown diner are quick to tell the story about why General William T. Sherman spared this little town in his infamous and brutal march to the sea. The first and younger waitress, told us that it was rumored that Sherman had a girlfriend in Madison. But when we inquired for further details from a more seasoned waitress she told us the real story—Madison was spared because it was home to a pro-Union U.S. senator named Joshua Hill.

I relay this story to help you understand the roots of this small American town that will continue to thrive as a result of the investments that Mannington is making as it quadruples the output of its Madison LVT plant—which at this point is the largest LVT plant in the U.S., not to mention one of the largest employers in Madison.

Located on Amtico Road in Madison, the plant was first opened by Amtico in 1998. When Mannington acquired Amtico’s global business in March 2012, the company decided to invest heavily in the Madison location with the goal of shifting all of its LVT production (for products sold in North America) to the facility. Now, after committing $50 million in additional investment, the LVT manufacturing facility will soon have twice the footprint and employ over 200 more people than it did when Mannington acquired it two years ago.

It’s important to note that, prior to this investment, the Madison facility was already the largest domestic factory for LVT and one of the contributing factors in Mannington’s market leadership. Today, Mannington is the marketshare leader in the commercial LVT business, commanding an estimated 42% of the U.S. market. Not only does this facility give Mannington’s product marketplace preference with its “Made in the USA” label, but it also offers additional benefits, including shorter lead times and superior product quality based on a highly engineered manufacturing process.

The majority of the LVT flooring sold in the U.S. today is sourced out of Asia. These foreign-made products not only have a 16-week lead time but they are produced using a labor intensive batch-pressing method that would be cost prohibitive here in the U.S. Mannington, on the other hand, uses a continuous rotocure process that feeds up to six layers into a roller press, resulting in faster, less labor-intensive production. As a result, Mannington’s LVT is available to ship faster and is cost competitive.

To enhance the quality, durability and aesthetics, Mannington sources the multiple layers used to assemble its products from the global experts that have refined the various components of the finished product. The Skeleton print film, for example, is sourced out of Japan. Other layers contribute to the product’s color, durability and texture.

While all of the enhancements to this plant are not scheduled for completion until early next year, Mannington is already able to offer an unprecedented five-day shipping guarantee on its top 100 commercial products. It also offers the only American made embossed-in-register texture and click installation system available on the market today. In addition, 80% of Mannington’s commercial products are now made in the USA.

Mannington, a privately owned flooring company headquartered in Salem, New Jersey, will be celebrating its 100th anniversary next year. The firm has built its reputation over the years by offering fashion-forward aesthetics in the widest range of floorcoverings in the market—the firm manufactures carpet, LVT, sheet vinyl, VCT, rubber, hardwood and laminate. In the last few years, many of the leading flooring firms are following Mannington’s lead by diversifying their mix into both hard and soft surface categories, though none can challenge the firm’s LVT position, nor, currently, its focus on products made in America.