Looking Back: From trunks of cars to color walls—How flooring displays have evolved - March 2021

The ways in which flooring has been displayed have evolved drastically over the years. In the 1950s, carpet mills would cut corners off of carpet and either staple or tape a label on them. Salespeople would gather a bunch of those samples, throw them in the trunk of their cars and head out to sell. The trouble was that the labels fell off easily and the salespeople wouldn’t know which color was which, says Stuart Nelson, chief administrative officer of Brown Industries, a Dalton, Georgia-based maker of manufacturer displays. Brown Industries, which was then known as Brown Printing, helped develop an iron-on label that could be affixed to the backs of carpet samples. (They are still used today.) 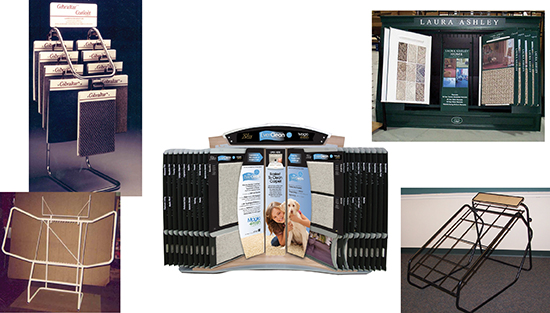 “Next, the salespeople say, ‘Hey, we need a way to carry these things easier and take them in show people,’” says Nelson. So the next invention was the binder. It had a cap with a handle and could hold a handful of samples, and that salesperson could now go out in the field and drop one down and say, “Here, go through this.”

In carpet stores, though, there were now samples laying all around. That’s when someone had the idea of creating a device that could hold them, and the waterfall rack was born. “You could look at it at a glance and you could sort of see the color line,” Nelson says. “But it was limited as to how many you could stack on one of those things.” Despite the limitations, it remained a popular display through the ’80s.

In the late ’80s, early ’90s, a new type of binder was created that established a board upon which small samples could be affixed, allowing for an entire color line to be displayed. To help organize and display them, the binder rack was created, featuring hooks from which those binders could hang.

Next up in the evolution was the flip card. The idea was to take a binder and put it on one card, which had a feeler swatch on one side and a complete color line on the reverse. They were larger cards and could hold more colors. To display them, the rack card display was created, and customers could flip through the cards.

Toward the end of the ’90s, with the growing awareness that the target consumer was female, Brown began transitioning displays from metal to wood, which looked more like a piece of furniture and seemed more inviting and accessible. As part of the effort, manufacturers enlisted the help of designer names like Laura Ashley and Waverly, which were added to their displays to appeal to the female shopper.

Today, while rack cards are still being used, colorwalls and hybrid displays are gaining momentum. They incorporate traits from their predecessors: the middle may be a wall that displays the complete color line and small samples, and on the sides there may be larger feeler samples, much like a waterfall, so you can pick up and feel the texture and quality. Ultimately, Nelson says, “It makes shopping quicker and easier.”