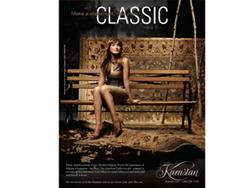 , June 11, 2007--Mariska Hargitay, the Emmy Award-winning actress of NBC-V’s smash drama series “Law & Order: Special Victims Unit,” is the star of Karastan’s 2007 “Make a Statement” national ad campaign. Hargitay, who has played detective Olivia Benson for eight seasons on the acclaimed series, is the latest in a line of distinctive personalities featured in print advertisements for the luxury brand.

In this fourth iteration of Karastan’s statement-makers series, Hargitay follows in the footsteps of “Lost” star Evangeline Lilly, actress/model Andie MacDowell and Bliss Spa founder Marcia Kilgore. he qualities embodied by Hargitay mirror those that have helped Karastan to become the leading manufacturer of exquisitely designed, top-quality carpets and rugs.

“Mariska Hargitay’s singularly charismatic persona, innate sense of glamour, authenticity and humanitarianism are traits which Karastan and millions of her fans admire,” said David Duncan, Karastan’s vice president of marketing. “Her ability to be unapologetically true to herself and her own sense of style are very much in sync with the defining characteristics of the Karastan consumer.

“We’re also excited she’s onboard,” he continued, “because her broad appeal and high recognition factor, especially among young American women, will help attract a new generation of consumers to the Karastan brand, boosting sales opportunities for our valued retail partners.”

An in-depth interview with Hargitay, posted on Karastan’s Web site, reveals her love of home design, and her belief in the importance of trusting your instincts when creating a unique, beautiful décor. It also peels away the public perception of Hargitay as the single New York City detective to find a committed mother, wife and social activist who, in addition to lending her time and name to many important causes, has founded her own charity, he Joyful Heart Foundation.

“Millions of women across the country truly connect with Mariska’s realness and self-assured nature, much the way Karastan consumers feel a genuine emotional bond with our brand,” said . “We couldn’t have asked for an ambassador who better exemplifies what it means to ‘make a statement,’ both at home and in life.”

A full interview with Hargitay, along with a behind-the-scenes video of the making of Karastan’s 2007 ad campaign, is posted on Karastan’s Web site, www.karastan.com.