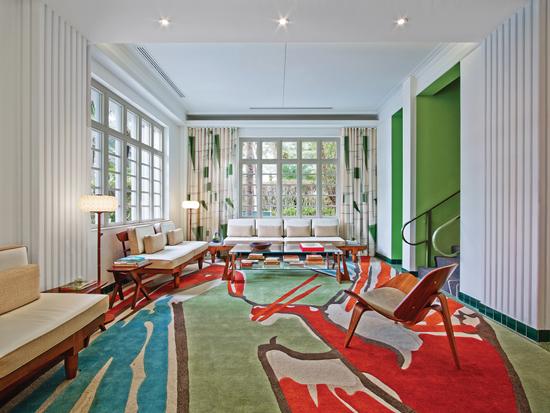 It is evident the moment you walk through the front doors that The James Royal Palm is unlike any other hotel in Miami Beach. The hotel had long been neglected and abandoned after it had served as barracks and officer’s quarters during World War II, and it was doomed for demolition. However, thanks to the Miami Design Preservation League, The Royal Palm (as it was formerly known) was deemed a contributing representative of the Miami South Beach Art Deco Style, taking its place amongst the rest of the Historic Art Deco District—and this provided the opportunity for its rebirth.

Maintaining the history of The Royal Palm, originally built in 1939, was a crucial aspect of the design aesthetic for what was to become The James Royal Palm. South Beach has a rich, eclectic history, both culturally and architecturally, so staying true to the original art deco style while incorporating modern elements was imperative.

The renovation was led by Lauren Rottet and the Rottet Studio design team. The entire design vision behind the hotel was to lure potential guests into the property from Collins Avenue and transport them into an era of nostalgia reminiscent of Art Deco Miami in the 1920s through the 1940s. In order to accomplish this goal, the layout was of huge importance to the renovation, and the flooring played a critical role from the beginning.

Flooring is a crucial factor in how well a space performs for its intended use, and Rottet Studio knew there would be a considerable amount of foot traffic tracking in elements of both the beach and streets throughout the ground floor lobby, so they needed a hard, durable floor that could be easily cleaned without inhibiting the design intent. Considering these demands and the fact that local historical governing authorities would not permit removal of the original terrazzo flooring in the entry lobby, which included a decorative compass rose, the design team decided to expand the terrazzo from the entry throughout the rest of the ground floor, and it worked magnificently. Not only is terrazzo very durable, but it also reflects light beautifully, allows room for an abundance of creative expression, and is indicative of the art deco theme Rottet Studio intended to preserve.

Strolling down Collins Avenue, wayfarers are greeted by a large, open “moon gate”—a circular wall of shrubbery that frames the front entrance of the hotel. This provides an air of privacy for patrons relaxing in the living room garden, which features oversized topiary lawn furniture including chairs, sofas and lounges. Exploring beyond this initial attraction and opening the front doors to the airy, welcoming lobby, guests are greeted with an abundance of natural light. The bright green color and forms cast by the towering bamboo just outside the window are superimposed onto a custom sisal rug to the left, which rests beneath a glass coffee table supporting old cigar boxes. The calming natural green tone is carried throughout the lobby floor, as if bringing the outside indoors, and extends approximately 72’ down the lobby corridor. Large floor-to-ceiling carved copper doors and wood paneled walls help promote the wild, jungle-like theme of this area; however, exploring further down the corridor, the floor colors transform from jungle green to ocean blue as guests make their way closer to the beach.

The inspiration behind the use of colors and textures comes from many sources, but Rottet Studio likes the spaces it designs to reflect their natural environment. At The James Royal Palm, the design team used the line of sight from the front door to the sea to take the guest on a journey, inviting them to explore what lies ahead. Rottet Studio thinks very comprehensively about its designs and considers how the flooring ties into the overall design of the walls and ceiling. Even a small accent line on the floor can be powerfully moving and can create or ruin the space. The James Royal Palm is the perfect example of this. Down the long lobby corridor that houses the James Club, bar and media center, a custom-designed terrazzo flooring with jagged path lines guides guests to their destinations and supports the playful environment of this area of the hotel. Passing through this lively portal to the grand sweeping staircase and closer to the ocean, the lines on the terrazzo become calmer and, through the use of shapes and colors, are intended to represent the serenity of the ocean tide.

To think creatively as a designer is to think outside the box, to think unconventionally and use materials in ways that might be considered unorthodox and challenge the boundaries of conventional thought. The James Royal Palm is certainly no traditional hotel, which is why the design team did not limit the use of “flooring” to the floor, but chose to extend it up the wall and even across furniture. In the banquet meeting space the team commissioned Liora Manné to superimpose a painting by Daniel McFarlane on a sisal rug that was then installed on the floor beneath the lounge area, continued vertically up the wall and mirrored onto the furniture. The result was very powerful.

Carpeted guestroom corridors follow the same theme of lines guiding guests to their destination, weaving in and out of one another down the length of the hall. Choosing whether to specify a hard or soft material for a certain area depends on the traffic volume, acoustics and durability of the product. Corridors are tricky because they are obviously high-traffic areas, but selecting too hard of a product would create lots of noise and would not absorb sound well, which would disturb sleeping guests. Therefore, Rottet Studio specified a very durable carpet that could withstand the foot traffic and absorb excess noise. The rooms themselves, however, were specified with large white tile to help reflect light and allow for easy housekeeping to keep the living areas free of outside elements.

Flooring is a major component of any design space and should be thought of in the most comprehensive manner possible, taking into consideration all the natural and artificial surroundings, as it is the first thing the eye is drawn to when entering a space. There are also unique performance characteristics related to flooring that must be factored into the design, such as slip resistance, earthquakes, the type of soil and control joints, moisture in the air and overall durability of the material. Staying educated on recent trends and bearing all these elements in mind will ultimately result in a beautiful, long-lasting design and a happy client.