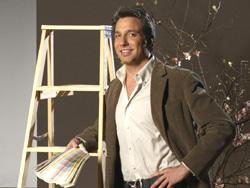 Dalton, GA, March 20 2007--Karastan is taking its “Decorating From the Floor Up” in-store consumer event and putting it on the road--and on a much larger stage and grander scale--with help from a new ally, interior designer and V personality hom Filicia.

According to David Duncan, vice president of marketing for the brand, Karastan has signed on Filicia and is creating an added component for its DFFU program, which brings decorating experts to participating retailers to conduct interactive seminars focusing on flooring solutions.

“We are enormously enthusiastic to team with hom Filicia and add a whole new dimension to Decorating From he Floor Up,” said . “hom’s boundless talent as an interior designer plus his magnetic personality make him irresistibly appealing to a broad range of consumers. Our plan is to amplify the concept of DFFU and continue to offer our retailers and their clientele a service that no other floor covering manufacturer can match. he addition of hom, who not only is a popular celebrity but also a successful practicing interior designer, allows us to ratchet up the program on several fronts.”

he initial plan calls for visits in 2007 to several major markets, such as and . Rather than appearing in-store, however, Filicia will headline events staged in local venues where several hundred consumers can attend and benefit from his savvy decorating advice. A Karastan gallery will be incorporated, as will an incentive to drive consumers into an authorized brand retailer following the event. A significant advertising campaign, including a mix of newspaper, spot V and radio, and even regional buys of national magazines, will support this venture. And, to give it even greater traction, there are plans to offer a personal “meet-and-greet” with Filicia to individuals who make a contribution of $100 or more to Susan G. Komen for the Cure. he charity, which funds education and research for breast cancer, has a longstanding partnership with Mohawk Industries, Karastan’s parent company.

Even before he came into the public eye on V’s Emmy-award winning ‘Queer Eye for the Straight Guy,” hom Filicia was an emerging superstar of interior design with a prolific and respected practice. One of House Beautiful ‘s op 100 Designers” and House & Garden’s “op 50 astemakers for 2006,” he uniquely blends the worlds of mass media and high-end interior design to create an overwhelmingly indelible impression. Among his most recent projects are the Long Island home for Lopez and Marc Anthony, which was profiled in the debut issue of Vogue Living, and the upcoming design of the W Hotel in the chic Buckhead area of . With his fresh vision of classic simplicity, Filicia is the perfect ambassador for the Karastan brand.

“I feel very privileged to be associated with Karastan, an American luxury brand leader and tops in design when it comes to rugs and carpets,” said Filicia. “I’m especially excited to be able to travel across the country on its behalf and personally meet with consumers to help solve their decorating dilemmas and offer flooring solutions. We’re going to pack a combination of education and entertainment into this special edition of Decorating From the Floor Up so that it’s a truly valuable and memorable experience.”