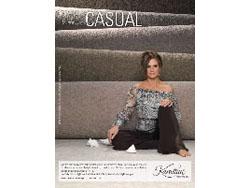 Atlanta, GA, February 25, 2008—Actress Kelly Preston, who has appeared in a range of films including the critically acclaimed “Jerry Maguire,” “Citizen Ruth” and “For the Love of the Game,” will star in the 2008 “Make a Statement” national ad campaign for Karastan carpets and rugs.

Preston is the latest in a line of personalities to appear in print advertising for Karastan. Six versions of the ad—four for rug and two for carpet—will begin to run in April issues of shelter and lifestyle publications.

“Kelly Preston’s passion for work and family, and her desire to be the best, are qualities that are central to Karastan’s core values,” said David Duncan, vice president of residential marketing. “Her distinctive, singular style, devotion to both her family and career, and lifelong love of design reflect the key traits of the Karastan consumer.”

Visitors to Karastan’s website can view a clip of Preston as she poses for Karastan and get a closer look at the 2008 “Make A Statement” ads.