Karastan Celebrates 90 Years: Innovation has guided this celebrated mill since 1929 - May 2018 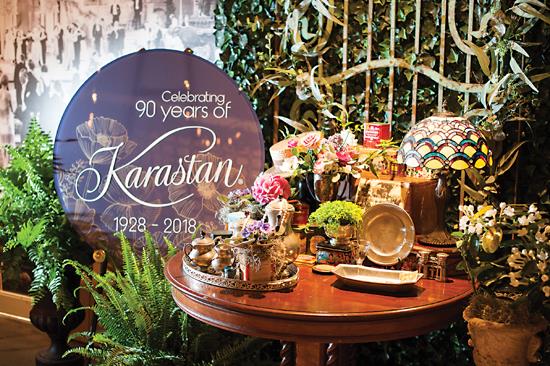 The colorful history of the Karastan brand has spanned 90 years. Its success is a testament to the fact that Karastan established and nurtured a strong brand presence in the market, seeking quality partners rather than an excess of mediocre retailers. To this end, the company long allowed only one retailer in a given area to sell its products and dictated that this retailer must devote at least 700 square feet of showroom space to Karastan exclusively. As a result of those efforts and its innovative approach to area rug production and styling, the company now faces its tenth decade, positioned for even greater success.

1920s: Marshall Field, founder of Chicago-based Marshall Field & Company department store, was struggling to find strong sheet, towel and area rug suppliers for his store. In particular, he saw a market need for a machine-made Oriental rugs at a cost affordable for the masses. Field determined to become his own supplier, constructing a plant in Virginia for sheets and towels and another in Eden, North Carolina to manufacture area rugs. For the rug plant, Field purchased Axminster equipment from England and had it modified to his needs in making woven wool rugs. Amazingly, the machinery is still in use today.

On April 8, 1928, the first Karastan area rug was produced. As production continued, the area rugs produced mimicked the detail, color and luster of imported handmade rugs, providing a high-end look at a price point that middle class Americans could afford.

1930s: In a brilliant promotional move, Field displayed his new area rug line at the 1934 World’s Fair in Chicago. The theme of the fair was technological innovation with the motto, “Science Finds, Industry Applies, Man Adapts.” This tone created the perfect backdrop for highlighting Karastan’s innovative features. A Karastan display sample rug-known as the “Wonder Rug”-was placed on the floor at the Fair and, subsequently, walked on by more than five million people during the course of the event. At the conclusion of the Fair, one half of the rug was cleaned to demonstrate the indestructability, lasting beauty and cleanability of Karastan products.

In 1935, Marshall Field and Co. reorganized its 24 textile mills into one manufacturing operation, called Fieldcrest.

In 1937, Karastan introduced its 50-color 717 Panel Kirman design in the Karastan Original collection. Says Jackie Dettmar, vice president of commercial design and development for Mohawk, “717 was the top selling rug for next 50 years with no changes to its color, patterning or anything. It’s the rug that built the Karastan franchise.”

1940s: After many years of development, in 1948, Karastan introduced products made with the patented Kara-Loc weaving method. Kara-Loc’s groundbreaking technology wove fibers through the back of the carpet, providing superior durability and performance. This loom made it possible to add more pile yarn per square yard, creating a denser carpet with advanced opportunities for design, color and texture.

1950s: Karastan released its iconic logo, which is still in use today.

In 1953, Fieldcrest was spun off from Marshall Field & Company.

1960s: In 1967, the company launched its first nylon broadloom product, called Coquille, and soon after a nylon shag called Fondeau, one of Karastan’s all-time best sellers. The 1960s saw the introduction of tufted carpet to the Karastan line-up, although woven broadloom still remained the core of its offering.

1970s: Partnering with well-known women’s fashion designer Halston, Karastan moved into the designer world with the launch of a signature carpet collection in 1977. This collection targeted upper-end consumers. The design and color of the collection was cutting edge and has stood the test of time. In fact, the Eloquence design is still sold today.

1990s: Sisal rugs and carpet began trending in the 1990s. This long and rugged natural fiber created an attractive look but was problematic with regard to comfort underfoot, staining and longevity of lifespan. In 1992, Karastan invented a solution with its sisal wool product, which still remains popular today. This woven carpet has the texture and look of sisal with the feel, durability and stain resistance of wool.

In 1993, Mohawk Industries purchased Karastan from Fieldcrest. The brand remains an independent arm of the business today.