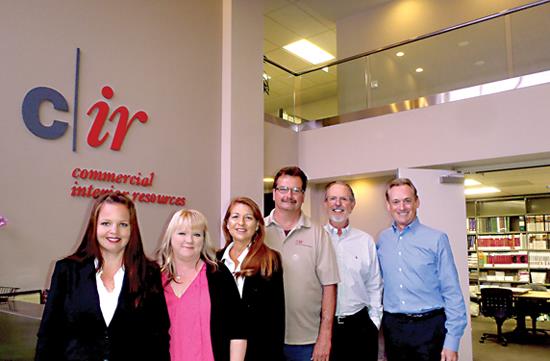 Commercial Interior Resources (CIR) isn’t afraid of digging in. In fact, when it comes to starting a job, CIR wants to be a part of the process as early as possible, be it months or even years before the flooring installation will actually take place. That commitment to being not only a flooring supplier but also a solutions provider through the planning and building process has helped CIR find success throughout its 32 years of business in the competitive southern California market.

MENTORED IN THE BUSINESS
Ken Hurd, president and CEO of CIR, started early in the interiors industry, laboring in his family’s furniture manufacturing business on the north side of Chicago. One summer, he took time off to travel and ended up in Southern California, a place that he really enjoyed. Hurd called his parents to announce his decision to stay in California, and it was a full five years before he returned to Chicago for even a visit.

In California, after a few stops in various interiors-related positions, Hurd got a job at a firm called Designer Flooring, which was owned by Jack Hughes and focused on serving the A&D community and end users. Hughes groomed Hurd in the business of commercial contracting for about four years.

When Hughes announced his intention to retire, Hurd and a partner tried to negotiate a deal to buy him out, but it became clear that they didn’t have the resources to give him what he wanted for the business. Says Hurd, “When I explained that to him, then told him I would be leaving to start my own company, he told me that my success would be the greatest compliment to him.” So, in 1983, Hurd and a partner branched off to start CIR, when the market was, by Hurd’s description, “rocking and rolling.”

“It was pretty easy to get things going then,” he explains. “We started the business in my second bedroom. A door on bricks was used as a desk. We had two folding beach chairs and one desk phone. That was it. But the company grew quickly. Five years later, I bought my partner out, and by then we had moved into an office.”

More than three decades later, Hurd credits his early mentors with helping him learn the business and starting him on the road to success, “I met wonderful people, who helped shepherd me through and helped me get to where I am today. Much of the way I run the business is how Jack taught me. Jack was a very intelligent, articulate and classy guy. He saw this business differently than most others at the time. He was a natural leader and relished the role as teacher and mentor to many people.”

THE CIR WAY
CIR starts each commercial flooring project with a detailed needs-based assessment, collecting as much data as possible with the goal of becoming a trusted advisor to the A&D team, the developers and the end users. “We want to collect as much information as we can at the outset to start making suggestions that are appropriate to use. The earlier we’re involved, the more value we can add.”

Of course, this approach can extend the sales cycle out to multiple years, but that doesn’t faze Hurd. “In this business, we are involved in building relationships long in advance of a project,” he says. “Long sales cycles require commitment and continuity, and the majority of our competitors aren’t willing to make that commitment or don’t build their businesses that way. We’re joined at the hip to the developers for a while. We have to be there when they need us and execute promptly when the time comes.”

And on the technical side of things, Hurd is strongly committed to utilizing skilled craftsmen. All of CIR’s carpet and resilient installers are International Union of Painting and Allied Trades (IUPAT) members and CIR employees, and since carpet and resilient flooring account for 80% of CIR’s floorcovering business (60% soft surface, 20% resilient), the bulk of the company’s installations are performed by the business’ employees.

In fact, Hurd is very involved with his local IUPAT chapter 1247. He chairs the local pension, health and welfare trust funds, is an active trustee for the local apprenticeship training center, and has served as lead negotiator for the past four collective bargaining contracts, representing management.
All IUPAT-certified floorcovering installers have completed a four-year long, hands-on apprenticeship in the field.

A CLEAR VISION
With his unique approach to the commercial contracting business, Hurd says that one of the greatest challenges he faces is getting customers and suppliers to truly understand the value that CIR adds to the building process, adding, “It’s about much more than just getting flooring installed. We do so much more: determining the needs of the parties involved, budgeting, consideration of the product mix, looking at the site conditions, scheduling, compliance, testing. There is so much that happens behind the scenes, and we add value at every step.” And to make all this happen, CIR must both communicate efficiently with the parties involved—without inundating them with information—and have a “tremendously competent” staff to back it all up.

Along with that, Hurd has his sights set firmly on making a difference where he can—and not chasing his tail on jobs where he can’t make a difference. “Our goal is to make sure we are influential in the marketplace. We won’t take over the world. We won’t be a giant contractor. But we strive to be influential in our marketplace and with our customers. We won’t be of value to everyone, but we seek out those that we can be of value to.”

Hurd notes that some parties choose to bypass the commercial contractor completely, but, he cautions, “they have to understand that there is a lot of responsibility that comes with that. If anything goes wrong, it stops the whole process. Do the installers have OSHA 10 and 30 training? Their CPR cards? Are they trained on that particular product? Have they passed background checks? If one of those things goes sideways, the whole process comes to a grinding halt.”