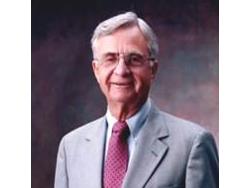 He and his brother Roy worked at Cobble Brothers tufting. Then, in the late 1950s, they founded Tuftco, and, later, Card-Monroe.

Lewis Sr.'s son Lewis Jr. and Charles Monroe carried on the legacy with the founding of Card-Monroe Corporation, which is still in business in Chattanooga.

Lewis Sr. developed the basic tufting technology that revolutionized how broadloom carpet could be manufactured, thus changing the appearance of the American home by making the luxury of wall-to-wall carpet available to the average household.

Card is one of the industry's most accomplished innovators. He had over 150 patents in his name, his last one granted at the age of 95.

Card-Monroe said this of Lewis Sr., “Over more than six decades Lewis applied his talents to transform the world beneath our feet. He was a true pioneer, blazing the trail for today’s multibillion dollar, global carpet industry.

“In 1939 Lewis left Fort Payne, Alabama, the day after graduating from high school to join Cobble Brothers Machinery Co. in Chattanooga, Tennessee, where he worked for his uncle, Joseph Cobble. Lewis soon was promoted to manager at Cobble Brothers. He was later joined in this venture by his younger brother Roy.

“Starting with single needle tufting machines used for making ‘chenille’ (tufted) bedspreads, these men began expanding the capabilities of the machines. First they added multiple needles and then built bigger, stronger frames to hold wider needle bars. Before long the machines were being utilized to create scatter rugs, and eventually the Cards made the first attempts to tuft carpet of various sizes.

“Those initial samples were crude, but the Card brothers could see the potential and gradually advanced the efficiency of their machines and the quality of the product, one step at a time. Lewis is named on over 100 US and foreign patents for tufting technology.

“Over the years Lewis led in the acquisition of a succession of tufting machine companies, including Super Tufter, Card & Co. Inc., Southern Machine Co., Tuftco Corp., all in the Chattanooga area, along with Gowin-Card in Dalton, Cobble Brothers, Ltd. (England) and British Tufting Machine (England), before joining their son and nephew, Lewis Card, Jr., and son-in-law, Charles Monroe, at Card-Monroe Corp.

“The entire CMC family will miss him greatly and forever be inspired by his legacy.”

A celebration of Lewis's life will be at noon on September 15 at First Cumberland Presbyterian Church in Chattanooga, Tennessee, followed by a visitation from 2:30 p.m. to 4:00 p.m. at the Chattanooga Golf and Country Club.

Contributions may be made in the honor of Lewis Card, Sr. to: First Cumberland Presbyterian Church, Baylor School, The Bright School or the University of Tennessee-Chattanooga.