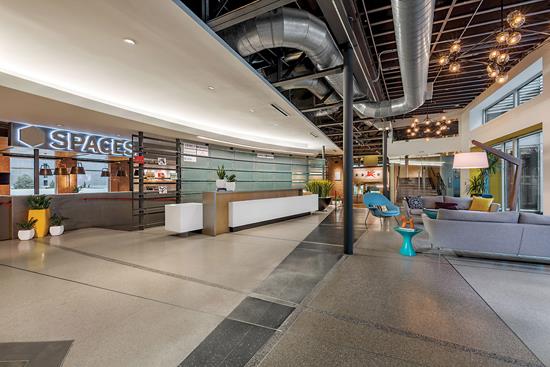 Spaces is a co-working environment in which individuals can rent private or shared work space. The concept-originating in Amsterdam-is gaining in popularity, with 36 locations open or soon-to-open in the U.S. and a good number of others spread across the globe. Dallas Spaces, located at 1919 McKinney Avenue in the Uptown district of the city, was one of the first established Spaces locations in the U.S., and, prior to its launch, Dallas-based IdGroup was called in to rehab a tired existing office location into a dynamic space to serve as a home base and community space for the city’s floating workforce.

To pull freelancers and entrepreneurs from their home offices, garages and coffee shops into an office space that comes with a price tag, Spaces obviously needed to offer an enlightened facility with a host of amenities. Besides the obvious networking opportunities that such facilities enable, Spaces offers design-forward locations with a variety of workspace options, 24/7 access, tailored rental terms, fast Wi-Fi, and services such as mail handling and barista-staffed coffee lounges.

HONORING ITS HERITAGE
The location that was to house Dallas Spaces previously served as an office for HKS Architects, though it had been sitting empty for a little over a year when Spaces leased most of the first floor and the entire second floor, a total space of approximately 60,000 usable square feet. Before its stint as an architecture firm, the building was both a millwork/cabinetry manufacturing plant and a brewery. Portions of the building date back to 1925, and many of the original architectural elements were uncovered and highlighted in the new build-out. For example, in the existing fire stair was an original pulley system that had been used to carry parts and equipment for manufacturing from one floor to another.

IdGroup had the challenge of incorporating a very European/Danish concept into what would be utilized and accepted in the U.S. market. A light wood finish is a central repeating element in the Danish design concept, so for the

Dallas space, Mohawk’s Complex Legends Natural Hickory commercial hardwood flooring was selected, with its layers of wood tones blending to create a gentle movement within the flooring. Complex Legends was utilized in areas where the existing concrete and terrazzo were not salvageable, including in the reception area and the café.

With hard surface flooring and open ceilings throughout the space, carpet tile from Flor was used to create area rugs to help define spaces as well as add interesting color and texture combinations. Acoustics were also considered in the selection and positioning of these area rugs. In addition, private meeting rooms all utilize carpet tile from Shaw Contract.

INDUSTRIAL FOR THE INDUSTRIOUS
In a nod to the building’s origins, the feel and concept of the space is industrial. This was achieved by essentially white boxing the space during demolition and leaving the ceilings open, exposing original brick and masonry walls as well as keeping original concrete flooring where possible. The new and existing bathrooms throughout the space incorporate a whimsical pattern in ceramic tile-utilizing Arizona Tile’s Cementine Black and White mix-that harkens back to the day of the original building.

Three large windows were cut into the south elevation of the building in the new café area to bring light in across the space. This common area is the hub of the space, and natural light was essential to its function. The café is serviced during peak hours, but it can also be scheduled for private events by staff or tenants. In addition to the café, the common area amenities include a private prep room that can be utilized for catering during special or private events.

Dedicated, open co-working areas are utilized by member tenants who do not lease an actual office. A library zone serves as a quieter get-away from these open locations. In addition, Spaces includes a private phone room, break rooms on both floors and glass front offices.

The plan of the building lays out in a “C” configuration, creating an amazing courtyard space in the center that features work areas, lounge seating and gaming areas. The fenced-in zone existed prior to the renovation and was maintained, while most of the original landscaping was removed and replaced with some patterned concrete, new trees, shrubs, synthetic turf, string lighting, lounge seating and gaming areas to create an extension of the lower level café area. This area, as well as the café and reception area, is used for monthly art exhibits, parties and other fun events. The courtyard can also be scheduled for private or public events by staff or tenants.

An existing grey steel wall in the courtyard was salvaged in the new plan. IdGroup worked with local artists to come up with a mural that paid homage to several companies that are based in the Dallas area, such as American Airlines, Mobil Oil and the State Fair of Texas. This helps to create the sense of community that is so important to co-working and Dallas Spaces.