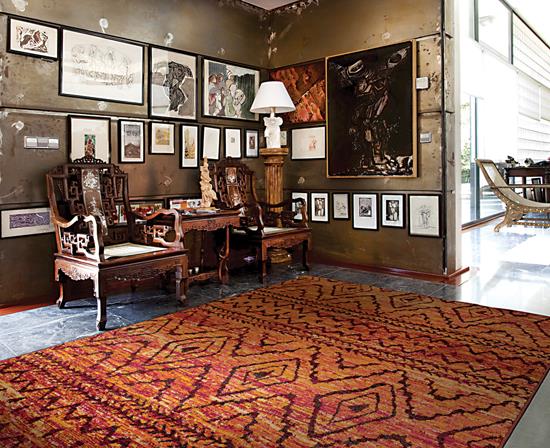 For 50 weeks a year, High Point, North Carolina feels like just another small town that’s past its prime. Formerly known as the “Furniture Capital of the World,” the city’s economy suffered a sharp decline in the 1990s when the lure of cheap Asian labor led to the offshoring of furniture production. Today, however, High Point has traded in its former title for a new one, “North Carolina’s International City,” because twice a year, in spring and fall, it is just that, as the metropolis comes alive with an estimated 75,000 attendees—10% of whom are international—assembling for the High Point Market, an exhibition of furniture, housewares, lighting and area rugs.

It’s a remarkable event to experience. For perspective, consider that the International Surfaces Event attracted roughly 35,000 participants in 2014. With more than double the attendees, High Point Market accounts for 11.5 million square feet of showroom space in over 180 buildings. In fact, according to a study conducted by Duke University in 2013, and commissioned by the High Point Market Authority, the High Point Market contributes $5.4 billion dollars to the local economy, or 1.3% of the total gross state product of North Carolina.

THE EBB AND FLOW OF HIGH POINT
Unlike other flooring categories, a significant portion of area rug sales are made through furniture stores, so it only makes sense that rug players invest heavily in venues where furniture sales are made. However, those investments can add up. It isn’t uncommon for rug players to have showrooms in Atlanta’s AmericasMart Rug Market, the World Market in Las Vegas, New York City and High Point. That’s a lot of rent dollars, and when business came to a grinding halt in the recession, many rug manufacturers pulled out of High Point in hopes of cutting expenses.

“There are a lot of trade shows to go to,” says Brandon Culpepper, vice president of specialty sales for Mohawk’s rug business. “As business became challenging in the recession, many rug players looked hard at what they spent to go to market. In addition to the big shows, there are also micro-shows like Carpet One, CCA, Abbey and local markets in places like Chicago and Tupelo, Mississippi. High Point, at the time, was kind of in a war with Las Vegas.”

However, the rug industry’s departure from High Point was short-lived, and many manufacturers reestablished a presence at the show within a few years, as Momeni did in 2010 and both Oriental Weavers and Karastan did in 2011. “The conventional wisdom was that market activity would migrate to Las Vegas,” Culpepper explains. “But as things slowed out West in the recession, that didn’t happen. Now, we basically have two regional shows: a West Coast-focused show in Las Vegas and an East Coast-focused show in High Point.” Interestingly, in March 2011, International Market Centers, which owns the Las Vegas Market, purchased the High Point Market, and Culpepper reports that showroom space for the two markets is now bundled together and sold as a package deal.

According to Culpepper, the High Point Market has changed over the years with regard to who is in attendance. “Now that the market has stabilized and High Point has recovered, it is more designer oriented than furniture retailer oriented. There are just fewer retailers buying product than there used to be, as more large national players means fewer people walking the halls. But everyone wanted to get back in because we’re all doing business with anyone we can.”

ECOMMERCE MAKES AN IMPACT
As with other home furnishing products, ecommerce has become a significant channel for area rug sales. Though only a few years ago there were significant concerns from the industry about how accurate representations of color and texture could be transmitted via the Internet, that doesn’t seem to be a deterrent to consumers who are increasingly happy to shop from the comfort of their home without the hassle of dealing with driving, parking and sales staff.

In addition, ecommerce isn’t limited by square footage, as a brick-and-mortar retailer is, which means that consumers can access a broader assortment of styles and colors. As area rugs play an important role in setting the tone for a space and, in addition, as tastes vary greatly from consumer to consumer, an expanded offering is a significant benefit. As such, sites like Overstock, Zulilly and Wayfair are becoming increasingly important avenues for area rug producers.

RUG MANUFACTURERS
Surya had a significant presence at the High Point Market. In fact, this presence was felt even before attendees took a step inside the market buildings: a plane pulling a Surya banner circled overhead, and the company’s name was emblazoned on attendee badge lanyards. The enthusiasm extended into the company’s 18,000 square foot showroom, within which Surya was exhibiting much more than rugs. The company sells custom and ready-to-hang wall art; lighting; décor and accessories; outdoor accessories, outdoor lighting and outdoor area rugs; and pillows. And at High Point Market the firm introduced its new bedding sets.

In its area rug business, Surya seeks to cover every price point with its offering, which ranges from machine-made to hand knotted, and the company had new introductions in its full range. The company notes that textured products were hot at the show, as were blue and grey tones. Hathaway is a new geometric design that offers a textured look. The Egyptian made piece retails for $375 in a 5’x7’. It is 100% polypropylene, machine made and has a transitional look.

Ten years ago, Surya—then solely an area rug manufacturer—was a $2.5 million company. This year, it expects to gross $100 million. Though the rug business is still Surya’s primary business in dollars, it is a shrinking category by percentage of the product line. Interestingly, Shaw Living veteran Jim Curtin was hired as vice president of sales by Surya after Shaw’s area rug business was dissolved—so, though the firm is expanding beyond its rug roots, the company is certainly committed to growing its area rug business.

Nourison had a showroom conveniently located near the entrance of the International Home Furnishings Center, with its two new collections displayed prominently for passersby to see. Dynasty is a new powerloomed collection of eight designs made with 100% New Zealand wool. The collection is based on 16th century rug designs but with an updated color palette. Emperor Midnight is a koi pond design in rich, watery blues, while Lotus Ochre offers a more subtle palette with a dramatic border and an aged feel.

Nourison was also highlighting its new collection called Glistening Nights by furniture designer Michael Amiri. All of the designs in the 26-rug collection carry a glamorous feel in muted browns and greys, and many contain a bit of sparkle achieved through the use of Lurex fiber. With Greek key patterns, animal prints and traditional looks, the collection—which contains both wool and polyester blends—offers a great deal of variety.

Oriental Weavers has introduced quite a few new collections in its Tommy Bahama brand since it secured the license in late 2013. For this show, the company expanded Tommy Bahama with two new lines called Seaside and Villa. Seaside is an indoor/outdoor collection priced at $149 for a 5’x8’, and it offers 14 vibrant looks in greens, corals and neutrals. Villa is a collection of traditional Tommy Bahama designs that includes a lot of botanicals and retails at a $199 price point for a 5’x8’. The assortment is offered in ten styles in muted colorways.

Covington is Oriental Weaver’s new patterned shag collection, with looks ranging from trellis patterns to florals, tribals and filigree for a total of 12 styles. The polypropylene collection retails for $299 in a 5’x8’. Lastly, Nomad is the company’s new cross woven polypropylene rug collection that comes in ten styles ripe with bright tones—sometimes predominant and sometimes used as pops of color—and tribal patterns. Nomad retails for $349 in a 5’x8’.

Momeni introduced quite a few new collections at High Point and added on to other successful collections as well. Havana is a new introduction with a botanical look made with space-dyed polyester. The collection is hand tufted in China. Rio is another new collection of popular textile patterns in jewel tones. Rio is also 100% polyester.

In addition, the company introduced three new collections that retail at a $199 price point for a 5’x8’: Tropez, Ghazni and Ziegler. Tropez is a tip-sheared polyester loop with a subtle palette and several designs featuring leaves and fronds. Ghazni is a high twist polypropylene look that is machine made in Turkey. The collection carries traditional looks with borders and deep tones. Ziegler is another machine-made Turkish collection that carries the look of a hand knotted and washed piece. The collection, which was expanded for the show, has 30 designs in total and is polypropylene.

For the High Point show, Karastan chose to revamp its Axminster collection, which was started in 1928 and is the biggest part of the company’s rug line. Sovereign, one of the new collections, is created on the same machines used to

create the original Axminster products in the company’s Eden, North Carolina plant. For the collection, Karastan chose 88 new on-trend colors and used these to rework its traditional, bordered patterns. The result is five new Axminsters made of fully worsted wool that retail for $1,199 in a 5’x8’.

In addition, the company introduced the Bravalo collection, consisting of traditional Karastan designs that have been distressed and recolored, many in vibrant jewel tones. There are seven new pieces in this collection.

The Evanescent collection is also designed to look aged, and is highlighted with silk accents. The seven rugs in this collection are new designs, most of which are borderless, and retail for $999 in a 5’x8’.

Lastly, the company introduced Pacifica, made of Mohawk’s Everstrand PET fiber, derived from recycled water bottles. The collection is U.S. made and, therefore, can be quickly retooled to respond to market trends.

Dalyn was at High Point talking about its new merchandising system, called Bella, for creating custom looks. For Bella, the company offers a large display piece to show the full design, then utilizes a blanket to display the available colors in each design. There are 16 pieces, each available in five colors and 36 sizes—and orders are turned around in three weeks. A 5’x8’ retails for $999.

Orian, which has traditionally sold to large mega-retailers, is now seeking smaller retailers, even mom and pop stores, to sell its products as well. For that reason, it is now participating in trade shows, such as High Point, where it hasn’t had much of a presence in the past. The company reports that it is now selling many rugs through ecommerce as well.

At the show, Orian unveiled Cadence, an over-dyed look that comes at a price point lower than many over-dyed competitors at $99 for a 5’x8’. The firm also came out with Spoleto, a transitional look with lots of bright tones.