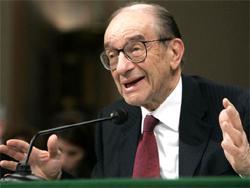 Washington, DC, Dec. 14, 2009--Former Fed Chairman Alan Greenspan said the  Federal Reserve has done all it can do to reduce unemployment and needs to worry more about the risk of inflation from the stimulus it poured into the economy.

"I think the Fed has done an extraordinary job and it's done a huge amount (to bolster employment). There's just so much monetary policy and the central bank can do. And I think they've gone to their limits, at this particular stage," Greenspan said on NBC's "Meet the Press."

"You cannot ask a central bank to do more than it is capable of without very dire consequences," Greenspan continued, saying the United States faced a serious long-term threat of inflation unless the Fed begins to pull back "all the stimulus it put into the economy."

Greenspan, who headed the central bank from 1987 to 2006, also expressed concern about a congressional effort he said would "very significantly compromise" the Fed's independence.

Greenspan said he expected the U.S. unemployment rate, which is currently at 10 percent, to "be significantly lower a year from now" but still very high.

The U.S. Census Bureau's plan to hire close to 800,000 workers by April will take several tenths of a percent off the unemployment rate, he said.

The recovery in the stock market over the last six to nine months helps by putting many individuals and companies in a stronger position to spend money, he said.