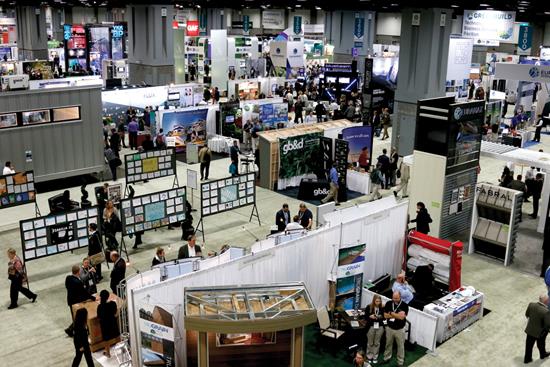 This year’s Greenbuild Conference and Expo, held in Washington, D.C. on the week of November 16, concluded ten days before the Paris climate change conference, and the juxtaposition of the two events highlighted some of the fundamental differences between how the free market and governments work. What stands out most is how much governments could learn about the economic sustainability of transformative steps toward environmental sustainability.

The green building community has long understood that there is only one possible response to inevitable change: you embrace it. So it’s not about whether a business or an industry—or even a nation—can afford to go green, it’s about how it’s going to do it. Once that’s accepted, transformation suddenly becomes much more efficient and effective. And it becomes an engine of growth.

Nothing better illustrates the commitment to green building than the most important aspect of Greenbuild—education. The program this year offered over 260 options, from LEED workshops and seminars to tours and case study reports. It’s the most concentrated green building educational summit in the world, and it’s the biggest draw of the event. The show floor, fascinating and dynamic, and educational in its own right, is the most public face of the event, but the real star is the education program.

This year also had great speakers, including an opening plenary featuring film director James Cameron; Mika Brzezinski, co-host of Morning Joe on MSNBC; and Julian Castro, secretary of US Deapartment of Housing and urban development. There were also talks by USGBC personnel, including Scot Horst, chief product officer, and Mahesh Ramanujam, COO (and future CEO), about the future of USGBC and GBCI (Green Business Certification Inc.). And Elizabeth Kolbert, the Pulitzer Prize winning author and journalist whose series called The Climate of Man won the American Association for the Advancement of Science’s magazine award, was among the master speakers.

Also, a new program operator consortium was launched at Greenbuild, with ASTM International, NSF International, ICC Evaluation Service and Sustainable Minds coming together as a unified resource and advocate to encourage and promote the use of EPDs and LCAs, and to create a more streamlined, less confusing system for green assessment.

This year’s Greenbuild drew crowds topping 19,000, a 9% increase in attendance over last year’s event in New Orleans. The number of exhibitors was about the same as in 2014, with 548 companies on the show floor, taking up 144,300 square feet of exhibit and display space.

GREEN FLOORING HIGHLIGHTS
Perennial exhibitor Shaw Industries had its booth decked out in a recent commercial carpet collection, The Park, and it encouraged attendees to stop by for “conversations in the park” about topics like sustainability and material health. The firm even scheduled sustainability leaders, like David Gottfried, Bill McDonough and Rachel Gutter, to drop by and join in the conversation.

Also, Shaw flooring, including engineered hardwood and custom rugs, was featured in the Greenbuild LEED Platinum show home, the most popular showroom exhibit at Greenbuild.

Mohawk Industries, the largest flooring manufacturer on the planet, had a strong message in its space this year: transparency. The booth was like an advertisement for the Living Building Challenge, with the space framed by four large freestanding billboards designed as Declare labels for Mohawk products. The firm emphasized its Red List Free offering. All of its 700 carpet products have been through the Declare process, with 490 declared Red List Free—carpet tile with PVC backings didn’t make the cut. Next up will be Declare labels for vinyl, hardwood, laminate and ceramic.

Interface, the carpet tile specialist widely credited with pioneering the carpet industry’s drive toward sustainability, focused its showroom conversations on the relationship between design and wellness and the role of biophilia in the built environment. The firm also sponsored the Illuminate educational track, which was curated by the International Well Building Institute.

On the floor of Interface’s booth was its new Equal Measure carpet tile, which uses 100% recycled Aquafil nylon face fiber and the firm’s recycled backing for a total of 82% recycled content.
Another leader in sustainable manufacturing is Forbo, the Swiss firm best known for its linoleum offering. When it comes to transparency, Forbo is at the leading edge, going beyond EPDs and HPDs to measure exposure to humans and the environment with the UseTox assessment tool.

One topic emphasized at Forbo’s space this year was customization. Every project has specific needs and requires a unique route to achieve a sustainable profile—in other words, there’s no one-size-fits-all solution for green building. Forbo associates work closely with clients to come up with customized approaches to green projects.

One of the more green-savvy companies in the industry is Universal Textile Technologies (UTT), which is constantly creating alliances with large institutions and agencies, from Yellowstone and the National Park Service to the United Soybean Board and the Kennedy Space Center. At Greenbuild, UTT had product displayed at both the USDA’s Bio-Preferred booth as well as in the United Soybean Board’s space. In addition, UTT worked with the Biobased Products Coalition, using the 150 free show floor passes afforded exhibitors to ferry to and from the show federal officials from a range of industries, including the Army and Department of Defense. UTT is best known for its polyurethane backings, BioCel and EnviroCel, with high recycled and bio-based content.

Two firms closely associated with UTT, SynLawn and AstroTurf, are also heavily involved in green partnerships. While AstroTurf focuses on sports applications, SynLawn covers just about everything else, including landscaping applications. SynLawn, which had a booth at Greenbuild, has been particularly busy in urban areas, including prominent installations in New York City, like the Battery Park soccer field and Brooklyn Bridge Park. Its products are increasingly specified on top of high rises and other buildings. And the historic California drought is also driving a lot of business, which is now bleeding over into desert communities in the West, like Las Vegas.

With its certificate pending, SynLawn is poised to be the first artificial turf manufacturer to carry the USDA Certified Biobased Product label. An affiliated company, Signature Accord earned that USDA label earlier this year for its Yellowstone Collection, using UTT’s BioCel Laminate backing. The product was installed at the Kennedy Space Center.

Tim Cole, the new vice president of marketing for Nora Systems, North America, was on hand at Building Design + Construction magazine’s GreenZone demonstration building, where the firm’s Norament XP was the featured flooring. This is the eighth demonstration building BD+C has constructed at Greenbuild, dating back to 2008.

Nora, a German rubber flooring producer, is a well established player in the North American market. According to Cole, Nora was the first resilient flooring manufacturer to have an EPD, which was developed using European PCRs (product category rules). The firm is now updating its declarations to comply with the U.S. system.

StonePeak, which manufactures porcelain in Tennessee, had a booth at the show, where it displayed trendy tile products and discussed its recent product-specific EPD, which it developed using as a foundation the tile-category EPD developed by the Tile Council of North America and completed in early 2014.

To Market also had a space on the show floor, and it had on display a range of products, including OzoGrip, an LVT with 75% recycled content (including 52% post-consumer content). OzoGrip Interwoven, with an embossed design that looks identical to woven vinyl flooring, is a loose lay tile with high recycled content. Also on display was Atmosphere, a colorful rubber tile that is fused to a black backing made of recycled styrene butadiene rubber.

MP Global’s booth featured underlayments with recycled content ranging from 94% to 100%. It also displayed its Perfectly Warm line of polyester film underfloor heating with conductive ink. The firm has developed a version for floating floors as well as one for ceramic tile.

DriTac came to the show with two new resilient flooring adhesives, Eco-5700 StrongBond and Eco-5900 MegaBond. Both are Green Label Plus certified for indoor air quality with zero VOCs and solvents. Eco-5900 is designed for the commercial markets for use with the full range of resilient flooring types as well as carpet tile. Eco-5700 targets the higher end of the residential market for carpet tile and resilient flooring, and it can either be used to permanently glue down product or it can be dry set first to function as a pressure sensitive adhesive.