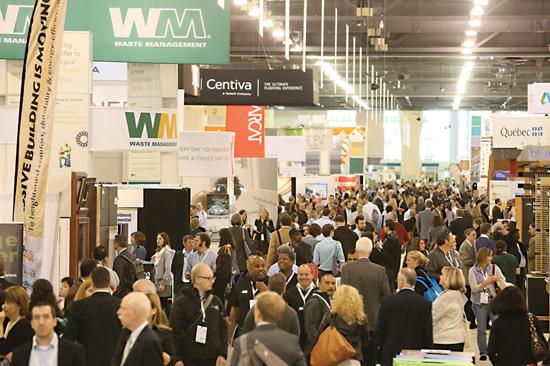 This year’s Greenbuild International Conference and Expo, held at Philadelphia’s Pennsylvania Convention Center from November 20 to 22, was the most dynamic expo in years. It wasn’t the highest attended Greenbuild, and exhibitor numbers were even down somewhat, but just about all the exhibiting manufacturers, flooring and otherwise, expressed satisfaction with the event, a reversal from a trend over the last few years of manufacturers wondering if Greenbuild was really worth the time and money.

With 739 exhibitors showing their products and services and about 22,000 guests attending the event, Philadelphia’s Greenbuild expo was actually the smallest show since 2007, but what it lacked in size it made up for in enthusiasm.

In addition to Greenbuild’s robust education program, which is always heavily attended, the expo also featured a keynote address by Hillary Clinton, followed by a musical performance by Bon Jovi. Statistician Nate Silver, best known for his near flawless predictions about political voting, delivered the closing plenary. Those attending the show also received Explosion Green, a book by David Gottfried, who is viewed by many environmentalists as the father of the green building movement.

Next year’s Greenbuild will take place in New Orleans from October 22 to 24.

LEED V4 CHANGES THE GAME
While some of the enthusiasm on the show floor was based on a stronger economy, what made the event memorable was a clear sense of the green building movement shifting to another level, and that feeling of witnessing a new, significant phase seemed to energize the entire event.

Greenbuild 2013 was characterized by a single word: transparency. The last couple of years have seen a major push by manufacturers of everything from flooring to building materials to increase the transparency of their products. In the flooring industry, most of that has been through the development of environmental product declarations (EDPs), health product declarations (HPDs) and cradle-to-cradle certifications with chemical disclosures.

Much of this new emphasis has been driven by LEED v4, the latest green building certification program developed by the U.S. Green Building Council (USGBC). It was officially launched at the show, but most of the exhibitors had been gearing their programs toward the new standard, which rewards transparency in various forms, for some time.

It’s worth noting that transparency means different things to different people, and the range of programs and certifications out there covers the gamut, from complete disclosure of materials along with all of their implications (eco-toxicity, human toxicity, human exposure, chain of custody, environmental burden, etc.) to product declarations that don’t necessarily reveal any chemistries but instead disclose the effect of materials on various environmental impact categories.

A NEW PARTNER
Last May, the USGBC announced that it had entered into a strategic partnership with Hanley Wood LLC, which owns a range of media and trade shows, including Surfaces. The plan calls for the USGBC to continue to run its education program while Hanley Wood takes over the running and marketing of the trade show.

Next year, Greenbuild is going global. In October 2014, Greenbuild for Europe and the Mediterranean region will be held in Verona, Italy.

According to Rick Fedrizzi, CEO and co-founder of the USGBC, “Greenbuild for Europe and the Mediterranean region is part of the global expansion of the successful Greenbuild Conference & Expo brand. Mario Zoccatelli, president of GBC Italia, commented that green building was not new to Europe, adding, “With its rich history of architecture and building design, this area of the world is naturally focused on sustainable buildings.”

MANUFACTURER HIGHLIGHTS
This year, there was no shortage of flooring producers at the show, and most of the big mills were on hand to discuss their products, the latest programs and certifications, and how it all contributes to credits in LEED v4.

Shaw Industries was at the show with a floor display of its award winning Hexagon carpet tiles, which are fully recyclable and cradle-to-cradle certified. Shaw was the first carpet firm to get cradle-to-cradle certification, a program developed by McDonough Braungart Design Chemistry (MBDC) that, among other things, seeks to develop manufacturing strategies that enable the manufactured product to be reclaimed and fully reused.

The cradle-to-cradle program’s profile has been elevated in the latest version of LEED, contributing to credits in MRc4, the material ingredients section, due to its emphasis on the chemistry of products.

Interface’s focus this year was on the concept of “restorative enterprise.” While sustainability is fundamentally about operating without harm to the environment in a manner that is economically viable and socially responsible, the idea of restorative enterprise takes the next natural step—operating in a manner that improves the environment and the conditions of the people living in it.

A groundbreaking example of a restorative enterprise is the Net-Works program, created through a partnership between Interface, The Zoological Society of London and Aquafil, and launched in the Philippines in mid 2012. Residents of coastal fishing villages retrieve abandoned nylon fishing nets from the region’s coral reef, and they’re paid the equivalent of a kilo of rice for every 2.5 kilos of net. Those nets go to Aquafil, which processes them and turns them into new Econyl nylon 6 fiber, which Interface then turns into carpet, including the Net Effect collection.

It’s an elegant arrangement that improves the ocean environment and protects the coral reefs, brings another source of income to impoverished communities, and provides a valuable recycled material stream to Aquafil and Interface. To date, over 26 villages in the Danajon Bank region have retrieved more than 40,000 pounds of fishing nets.

Another green leader, Forbo, uses Aquafil’s Econyl on its Coral walk-off mats, which were on display at its booth. On the linoleum side, the firm took four of its dynamic Vivace sheet linoleum designs and converted them into tile form. Forbo is positioning itself as one of the most transparent firms in the flooring business, with EPDs on its products accompanied by third party certified HPD disclosures and extensive chemical lists.

Bentley Mills was also at Greenbuild. Earlier in November, the firm achieved cradle to cradle certification on its hardback and cushioned carpet tile programs, and it already has EPDs on all of its products. Bentley displayed a range of products, including the new Western Edge collection of carpet tile and broadloom. All of Bentley’s carpet tiles come in three formats: 24”x24”, 36”x36” and 8”x36”.

Bolyu’s booth was focused on the new Svelte collection from its Level line, which combines its Nexterra PET carpet tile backing with a PET face fiber, for a total post-consumer recycled content of 70%. Svelte has a felted look, and it currently comes in 24 solid colors. This year, the firm intends to expand the styling of Level.

Tarkett’s Centiva and Tandus exhibited together, since they now go to market together. Both the luxury vinyl and carpet brands have strong green stories. Tandus has been a leader in carpet sustainability for well over a decade, with total recycled carpet volume in excess of 225 million pounds, and to date most of its products come with EPDs. Centiva was one of the first U.S. vinyl producers to include post-consumer recycled content in its products. The only line with no post-consumer content is Victory, which enables it to be phthalate free like the rest of Tarkett’s North American resilient flooring offering—there are still phthalates in post-consumer content.

Tarkett exhibited in a separate space from Centiva and Tandus. The firm has been working with Michael Braungart from MBDC for the last few years to create cradle-to-cradle protocols for its products. To date, the firm’s linoleum offering has been cradle-to-cradle certified, and the rest of its product line should attain certification in the next few years. All of the firm’s vinyl flooring made in North America is phthalate free.

The firm also gave out its annual ReStart award for VCT recycling to the Nationwide Children’s Hospital project in Columbus, Ohio, which led to the recycling of over 53,000 pounds of flooring. The awards themselves, designed by Nicole McGee, a Cleveland based sustainable designer, are unique works of art made from reclaimed Tarkett VCT.

Another rubber and vinyl producer, Roppe, was also at the show with two new colors in its rubber tile offering. To date, the firm’s Impact program, which recaptures its used rubber flooring and repurposes it, along with Roppe’s post-industrial scrap, for uses like mulch and pavers, has diverted from landfill close to 9,000 tons of material.

The Resilient Floor Covering Institute (RFCI) was on hand to discuss product transparency declarations (PTDs), which it introduced in October. RFCI developed the PTDs as a tool for the disclosure of product ingredients, and it uses six authoritative chemicals lists, including OSHA, the National Toxicology Program and REACH Substances of Very High Concern.

The PTD is somewhat of an alternative to health product declarations, and it’s focused on the use phase of the product, dealing with exposure to installers and occupants. PTDs are now going through the ANSI process. According to RFCI, the cost to manufacturers to offer PTDs on their products is negligible.

Also at the show was the Vinyl Institute, making the case for PVC as a sustainable flooring and doing its best to educate visitors to its booth about the difference between the hype about vinyl and the real science. The trade organization also wants people to know that it has appealed the disclosure and optimization credit in LEED v4, part of which relies on the use of chemicals of concern lists. The Vinyl Institute believes that some of these lists unfairly target vinyl with dubious science.

To Market showcased its Atmosphere Fusion, which is being launched this winter. The 38”x38” tile features a flocked nylon face fused to a backing made from reclaimed SBR rubber tires. The high performance product is washable, halogen free and contributes to LEED points.

Schönox displayed its Synthetic Gypsum self leveling compound, Schönox AP, which features over 50% post-consumer recycled content. According to the firm, the compound won’t shrink, so it can go over all sorts of subfloors and has a PSI point load pressure rating of 5800. There’s also Schönox APF, a fiber reinforced synthetic gypsum.

At Crossville’s booth, much of the talk was about Hydrotect, the finish that actually cleans the air through the catalytic properties of copper, silver and titanium dioxide. Hydrotect is licensed from toilet maker Toto, which also partners with Crossville on recycled content—Crossville uses Toto’s post-industrial waste in the manufacture of its porcelain tiles. Also on display were the firm’s Laminam thin tiles, for use on both floors and walls.

StonePeak also had thin tiles on display, including its 6cm Pascha Wood line, which comes in five colors in 8”x96” planks. The porcelain planks weigh only 3.17 pounds per square foot. All of StonePeak’s U.S. manufactured products are Green Squared certified.

Mercier, which manufactures hardwood in Quebec, was also at the show as part of a consortium of Quebec based firms. Mercier is vertically integrated from sawmill to finished floor, and all of its hardwood is Greenguard certified. It also uses a high performance soy based finish, which it came out with two years ago.

Much of the talk at the DuPont space was about the firm’s new licensing agreement with Universal Fibers on its Sorona triexta polymer, for which Mohawk currently holds an exclusive license in the domestic residential sector, along with a smaller commercial offering, under the SmartStrand fiber brand. Universal’s participation should lead to an elevated profile in the commercial market for the 37% bio-based fiber.