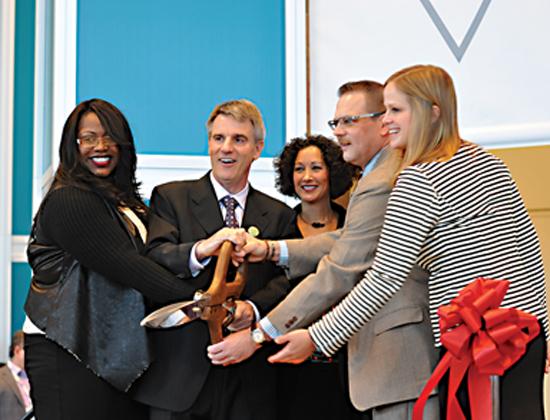 Greenbuild was held in San Francisco from November 14 to 16 at the Moscone Center. This was the 11th year for the Greenbuild International Conference and Expo, a function of the U.S. Green Building Council (USGBC), and the first time the conference has been held in California, a location that seems like a natural fit since California is a U.S. leader in the sustainability movement.

Early on, carpet companies were a significant part of the USGBC movement, and they were well represented at Greenbuild. Many of those early players—Mohawk, Milliken, Bentley Prince Street, J+J|Invision and Tandus—have disappeared from the Greenbuild floor. In fact, this year only two carpet companies were in attendance: Interface and Shaw Contract. Antron/Invista was absent as well, though DuPont was there talking about Sorona. On the hard surface side, Lyptus and USFloors were missing, though both companies have a strong green story to tell. One reason for this may be that the trade show and seminars compete for the attendees’ time at Greenbuild, and, with many notable seminars for CEU credit, the show floor is often somewhat sparse of attendees in comparison to other trade shows.

The conference featured many notable personalities. Co-hosts of MSNBC’s Morning Joe, Mika Brzezinski and Joe Scarborough, led the opening plenary and hosted panels featuring Twitter co-founder Biz Stone; mayor of Newark Cory Booker; urban revitalization strategist Majora Carter; environmentalist and author Paul Hawken; COO of Kohler, David Kohler; New York’s former governor, George Pataki; and Gavin Newson, lieutenant governor of California. Bill McDonough, founder of the cradle to cradle concept, was honored at the event and also served as the speaker at the closing event. In addition, he was on hand—along with actors Susan Sarandon and Meryl Streep—at The Cradle to Cradle Products Innovation Institute Gala on the first night of the show.

Last year, EPDs (environmental product declarations) were the talking point, and this year brought the advent of HPDs, health product declarations, which speak about a product’s impact on the humans inhabiting the space. These include standardized disclosure for product contents, emissions and health information. The program, the think tank of which is composed of A&D representatives from major firms, was first a pilot test program by 30 manufacturers and reviewed by 50 users. It was revised based on feedback from the pilot, and, as of last month, version 1.0 was made available for public use.

Armstrong was at Greenbuild talking about its new VCT reclamation program. The company sends a gaylord to a job site and collects all qualified product, not only Armstrong tile. There is no cost for the site contractor (they are actually saving money because they don’t have to dispose of the product themselves), and there are no minimums on quantity. ChromaSpin is a new VCT that is being made with material recycled through the program. It has 10% recycled content. ChromaSpin is a monolithic, layered jaspe chip visual, similar to Medintech. It is available in 32 colors.

Centiva’s Greenbuild message followed the themes of the event itself: lifecycle thinking and transparency. Regarding lifecycle thinking, the company emphasizes that its products are meant to have a long life with less energy, chemical and water used in their maintenance. And, at the end of life, they can be reclaimed.

In addition, Centiva holds third party product certifications, including FloorScore, which certifies the firm’s products as low VOC; Greenguard for its environmentally-friendly adhesives; and NSF 332, which looks at the full lifecycle of products from materials to end of life. Two of Centiva’s product lines, Contour and Victory, have been certified silver under this program.

Sister company of MP Global, CoMC sells floating porcelain and ceramic tiles with a plastic locking substrate, which eliminates the need for thinset. This means that at end of use CoMC products can be pulled up and reused or donated. CoMC’s tiles go to market under the names Snapstone, Avaire and Eclipse.

Crossville was the first tile company to attend Greenbuild, and this was its tenth year exhibiting there. The company had a Toto toilet in its booth as a prompt for starting a conversation about its Tile Take Back program partnership with Toto. Interestingly, all three players in this partnership were exhibiting—Crossville, Toto and SCS, the third party that certifies the process—and all three were talking about the program.

The company was also exhibiting its Limestone product, different limestone looks from across the world recreated in porcelain. Limestone is a hybrid commercial-residential offering. The product launched at NeoCon, but at Greenbuild the company was rolling out new sizes and shapes to increase installation options.

Fiber maker DuPont’s exhibition focused on Sorona, its renewably sourced fiber. DuPont’s strategy in creating the fiber is focused on three social challenges: feeding the world, reducing dependence on fossil fuels and safety/protection of the environment. Sorona fiber can be used for both commercial and residential products. On the residential side, the product is exclusive to Mohawk in the U.S.

DuPont was also talking about Soft-n-Safe, a new plasticizer for vinyl sheet and PVC backed sheet tile that can be used to replace phthalates in PVC. The material is so safe that it can actually be used in food products.

Interface considers Greenbuild one of the best opportunities to interact with the thought leaders of the sustainable movement and encourage conversation among the stakeholders in this arena. Bill Browning from Terrapin Bright Green, an environmentally focused consulting group, was at the show talking about biophilic design, the idea that the built environment can be designed to help people feel and perform better through closer connection with the natural world. As a nod to the natural world, Interface’s Greenbuild booth was home to three jellyfish.

Interface’s new carpet Urban Retreat follows biophilic principles. The product is available in a 10”x40” plank and takes on the characteristics of a wooden plank. With the divestiture of Bentley Prince Street, Interface is purely a modular tile company now.

Tarkett, which says that it started to recycle in 1956, has moved its environmental strategy one step further now with cradle-to-cradle strategy. The company’s booth had graphics elucidating this closed loop design.

Tarkett took the opportunity at Greenbuild to discuss the importance of people-friendly spaces, which translates to healthy, safe environments for the humans within them. With 60 million people with allergy or asthma problems in the U.S. (one in five households) and increasingly energy efficient spaces, it is more important than ever that the finishes be healthy. To that end, by 2014 all Tarkett products will be phthalate free. Tarkett says it was the first company to have emissions levels that were undetectable.

Shaw Contract Group was offering visitors to its Greenbuild booth the opportunity to give back through the company. Clients could scan a QR tag and choose one of three charities—The Design Industry Foundation Fighting AIDS; One Percent Foundation, an organization committed to engaging young adults in philanthropy; and Mass Design Lab, a global design lab focused on uniting design and public health—to which Shaw would donate on their behalf.

All Shaw Contract’s products are cradle-to-cradle. The company was displaying Dye Lab at Greenbuild, which won a Best of NeoCon Gold and just became available last month. Next spring, the company will open the first cradle-to-cradle manufacturing facility in Asia.

Teragren was at Greenbuild talking about the new focus of its founders, David and Ann Knight—the establishment of bamboo farms in Alabama. The farms will provide economic output for an area that needs it and will mean that shipment of bamboo—a smart environmental choice based on its quick propagation—to U.S. manufacturers will be a much more eco-friendly endeavor. The fiber will be used for flooring as well as veneers, panels and fiber.

Tate is the marketshare leader in raised panel access flooring. Each year, the company continues to add a wider range of finishes that can be provided as a wearlayer in its elevated flooring systems to be used with carpet tile, ceramic and porcelain tile, wood, bamboo, stone and resilient flooring.

To Market came to Greenbuild with two product lines, Ozogrip and Atmoshere. The company’s products, which also get points for style, are PVC tile and plank that require no glue for installation. In comparison to other products that float without an adhesive or click system, To Market’s products are thicker and are built with a fiberglass substrate, so they don’t shrink or change shape over time.

Forbo is gearing up for the 150th anniversary of the invention of linoleum next year. The company was discussing its support of the HPD program, distributing a brochure relating to green chemistry. Forbo was also talking about its upgrade of Topshield 2, a finish that is occupancy ready and doesn’t need to be stripped. The product is renewable and does not use polyurethane. In addition, its Sustain 885M, an adhesive for linoleum, was a discussion point; Sustain 885M contains 20% post-consumer recycled content and zero solvents. Its packaging is biodegradable in both turned and unturned landfills.