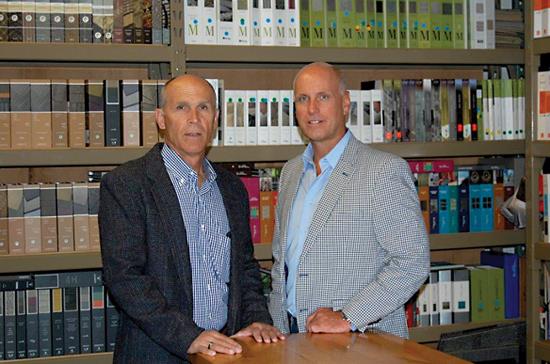 Floors by Beckers is a nearly 60-year-old, second-generation, Minneapolis area commercial and residential flooring business led by cousins John and William C. Becker. In spite of its deep roots and good name, the business hit trying times during the recession that nearly led to its demise. However, under John and William’s leadership, Floors by Beckers made a series of strategic yet challenging changes and is now seeing the payoff for all those tough calls.

Floors by Beckers supplies and installs carpet, ceramic tile, hardwood, resilient and specialty flooring for commercial and residential application. Roughly 95% of its business is in the commercial market, with a focus on the healthcare, corporate and institutional sectors. Hospitality and multi-family work are also significant for the firm.

BUILDING A TEAM
Like many retailers and commercial contractors in the floorcovering industry, John doesn’t hire for experience or product knowledge, but rather for the potential of the prospective employee to fit in with Floors by Beckers’ corporate culture. In John’s opinion, the job can be taught, but values cannot. “Our hires aren’t based on what the individual can bring to the table for sales,” explains John. “I believe that if we can get a well-rounded person, we can bring them on board and teach them.”

To that end, John has every interviewee meet with several members of his staff to get a broad-based opinion on whether the potential employee is a good fit. What’s more, once an employee is on board, they spend their first days moving from department to department, sitting down with established employees in an effort to gain an understanding of each individual’s role in the organization. “We afford them time to learn the organization on the front end,” says John. “They have the ability to go watch and learn what each position does.”

An enthusiastic Starnet member, John points new hires to Starnet’s webinar training and educational tools as an introduction to the flooring business and has them sit down with Starnet preferred suppliers as a means of gaining product knowledge.

The first iteration of the business, Beckers Brothers, was begun by four Beckers—Harold, William B., Jim and Richard—in 1959. Started on a shoestring, the four brothers worked hard and invested what they could back into the business. According to John, who is Richard’s son, the Becker brothers caught a few breaks along the way that enabled them to survive, one of which was their introduction to the newly invented seam iron in the early 1960s.

At the time, carpet seams were sewn by hand, a time-

consuming task. The seam iron, which was used to melt a hot tape that sealed the seams, offered an alternative to hand sewing with a remarkable benefit: time savings. Becker Brothers tried the seam iron out for the inventor with amazing results. “They completed a job in half the time it would take to sew, so their profitability skyrocketed,” explains John. “They made enough extra profit to buy a truck and really got started.”

The second break came in 1972, when Becker Brothers established a relationship with Dayton’s to act as primary installer for its residential work and manager of service operations for its department stores’ flooring. Dayton’s, which founded Target, was a major force in the Midwest, and Becker Brothers’ relationship with the corporation lasted for more than two decades, through the company’s acquisition of and transition into the Marshall Fields brand. During the 1980s, Dayton’s projects grew to account for more than 90% of Becker Brothers’ work, and that began to worry William C. and John, who at this point were already involved in the business. “I saw our future,” says John. “Our company was too dependent on another for revenue and relationships. We had too many eggs in one basket.”

What’s more, John and William C. believed that it was time for Becker Brothers to move from an installation house to a full-service floorcovering dealer. “We were doing eight or nine of the steps in a ten-step process in getting flooring to the end user,” says John. Why not sell the material as well?

In 1994, the pair launched Floors by Beckers. This enterprise turned out to be especially advantageous when, only two years later, Dayton’s took the service piece of its business in-house. “For all those years, we were really strapped to their hip, but we could see the writing on the wall,” John adds. “Dayton’s eventually took over the service piece, hired our installers away and made them non-union. We survived, but it was a messy time.”

A UNION HOUSE
Floors by Beckers is, and long has been, a union shop with more than 50 full-time installers who operate under the United Brotherhood of Carpenters. Floors by Beckers’ installers focus on resilient, rubber and soft surface products, and the organization pulls in subcontractors for ceramic and hardwood work.

John and his production managers put a lot of thought into the assembly of installation teams, thoughtfully matching the personalities, communication strengths, talents and skills of the installers with the culture of the job on which they are working. “The installer is the last who touches the customer essentially,” John notes. “If they leave them with a great experience, we have done our job. We negotiate well and really partner with our customers. When you are in a customer’s facility, you are their guest and an extension of them. If their team has a bit of a different culture from ours, we adjust.”

RIGHTING ITS RECESSION WOES
Following its break from Dayton’s, Floors by Beckers had more than a decade of success and growth as a full-service floorcovering dealer until the recession took hold. “Two-thousand-eight was a pretty good year,” says John, “but when 2009 hit, our top line numbers were cut in half. We did not react quickly enough with staffing. We were over-staffed for nine months. We held on, thinking things would change, and it cost us dearly.”

Floors by Beckers survived by “getting back to basics,” as John calls it. This involved cutting staff, turning a critical eye toward spending, and restructuring systems.

“Sometimes you can overcomplicate business,” John explains. “We empowered our employees to make decisions and gave ownership to people in their projects. We established good communication systems, both electronic and verbal. We backed off of micromanaging and really got our finances in order. We paid attention to the details, and that is what has really catapulted our bottom line.”

MANY HANDS MAKE LIGHT WORK
John was a hockey player in his youth, and that experience influenced the vision he has for how Floors by Beckers should operate. “My past is in hockey. I played through the college level. Our team won championships, and winning teams have to have great leaders.”

As a leader, John prioritizes teamwork as well as having a service-driven approach to operations. “Our biggest asset is team,” says John. “Many hands in our organization touch each order. From a $300,000 project to a $3 million project, I would say that ten to 12 people touch each job, even before the installation. We stress team.”

Including John, there are 12 members of the Floors by Beckers sales team, who, in addition to sales, also handle project management. Floors by Beckers project managers sell jobs, bid and build business, then turn over the jobs to four project coordinators who assist with bidding and production documents, order materials, handle scheduling and invoice all completed work. The project managers, however, stay involved throughout the process, seeing each of their jobs through to completion and maintaining relationships with the customers.

John also values the sort of traditional aspects of customer service that many overlook today, “When a customer calls us, a live voice answers the phone, and we strive to always return calls the same day if we can. We beat everyone on service.”

Looking into the future, John believes that maintaining the sort of healthy, organic growth that he values is his greatest challenge. “Managing our continued growth in a sustainable manner and building a team and system that parallels that growth is central. If you have a target of $40 million, you don’t do business the same as you did at $10 million. Finding and keeping personnel is key. Statistical data says that the youth of today will have ten to 12 jobs by the time they retire. Maintaining an environment and culture that keeps the best people on our team is my goal.”

To that end, Floors by Becker prioritizes a work-life balance, encouraging employees to take their vacation time and enjoy their days off. Says John, “Don’t wait for retirement. Live while you’re living because there are no guarantees. I just got back from a trip to British Columbia with business partners and friends. I could have stayed home and worked—there’s always a lot to do—but I believe in balance. If there isn’t balance, you can see people burn out and become disgruntled.”

THE ST. CLOUD OFFICE
John’s partner, William C., runs Floors by Beckers’ St. Cloud office, which was started five years ago and is roughly an hour from the main location. The branch has grown significantly and handles much of the company’s out-of-state work, which includes North and South Dakota and Wisconsin.

The St. Cloud branch recently moved to a new location that offers a bit of warehouse space but is serviced primarily through the company’s 45,000-square-foot central office and warehouse in New Brighton, which is a suburb of Minneapolis.