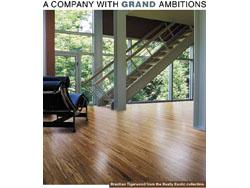 The first time I noticed Faus Floors was back in 2000, when that firm showed up at the big ceramic tile show, Coverings. It seemed an unlikely place for a laminate flooring producer, but this small Spanish manufacturer was there to test a product that looked so much like ceramic tile that visitors had to get down on their hands and knees to know that it wasn’t the real thing.

At the time, nobody had ever heard of this family owned company, which made its U.S. debut with a collection of impressive laminate products it private labeled for Shaw Industries. Over the next several years, Faus continued making private label products for a number of American manufacturers, all the while honing a growing reputation for innovation and quality with technology breakthroughs like Embossed-In-Register surfaces, Interplank Design, MircoBeveling, LongStrip and the FasTrim 5-in-1 molding system—technology which made faux wood and stone laminates strikingly realistic, so realistic that laminate flooring has done far better than anyone could have dreamed when it was introduced to the U.S. in the early 90s.

Faus was started in 1953 as a small carpenter’s workshop in the picture postcard Mediterranean town of Gandia, Spain, but its focus has been squarely on the American market at least since 1997, when it established a U.S. office in Dalton, Georgia under the direction of Juan Flores.

Last fall, as its chairman and founder, Andres Faus, was dying from an inoperable brain tumor, the role of chairman was turned over to Juan Negre, who had been president of the company since 1994. Juan Flores, who had been general manager of the U.S. operation, was named president. Following the death of Andres Faus, the firm was acquired by Negre and the management team, along with a Spanish investment bank, and Finsa, Spain’s largest producer of chipboard and MDF. That acquisition gave Faus the capital it needed to move from a small laminate producer to a major player in the world market. Finsa’s extensive fiberboard and timber holdings also make it a fully integrated player.

Long before the acquisition was completed, though, Negre and Flores had already begun planning dramatic growth for the firm. Last October, it acquired 78 acres of land and a 400,000 square foot building in Calhoun, Georgia. That same month, it acquired a facility in Shanghai, China that would start production earlier this year with seven presses and an output that would all go to the U.S. market.

And long before the last of three presses were riveted to the floor of its Calhoun, Georgia plant, the company launched its own U.S. brand, Faus Floors, with the Surfaces 2005 introduction of the Masterpieces Collection. Before the first pallet of Masterpieces had been sold, the firm began establishing a U.S. distribution network. Remarkably, in little over a year, Faus has been able to do something few new brands have ever been able to do—put together one of the most high powered distribution networks in the nation, a network that gives it saturated coverage from New England to Texas, all along the highly populated West Coast and into Canada. Its distributors read like a who’s who in flooring distribution: Bishop, Butler Johnson, Bishop NE, Cole, Dealers Supply, Hoboken, Melmart, Onthank, Roane, T&A/Inland, and T&L.

The firm was able to put together this impressive network only because its reputation for great looking products, quality and a constant stream of cutting edge innovation preceded it.

Faus celebrated the grand opening of its U.S. operation earlier this month, and as both Juan Negre and Juan Flores will tell you, this is only the beginning of a dream. Today, Faus has 16 presses running in Gandia, ten in Shanghai and three in Calhoun. That impressive collection of presses gives the company the flexibility to not only create one of the most varied product lines in the business, but also one of the highest quality lines. Those presses use a combination of computerized artificial vision, precisely monitored controls—heat, cold, even the tension in the printed paper are carefully controlled—and good old craftsmanship to create that vaunted quality.

Gandia has two plants today, but within the next five years, the company will move everything onto a single campus that boasts the most up-to-date equipment the company could buy, equipment that represents an investment of 75 million euros—about $90 million—over the past six years. Some 1,200 people keep the Gandia plants humming through three shifts a day, seven days a week.

The energy and enthusiasm at Faus these days is palpable. Juan Negre says the secret to the firm’s success is the desire to constantly bring new and better products to the table. He points to the latest introductions as an example, products that are being unveiled at the same time as the new Georgia plant.

There’s a handsome 9 foot display (3,800 have already been sold; the goal is to have 4,600 in select retail stores by the end of the year). There are new additions to the Masterpieces Collection. There are two brand new collections: Classic Americana and Really Exotic. And there are even two new technology breakthroughs.

Classic Americana has three wood grain planks—oak, cherry and walnut—in three different shades ranging from light to dark. This new collection, which is priced between the high end Masterpieces collection and the more value oriented Essentials collection, is made in China.

Really Exotic, which was designed to capitalize on the American love affair with exotic woods, is truly spectacular. Its four popular exotic species—tigerwood, wenge, walnut and Santo mahogany—come in 12” planks that have 3” and 6” wood strip widths. All of them feature UltraClarity, a new technology which makes contrasting colors and textures pop out of the background, and DualFinish, which shows bright and matte areas on the wood surface with a precision and clarity that makes these products remarkably realistic.

Faus’ total sales are in the range of $200 million right now, with more than $125 million of that total coming from the U.S. But with the Chinese plant just recently opened, the U.S. plant already turning out its first products, and the new distribution network already selling the Faus Floor brand throughout North America, watch for those numbers to rise dramatically.

And watch for Juan Negre and Juan Flores to continue raising the bar on what we can expect from this dynamic company.