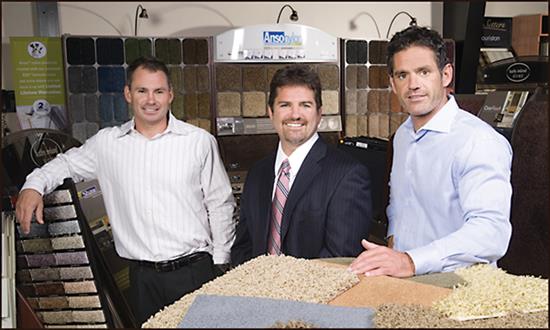 Brothers Jason, Lance and Austin Calvetta opened their first Calvetta Bros. Floor Show in Bedford Heights, Ohio in 1999. Eighteen years later, with four locations and $16 million in annual revenue, the brothers don’t attribute their impressive success to any magic formula or trade secret, but to relationships-both those they have with one another and those they have established with the community.

FAMILY DYNAMICS
Three kids of the same gender with less than four years between them in age may seem like the makings of competitive dynamics, but according to Austin Calvetta, that is not the case for he and his brothers, who have run their business together conflict-free since its inception. “We have an odd relationship,” explains Austin. “We never fight. We socialize together, vacation together, work together. We just get along really well, and we have more than we ever thought we’d have, so there is nothing to argue about.” He adds, with a laugh, “Plus, I’m the biggest and strongest.”

Jason, Lance and Austin were raised in a flooring family. Their father owned a retail flooring store early in his career. By the time the boys came along, he had transitioned to builder work primarily, and all three boys started out installing. Austin also worked in a retail furniture business prior to opening Calvetta Bros.

Today, Jason oversees the back-end of the business (managing installers, scheduling and purchasing); Lance is the sales manager; and Austin handles marketing.

Between them, the brothers have ten children, ranging in age from 11 to 21. Austin’s daughter Casey, who is 19, has been a spokes-girl in some of the company’s television commercials for 15 years already. And some of the other children work in the family business after school.

Ultimately, the brothers’ goal going forward isn’t significant expansion but sustainability. “Long-term, we might open another store south of Cleveland, but mostly we’re focused on maintaining the business and hopefully passing something along to the kids, those who want to come in,” says Austin.

KNOWING ITS STRENGTHS
With such harmonious family relations, it’s no surprise that the Calvetta brothers run the business mom-and-pop style. While the brothers each have “assigned” tasks, what they all really enjoy is being on the sales floor. Interacting with customers is their core passion in the business, and they resolve any customer issues-no questions asked-whenever they come up. “We put our money where our mouth is and take really good care of our customers,” says Austin.

But that colloquial style doesn’t mean they aren’t serious about the fundamentals of running a business. The Calvetta brothers are committed to advertising. They earmark 5.5% of their gross sales to the venture-75% of that goes to television and the balance is used for local print media and Google pay-per-click. In addition, the company spends about $700 per month on social media. “Social media is a very small part of what we do,” says Austin. “But I believe we get better results from TV and pay-per-click.”

Within its advertising, Calvetta Bros. focuses on advertising the brand, not the price. This strategy-as well as the company’s tag line, “It’s time to fall in love again…with your home”-was conceptualized by Calvetta’s advertising company, Dadada Media of Solon, Ohio. It was Dadada that first suggested putting Casey in the company’s commercials, and, in their years of collaborating, the firm’s owner and Austin have become close friends.

One of Calvetta’s great successes, Austin believes, is that the company doesn’t try to be everything to everyone. “If it’s a big commercial job, we’re not set up for that,” says Austin. “We do no apartment replacement work. We’re most comfortable with residential replacement in the mid- to mid-upper range. That has been a key to our success-we know what we’re good at.” Less than 10% of the company’s total work is commercial.

Primarily, the average home Calvetta’s is servicing is in the $300,000 to $350,000 range-that’s the sweet spot, though the company works in homes on both sides of that range.

Roughly 40% of the company’s sales are in carpet, which is primarily nylon; 35% is hardwood; and ceramic, LVT and laminate account for the balance. The company doesn’t offer ready-made area rugs but does serge and bind broadloom in-house to order.

In addition to these products, Calvetta Bros. offers a range of services for the residential market: carpet cleaning, hardwood refinishing, painting and insurance restoration. It also has a full-service construction division that does kitchen and bath remodels. All these offerings grew out of customer requests, and the Calvetta brothers saying, “We can do that.”

SHARP SHOWROOMS
Calvetta Bros. believes strongly in maintaining a high quality showroom presence. It remodels the locations every 18 to 24 months to make certain that they remain “fresh and updated.” It also has a cleaning lady that maintains them frequently so that they always look sharp. Austin believes that this is a differentiator between Calvetta Bros. and some of its competitors. He notes that his greatest competition isn’t the big boxes but boutique firms like theirs with nice stores.

When the company started out in 1999, its first location in Bedford Heights was a rented 1,200 square foot showroom; within only 18 months, it had doubled that space. Four years later, it expanded to 4,500 square feet. Then, in 2009, Calvetta Bros. bought the land next door to its rented Bedford Heights location and built a 13,000 square foot flagship facility.

The satellite locations have smaller footprints. The Westlake store-which is only six months old and replaced a location in North Royalton- is 4,500 square feet; the Mentor store is 3,000 square feet; and the Macedonia store, which is owned and operated by three of the brothers’ cousins, is 6,000 square feet.

THE CHALLENGE OF SUCCESS
Austin reports that the company’s success is, in some ways, its greatest challenge. “We have a lot of guys who have worked for us for a long time, and they deserve to be compensated for it. But the challenge is, when do you price yourself out of the market? Most of our sales associates have been with us for ten years or more. Everyone keeps making more money, and it’s hard to keep the costs down.”

No doubt one of the reasons that Calvetta Bros. employees stick around is the family-style atmosphere that the brothers nurture. The salespeople wear relaxed attire (nice jeans and shirts), are invited into the brothers’ homes for celebrations and work shoulder-to-shoulder with them on the sales floor. A positive culture in which employees both feel valued and reap the financial rewards of that value goes a long way.

In total, the company has 80 employees, about 50 of which are in-house installers. The company uses an additional 50-ish installers, who prefer to stay independent. “We would rather employ them,” says Austin, “but some don’t want to do that, so we treat them as subs.”

The company also employs interior designers, who bounce from store to store offering design consultation services for clients. Calvetta Bros. does not charge for these services.

Like many successful flooring retailers, the Calvetta brothers are always on the lookout for potential employees. “If I meet someone and think they would be good, I reach out and try to hire them,” says Austin.