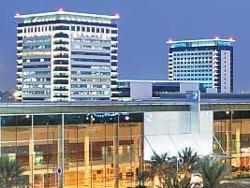 “Hands down, Domotex Middle East, in only its second year, has become the most important international show for flooring in the region. his year, the whole show was on a grander scale, with many major deals completed and important relationships sealed before the close of the first day alone,' said Susanne Klaproth, Director Domotex exhibitions.

"Feedback from new exhibitors indicates that they have met many first-time buyers," said Klaproth. "his proves that there are so many products and services on offer underlining Domotex Middle East's position as the region's most comprehensive flooring event covering all segments of the industry."

"he geographic catchment of the event demonstrates a particularly healthy turnout from the GCC, the Middle East, with , and among the top visitor groups. he turnout from Europe has been particularly strong from the , , and the . We've even seen visitors from as far away as .'

Attendees had an opportunity to see thousands of product lines under one roof, many never seen before in the region and meet first-time exhibitor representatives from , , , , , and . In addition to the country pavilions from , , and the , this year's show also welcomed the country pavilion debuts of , , and he Netherlands who are looking to return in 2008.

Jan van Dijk, Sales Manager, Vifloor Non Wovens BV said 'We made the decision to join the Modint organised Netherlands Pavilion at Domotex Middle East 2007 to familiarise ourselves with the regional market and attempt to join the Emirates in its growth. We have achieved that and more, as we now have a good understanding of the regional market, and have received nothing but high quality decision-makers to our stand, with a positive outcome resulting from most.'

he show proved once again to be a great place to write orders with the majority of the exhibitors already planning to return in 2008. Dubai-based wood flooring specialist Alomi reported excellent returns at the show with more orders to follow.

'his year, as usual, was an excellent show. We have easily made US$1 million dollars on the stand alone during our three days at Domotex Middle East and this is just the tip of the iceberg as we are still in talks with the many, many quality visitors that came to our area. I have collected about 300 business cards and each one is an extraordinary business opportunity to explore,' said Simon Braschler, Middle East Sales Director, Alomi.

Assad Ahrali, Deputy Managing Director of UAE company MEGA Carpets was also upbeat about the shows ability to generate on floor sales and longer term business prospects. 'We have already sold almost 10 containers and it seems this is only the beginning. Also, on our first day, we met with customers who are looking to create long term working relationships with us. We are looking forward to coming back next year.'

'Such is our confidence in the Domotex Middle East brand, which increased our business by fifty per cent following last year's inaugural show, that we quadrupled our 2007 stand size, and plan to book as soon as possible for 2008, as we have updated our knowledge of current industry trends and received an enormous amount of existing and potential clients to our stand from across the region' said Masoud Mahmoudi, General Manager, Fibril, Dubai.

Many international exhibitors commented that Domotex Middle East delivered the right quality of buyers essential to extending their business interests across the .

'I came to Domotex Middle East last year looking for a distributor, and succeeded. his year I came to make contacts with interior designers and architects and things have gone well. he GCC is one of our biggest potential markets and Domotex Middle East has been a good place to make contact with the high profile clients we are looking for,' said Pascal Betten, Commercial Director, MID Carpets, of he Netherlands.

Antonius uschen and Andreas Ridder, Managing Directors of German wood flooring company OSMO who were making their Domotex Middle East debut shared this view and commented 'We have been looking to expand our business in the GCC and came to Dubai in 2006 to see which exhibition we would use as a platform for our products. After looking at major exhibitions held here, we decided to come to Domotex Middle East 2007 because of the quality of visitors it had to offer.'

he 2007 edition of Domotex X Middle East also offered visitors and exhibitors more added value and educational content with the most successful features line-up to date.

'here is a massive demand in the Middle East for qualified flooring specialists and FIA's ambition is to establish a training academy in Dubai to transfer international best practice and standards' according to John Roberts, Director of FIA.

Visitors and exhibitors to the show were also invited to vote for their favourite design from the 11 winning carpets from the prestigious Carpet Design Awards 2007 presented at Domotex  Hannover in January. With a chance to win lunch for two at the world famous Burj Al Arab, the stunning display of some of the most inspired traditional and contemporary hand-made carpets was a run-a-way success. Sebastian Ghandchi, Publisher, HALI and Modern Carpets & extiles Magazines and the driving force behind the awards has confirmed that the design best liked by Domotex Middle East 2007 visitors is "In the Woods" by the company Floor o Heaven, .

Whilst celebrating another highly successful show, Deutsche Messe Hannover, one of the world's top three trade fair companies, which organises Domotex Middle East, said it is now looking to take the event to 'the next level.'

'Industry feedback from independent exhibitor and visitor surveys conducted at the show are extremely positive and we are currently reviewing the recommendations made by the trade to enhance the show experience and ensure that Domotex Middle East continues to reflect the enormous advances the flooring sector is making in the region,' said Klaproth.

Final audited results from the show are being processed and a detailed breakdown of 2007 statistics will be published shortly with the results from the numerous on-site exhibitor and visitor surveys.

he event, which is the largest new-to-market trade show in the history of the Dubai International Convention and Exhibition Centre (DICEC) when launched in 2006, returns to DICEC in 2008 between June 16 -18. Domotex Middle East is held under the patronage of HH Sheikh Ahmed bin Saeed Al Maktoum, President, Department of Civil Aviation, Government of Dubai, Chairman of the Emirates Group and Chairman of the DICEC. he show has the official support of the UAE Contractors Association and the Association of Professional Interior Designers (APID) in the Gulf region.