Domotex Germany 2019: Visitors from all over the world gathered in Hannover, Germany - Feb 2019 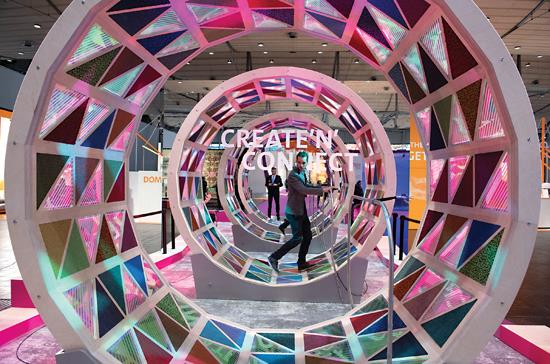 This year, the Domotex show in Hannover, Germany, the world’s largest flooring expo, took place from January 11 to 14. The show is truly massive, with 100 million square feet of exhibit space for over 1,400 exhibitors from more than 60 countries around the world. Every other year, Domotex goes up against the Bau architectural products show in Munich, somewhat reducing traffic, and that was the case this year. Numbers should bounce back for next year’s show, which will run from January 10 to 13.

Some companies choose to attend Bau on the odd years and Domotex on the even years-based purely on managing expenses-but there were still plenty of flooring innovation and fashion trends discussed at this year’s show. The theme was Create ‘N’ Connect and Hall 9 on the south end of the Deutsche Messe fairgrounds served as the focal point to creatively carry that theme to the retailers, wholesalers, designers, producers and craftsmen who attend the show.

One dimension this show excels in-and that others struggle with-is the fashion element. The show works with Renato Turri, publisher of Zurich-based World-Architects.com, who invites interesting architects as speakers and also leads guided tours of the show that are specifically tailored for the design community. Another area where the show stands tall is the booth designs, which are less product displays and more real-world room vignettes. Many of the larger displays also serve food and drinks to their guests, which adds a more social aspect to the exchange between buyer and seller.

Now in its 31st year, Domotex started as a rug and carpet show but has evolved to fill 11 buildings with every flooring category except ceramic and stone. Any and all products used to manufacture and install flooring are also on display. It should be no surprise to learn that Hall 12-devoted to laminate, LVT and multilayered flooring-was abuzz with activity, since these products represent the bulk of the global growth in flooring. Several companies, like Coretec and Firmfit, used this year’s show to debut their mineral core multilayered flooring products, topped with either a melamine wear surface or a real wood veneer and touted as waterproof. These products have been refined and re-engineered to solve issues including temperature-related dimensional stability, acoustical issues and surface scratches.

Another trend is fabric floors, which use denim or woven vinyl as a wear surface with a thick cushion backing. We also saw a lot of flooring products specifically modified to be used as wall coverings. These products are lighter and less costly since, as wallcoverings, they don’t have to hold up to foot traffic. I4F has recently added several patents to its portfolio related to dematerialization and wall mounting systems for flooring.

We also learned that area rug sales have seen a resurgence as more consumers decide to cover their new hard surface floor with a fashionable and quieting second layer. We found it interesting that we had to travel to Germany to learn that Chattanooga-based Card Monroe Corporation is launching a new tufting technology, called Tailored Loop, which gives carpet mills individual loop control, enabling them tighter texture definition. This patented innovation allows mills to produce carpets and rugs with a Wilton woven look, but at tufting speeds.

Oerlikon was also at the show, rolling out its latest BCF-S8 three-end bulk continuous filament (BCF) extrusion equipment. In addition to increased speeds, this upgrade to the S+ is capable of handling close to 700 filaments (versus 400 before). At this stage, the equipment works with polyester and polypropylene mono-color, but tri-color and nylon capability will be available in a few months.

Several exhibitors came to Germany to promote their VR and digital visualization tools. These technologies have continued to evolve and, according to Leap Tools, consumers can now take a cell phone picture of their room and then use the Roomvo website to change out the flooring. There’s just one catch-you have to give them your email address.