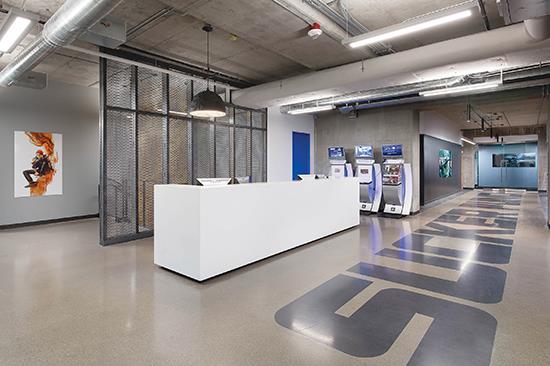 Sucker Punch Productions, a prominent video game developer and creator of the popular games Infamous and Sly Cooper, was eager to find a new home custom-built to its needs. Having spent the previous four years “making rooms work” in a second-generation space with no personalization, the company was ready for a space that reflected its personality. Trammell Crow’s 929 Office Tower in Bellevue, Washington provided the perfect 30,000-square-foot, multi-story canvas for a space that is at once distinguished yet edgy, polished yet dramatic. JPC Architects, in tandem with Sucker Punch, created a dynamic solution that both reflects Sucker Punch’s creative energy and addresses its programmatic needs.

DYNAMIC COLOR ROLE-PLAY
Sonia Dociu Jackson, director of operations at Sucker Punch, described her vision for the company’s new digs as “a record studio vibe-a space that shares those inspirational elements and embodies that triumphant prestige, [one that] still has an edge but more sophisticated.”

Design inspiration came directly from Sucker Punch’s video game artwork, embodying the concepts of color intensity, texture and opacity. Raw materials, eclectic salvaged elements and bright punches of color were balanced by clean lines-both on the floor and ceiling-and orthogonal spaces that, while well defined by graphics and flooring edges, were visually open to one another. Saturated color was used to indicate different space concepts. For instance, fluorescent yellow was used to indicate whole-office collaboration, while dark blue was used for team collaboration zones. Intense color was also used on custom millwork pieces, creating visual cues that satisfied the principles of wayfinding while providing optical delight. The result is a vivid reflection of Sucker Punch’s unique personality and allows each department to work efficiently and comfortably.

DESIGN ORIGIN STORY
JPC’s design team and Sucker Punch both felt strongly that the reception and adjacent breakroom area should have sealed concrete flooring, which is well-suited to high-traffic areas, to provide ease of maintenance and longevity. The earthy concrete finish also symbolized Sucker Punch’s unassuming origins while expressing the beauty of structure in its raw form. This was the foundation of a waiting area that is inviting and straightforward, allowing the simplicity of the materials to shine while maintaining an uncluttered feel.

Alignment and polish were very important considerations in the design process. The custom Sucker Punch floor graphic-which utilizes a custom font created in-house by Sucker Punch and applied by Flooring Solutions using Scofield Formula One Liquid Dye Concentrate-was designed to take center stage, pulling the guest from the elevators toward the reception desk. Those two elements aligned with the open frame mesh wall that separates reception from the internal stair connecting the lower floor flex space. The waiting area also provided a location for standing game consoles that guests can play at their leisure, further providing an interactive connection to their roots.

The sealed concrete flooring was continued into the adjacent break room, which was designed as the heart of the office. The location for this room was selected because it maximized daylight and views to the city, and because it was located far enough away from work areas so as not to cause auditory disruption. Custom dining booths, which incorporated strand board with high gloss laminate sides and durable fluorescent yellow quilted upholstery, were designed with Sucker Punch’s existing plants in mind and included planters.

The break room was designed not just for dining, but also for staff to utilize as an informal meeting space. To reinforce the relaxed feel of the space, the team created area rugs using Flor’s Reoriented, Nizhoni Patchwork and Chenille Charade commercial carpet tiles, bordered with Flor’s In The Deep series in Black. These rugs were placed underneath salvaged dining tables from the company’s old office and surrounded by a mix of contract and residential dining chairs, creating an overall effect of flexibility and comfort.

SOFT SPACE SERIES
The smooth, high polish of the entry and break area was complemented by the saturation and texture of adjacent soft spaces. All of the carpet used in the open office areas came from Bentley Mills and was installed using an adhesive-free hook and loop system for ease of future modification and to reduce impact of future decommissioning.

Bentley Mills’ philosophy of luxury, quality and sustainability aligned with the overall project goals, and it didn’t hurt that it was able to provide a custom fluorescent yellow carpet tile-from its Tech UpD8 series-at no additional cost. This vivid yellow color was used to indicate spaces intended for whole-office collaboration. Saturated colors like this played an important role throughout the open office.

In specialized areas like the audio recording and editing rooms, using acoustically absorbent carpet was the logical choice. For this, Patcraft’s Experience Modular series in Solution with CushionWorx, a specially designed sound absorption backing, was used to ensure that the rooms exceeded their auditory programmatic requirements.

Texture played a large role in designing both the walls and the flooring. The selected textures emulate intensity of movement in a given zone; high-traffic circulation areas were populated by highly textured finishes, while sitting or collaboration areas received solid patterns. Movement in the carpet was implied by installing it at a 45-degree angle, giving the feeling of motion and propelling the user through the space, while 90-degree angles signified landing zones and places for collaboration and pause. Team neighborhoods were separated architecturally by full-height walls with partial glazing and relocated plywood partial-height end panels, and each neighborhood was given multiple landing zones for workstations or seating areas designated by alternating monolithic carpet tiles.

THE END GAME
Sucker Punch Production’s need for a home that represented its unique company culture was realized in this dynamic solution. Today, employees enjoy a space that was designed with their specific requirements and built to enhance their work-and gaming-experiences. As Sly Cooper once said, “It’s all for one and one for all, or the team doesn’t work.”