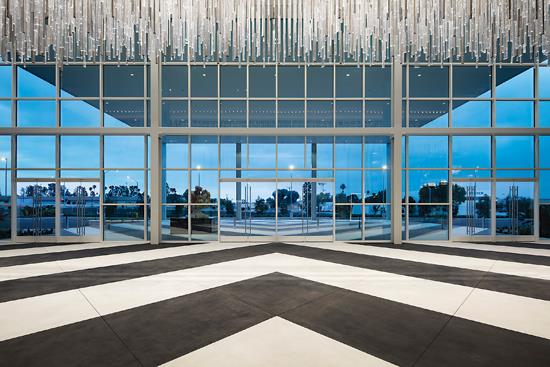 It is a classic story; a legend falls on hard times and then shows the grit and savvy to rise against the odds. While the luster and glamour may have been diminished, the legend knows how to be relevant in a new age and how to create a distinctive edge by employing an insider’s knowledge of how the “game is played.” Such is the story of Hollywood Park Casino (HPC) and the alterations that have positioned the property as an integral part in the redefining of Inglewood, California.

Throughout the ’30s, ’40s and into the ’50s, Hollywood Park Racetrack was the place to see and be seen and a hotspot for celebrity elite, such as Cary Grant, Errol Flynn, Joan Crawford, Liz Taylor, Rita Hayworth and Tony Curtis. As horseracing began to diminish in popularity, the property diversified, and in 1994 the Hollywood Park Casino was opened. Eventually, in 2013, active operations at the racetrack were suspended permanently. Through the ebb and flow of time, this prime piece of Inglewood real estate became one of the largest underdeveloped parcels of land in the greater Los Angeles area.

In 2014, as part of a larger vision for the 238-acre site, JCJ Architecture was selected by commercial real estate development firm Wilson Meany to undertake design for a vital new Hollywood Park Casino, one that would take its place as part of a dynamic mixed use and master-planned development that included housing, hotel, retail, restaurant, office and open space. As experts in the design of versatile gaming environments, Wilson Meany charged the JCJ team with design of the new and appropriately named Cary Grant Pavilion.

LET THE CONCEPT BE YOUR GUIDE
The owner’s team looked to JCJ to develop a concept that would be distinctive, functional and cohesive. Inspiration came from the heyday of the Hollywood Park and the glamor and fashion of the time-women’s refined and feminine apparel featuring high-contrasting patterns and unique cuts juxtaposed with men’s clean lines and tailored ensembles. How this inspiration took shape can be seen in both the lobby and gaming floor.

The lobby was designed with a large black and white concrete pattern, drawing on the motifs found in women’s skirts and the structured geometry of men’s suits. Because the concrete flooring began outside at the porte-cochere and made its way continuously into the lobby, it was crucial to have a flooring surface that was strong, highly durable and slip resistant. The design team originally looked at tile as an option but weren’t able to find any that would handle the weight of motor vehicles or come in the highly contrasted colors the team desired.

The pattern was not created with a stained concrete topcoat. Instead, white sand was brought in to be layered into the concrete. Mica was added into the black sand and “pixie dust” sparkle grain into the white to create a hint of glitter and glamour. The team used pixie dust, despite the added cost, because its transparency did not darken or change the brightness of the white tone. Once the dramatic flooring was determined, the design team layered contrasting effects with lobby lighting and wall surfaces.

As a counterpoint to the bold patterns on the floor, a 74’ chandelier was used to create a focal point. Mimicking the softness of women’s blouses, this fixture frames the upper edge of the entry and amplifies the floor’s sparkling surface. The surrounding walls were highly reflective, and the cladding for the restaurant utilized a similar pattern to the floor in color and smaller pieces. The flooring became the vehicle to tie the spaces together and create a bold and dramatic entry experience.

On the main gaming floor, the design team utilized a Brintons custom-colored Axminster carpet from the Stacy Garcia Speakeasy collection. The carpet features a structured diamond pattern behind spinning lines that create circles in the foreground. In this pattern the team imagined the circles as expressing the action of a woman’s classic ’40s skirt twirling with a man’s suit, to be like a dance between a man and woman. In fact, when the owner’s graphic designer consultant independently reviewed JCJ’s finish boards, they utilized the carpet pattern as part of their inspiration for the HPC logo. In the pattern, they saw these lines as a spinning poker chip. It was exciting to see firsthand how multiple individuals can create different stories from the same experience.

THE BALANCING ACT
In deciding whether to utilize hard or soft flooring surfaces, decisions were primarily based on maintenance and comfort. Hard surfaces were used in travel paths and around food for durability and easy cleanup. In the bar and food service areas, the team recommended tile. While it does not have the preferred acoustical properties, its ease of cleanup far outweighs its disadvantages for the owner. To manage sound, acoustical ceiling panels were utilized and batting was hidden under all the dining tables.

HPC features 125 gaming tables. Unlike gaming floors made up of slot machines, poker players are more aware of the surrounding volume and tend to like a quiet environment. By utilizing carpet at all gaming tables, the team provided better sound absorption and under-foot comfort. Generally, for these types of environments, Axminister carpet is specified, so that if a cigarette is dropped on the carpet, it will just leave a little char mark that can be rubbed out, versus other carpet yarns that leave burn streaks.

Emser’s Action tile in a natural wood-look was chosen for the raised platforms surrounding the lounge. This choice of floorcovering paired with the light fixtures, the red tufted wall and the feature back bar that wraps up onto the gaming floor became the focal point. Stone Source’s Lignes Karu, a black, textured wood-look tile, was used on the floor under the couches and soft chairs. This did double duty; it allowed the other areas to stand out and is easy to maintain.

Once the client has approved the overall concept, it’s important to have an idea of what features and areas need to pop. Frequently, the carpet is the largest canvas for art, color and interest, so makes sense to use it as a feature.