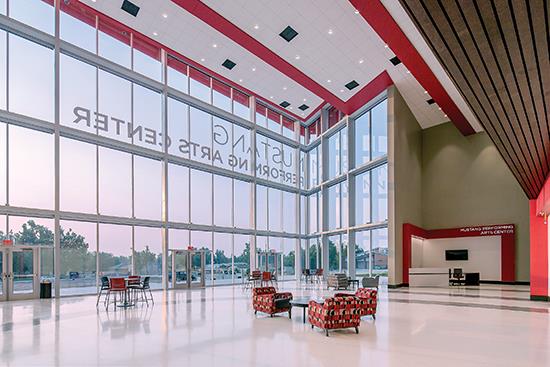 Oklahoma has a long history of boom and bust. Hundreds of towns can attribute their founding to an oil boom that brought thousands together to form a new community. Those days are largely gone, but places like Oklahoma City remain. While Mustang, located 20 miles outside Oklahoma City, has largely been a rural farming community, the city is now seeing a boom in growth. The suburb has three commodities to offer: land to be developed, strong community leadership and a top-tier school system. With recent student growth of roughly 450 kids annually, a new performing arts center was needed to support the school district’s growing fine arts community.

THE PRELUDE
The existing auditorium at Mustang High School was built in 1970 and was not sized to handle the number of students and arts programs in the district today. Mustang Public Schools’ desire to help lead students on a variety of career paths within the performing arts industry led the desire to build a new center for the arts, but the district also wanted a space to welcome and share with the community. The architecture firm selected for the project, MA+ Architecture, partnered with globally recognized theater design firm Schuler-Shook to create a space that would meet the school’s and community’s needs for decades to come.

Recognized as one of two Best Communities for Music Education within the state of Oklahoma by the National Association of Music Merchants, Mustang Public Schools’ performing arts programs are among the best in the nation. Thanks to a community bond issue in 2017 that paved the way for this new facility, the district may now better nurture and showcase student talent, while creating lasting community connections.

For the design team, a performing arts center offered a unique opportunity. The overall design needed to be functionally versatile in order to meet the goals of the stakeholders, but it also needed to be aesthetically pleasing.

THE MAIN ACT
Upon entering the main lobby, visitors will first notice the sparkling of the custom, poured-in-place white terrazzo flooring at their feet, then the walls featuring student artwork, recessed below a wooden feature wall with strips of RGBW lights. Terrazzo was an ideal choice not only for its aesthetic and timeless qualities, but also because of its performance; under high-traffic conditions, it is unmatched. The district has used poured-in-place terrazzo in other high-traffic buildings and has been pleased with the maintenance and durability of the material, so when MA+ proposed doing terrazzo in the theater’s main lobbies, the decision-makers were immediately on board. Accenting the flooring’s white field color, grey ribbons lead guests past the student art gallery and into the performance hall lobby, where a stage functions as a platform for solo or small ensemble performances. With its smaller footprint, the performance hall lobby provides a more intimate setting.

From the performance hall lobby, guests are led up a grand staircase with matching terrazzo and glass rails into the performance hall. Here, warm, rich wood tones are met with a juxtaposition of modern design featuring sharp angles and RGBW lights. This space, which is the heart of the building, seats 1,500 guests and features a full orchestra pit with a motorized platform, an acoustical shell, an adjustable proscenium opening, and industry-leading lighting and audio-visual equipment. Milliken carpet was used for the aisles for its acoustics and standard cushion back. With the stage being the focus of attention, the carpet includes small red stripes that subtly tie back to school’s colors without overwhelming the scene. Milliken’s Remix Remastered collection offers easy customization, and the Bass Line style provides a contemporary backdrop that doesn’t distract. Meanwhile, stained concrete runs under the seating for easy cleanup.

The design team understood that the stage flooring was vital to the overall function of the entire facility. To ensure perfect functionality and longevity, Plyron high-performance laminated flooring over a sleeper system was selected. If the Plyron becomes damaged, the school can simply flip it over, thanks to dual-finished sides. The sleeper system is similar to the type often found in athletic facilities, such as basketball arenas. This allows for the bounce needed to prevent injuries to the performers.

The separate black-box theater creates a flexible, intimate performance experience. This space allows for traditional, three-quarter or in-the-round arrangements and is complete with a catwalk and a lighting and sound booth. The same flooring system used on the main stage was also used in the black-box theater. The slab was recessed to accommodate the thickness of the system, while allowing for large scenes to be rolled directly in due to the lack of a transition. The room is lined with curtains to create true flexibility for the layout of the space and acoustics.

SUPPORTING ROLE
The building also houses vocal performance classrooms, with larger classrooms than before. Additional practice rooms were added, as well as a music storage room. The smaller of the vocal classrooms will be used for show choir, in which the students dance while they sing. Because of this, Tarkett’s Omnisports 7.1mm gym flooring was selected for its force-reduction, thereby reducing the injury risk for performers.

Classrooms and corridors utilize Kährs’ Upofloor Quartz composite tile, durable enough to withstand up to 3,500 psi, which was important to the longevity of the building, where large, heavy sets are often moved between the scene shop and the two theaters. The material is also easy to clean. The building is supported by a catering kitchen, large costume storage, laundry, dressing rooms and rehearsal spaces.

No performance venue would be complete without an abundance of restrooms. Though they are an essential element, it was important to include school colors throughout to offer a sense of personalization. The restrooms needed to fit the overall aesthetic of the rest of the building, while keeping the budget in mind. Emser’s Borigni tile was selected for the floor, its Quest adorns the walls, and its Prime Cereja is the red tile behind the sinks. Emser Prime is a great source when seeking to match a specific school color.