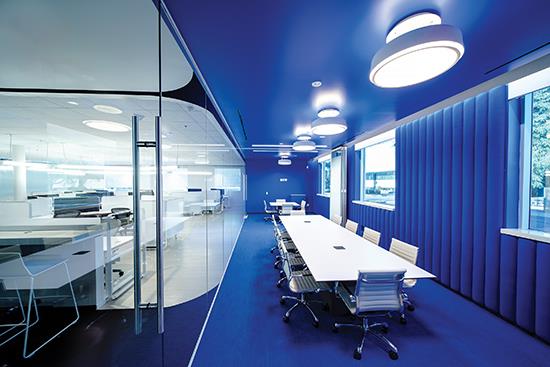 Founded in 1986, DocMagic in Torrance, California is one of the top mortgage technology companies in the U.S., and it pioneered technology for the generation of mortgage documents. As a pillar in the mortgage industry for more than 30 years, DocMagic has set itself apart by challenging the status quo and creating breakthrough innovations to ease and enhance the cumbersome process of transaction and mortgage paperwork.

After two decades of residing in the same building, DocMagic purchased a new two-story building and started the process of designing its new headquarters. Initially, the company began with a complete interior renovation of the upper level, and then later renovated the lower level to meet the company’s growing needs.

For the project, the firm brought in RA-DA, based in Hollywood, California, which sought to introduce DocMagic to new and current philosophies toward workspace design with a goal of enhancing the day-to-day experience, activities and efficiencies, using flooring as a tool to achieve these goals. In addition to functional aspirations, RA-DA started to investigate visual and architectural theories that could communicate the core of the business. This was an opportunity to brand the company’s environment and reflect its standing as a leader in this technology space.

PLAYING WITH LIGHT
RA-DA started by exploring different visual methods of creating a space that would communicate the transfer of information and at the same time engender a “virtual” nature. The resulting design achieved this obscure aspiration with the unique play of light and careful sculpting of passageways that connect the open workspaces. Light corridors were crafted of translucent walls that would catch diffuse lines of light from linear tubes arranged in a variety of patterns behind them.

RA-DA defined zones within the floor plate as either “places of congregation” or “places of movement” wrapping around general work zones. All “places of congregation” were articulated by bright colors, using monochromatic carpet tiles to mark an area. In the original design, carpet from Tarkett’s Tandus Centiva was used, but in the second phase, RA-DA brought in Fashion& from Bentley Mills’ Modulyss line. In contrast, pristine and minimal light corridors define the “places of movement,” which are outfitted with a ceramic tile from the Laminam by Crossville line. These two approaches to flooring also impacted the acoustical impression of the two types of spaces. Congregation areas were quieted, whereas movement areas are exaggerated with a staccato pulse that mimics the light patterns in the walls.

DEFINING SPACE
This aesthetic and design strategy was carried over into phase two of the renovation when RA-DA took on the complete revamp of the lower level. Where a series of new types of meeting spaces were created in phase one, phase two allowed the design team to expand on those and continue the use of bold colors to mark meeting spaces and areas of congregation. The team took existing underutilized spaces and turned them into a series of unique functions such as webinar recording rooms, video conferencing rooms, solo study spaces and Wi-Fi counters to satisfy functions that existed but had no home.

The flooring concept was also extended to this phase and although the acoustically quiet and vibrant rules remained, new flooring materials were introduced. Matching the existing tile turned out to be impossible as the thin tiles were no longer available and were relegated to wall installations only. This gave the team the opportunity to introduce alternate hard surfaces that would work with the tile. It turned out that these would add a much desired individuality to the spaces. A terrazzo floor was used for the downstairs pantry and extended into the library room, providing a seamless connection between the two spaces, and Carlisle Wide Plank Floors’ Aquila hardwood was introduced in the software development department, giving it an identity of its own.

Each zone features its own branded color. Finding the right colors for this color blocking approach was tricky and had to work with the branding of the company. All the carpet tile was sourced from Modulyss’ Fashion&, which had an array of bold primary colors and good pinks and purples that were important for the DocMagic branding palette.

Two expanding departments were moved downstairs and given an upgraded and personalized space. These were the IT and the software development groups, both with very different workflows and needs. IT did not require too much collaboration space but did need access to all the data created by the company to remain constantly aware of data output of the business. Software Development needed quick meetup spaces and whiteboards throughout. Both were very important departments and at the core of the business.

The new IT room boasts tiered seating and a 20’-wide media wall allowing the team to keep track of important company data. This space has been renamed “Mission Control” and resembles a NASA control deck. The software development team sits in a cluster of custom hexagonal desks, giving them a unique, untraditional environment. Custom light fixtures following the hexagonal desk arrangement and the introduction of wood flooring-again using Aquila from Carlisle Wide Plank Floors-makes this space unique.

Flanking this space are a series of bright blue conference rooms and writable walls allowing quick meetings and an efficiency to the workflow.

The existing pantry was expanded to house a central “library” that could provide either additional workspace for staff or guests or even open up into the main pantry to create a large hosting or townhall feature. This space is separated from the pantry with four oversized, automated glass pivot doors. Here, the terrazzo flooring gives a sense of visual continuity. A bright orange carpeted island in the center using Fashion& was installed under the oversized counter, accentuating the library table and establishing it as a floating element within that space.

The final result is a two-story space that is knitted together by an overarching approach of color blocking and a story of movement. Both phases are imperceptible and act as one complete project.