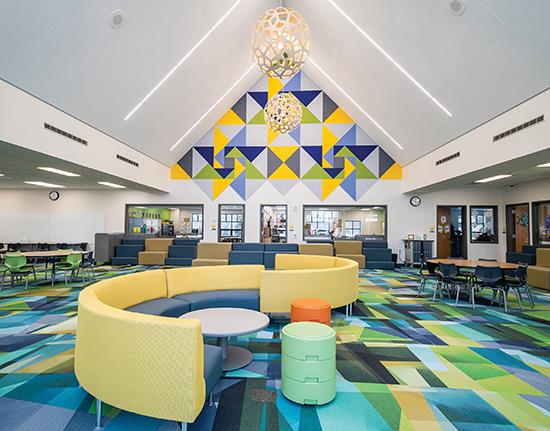 By Nicholas Kent and Laura Frydach

Swallow School, located in Hartland, Wisconsin, has been a school longer than Wisconsin has been a state. As the surrounding community has evolved over the 178 years since the school’s founding, so too has the building. The facility had become a hodgepodge of additions and finishes over the years, which the team at Plunkett Raysich Architects (PRA) set out to rectify through its design for an extensive renovation and modernization that pays tribute to the school’s history while rooting it in the present and simultaneously preparing it for the future. The award-winning firm has extensive experience in crafting specialized K-12 environments in Wisconsin, where PRA was founded and is headquartered.

THE BUILDING
Originally established as a one-room schoolhouse across from its current location, Swallow School moved into a brick structure in 1895. Though this served as the keystone for the facility’s continued additions, it no longer served as the heart of the school, instead anchoring a museum of sorts showcasing the school’s evolution over nearly two centuries. In light of the disjointed buildings’ numerous functional and maintenance issues, a brand-new 9,000-square-foot wing was planned as a replacement for the two oldest portions of the building, which, combined, were roughly half that size. Connected to the school’s more modern additions, its construction called for a complete rethinking of the entire space.

Reinventing and unifying the complete facility was one of PRA’s main objectives. The challenge was to do so in a way that honors the school’s long history, while ensuring the new building can stand the test of time. Instead of turning to trendy finishes, the team drew inspiration from the palette, shapes and forms already in place throughout the building-some of which PRA’s designers had selected for previous phases of the facility’s transition to more modern times.

In the 1990s, the Swallow School community experienced a boom in housing construction, resulting in dramatic student enrollment increases. By the turn of this century, however, Swallow School’s population had started to see declining enrollment as those students moved up in grade level; yet, their parents remained in their homes. In order to ensure the school could keep pace with the community in the years to come, several strategic projects were undertaken with PRA at the helm. The firm was retained to develop a master plan for the school and its grounds that would address aging infrastructure, changing enrollment and changing pedagogy, and targeted initial projects were prioritized. Along with functional changes to the front office and entrance areas, a new Discovery Lab was built and outfitted with robotics and 3D printers. And the library was renovated to meet the needs of today’s educational methods, taking it from a single space to one with four distinct areas outfitted for different types of learning.

The school now welcomes approximately 440 students in kindergarten through eighth grade. To accommodate an increasingly individualized student experience, the design team decided to reorganize all of the classrooms as part of the culminating renovation, changing the way the spaces and students relate to each other by creating a “neighborhood” for each grade.

THE PROCESS
Before the buildout could begin, the general idea first had to be brought to the community for a vote. With those early projects illustrating the possibilities and payoff, voters approved the team’s concept for the new building in late 2018, and the designers were then able to begin plotting out the formal footprint and finishes.

Throughout the entire design process, the team collaborated closely with the project’s numerous stakeholders-staff, school board members, students, parents and caregivers, alumni, even community members with no true ties to the school. In Wisconsin, capital expenditures like Swallow School’s construction project are put to a referendum, so it was important that the project have buy-in from a broad cross-section of the district. Before each step in the process, the design team compiled mock-ups of their various suggestions and invited the public to weigh in.

It was a multi-year visioning process, during which the team also had to contend with a pandemic, supply chain issues and escalating costs. Over the four years between the project’s approval and completion, the team worked with the community to determine window placement, flooring materials and everything in between. Even the cubbies that serve as drop zones for students’ belongings went before the public for input based on the team’s renderings of several different options.

Utilizing Enscape digital software, the team uploaded its curated selections to iPads, which students, staff and community members could then pan around the space in question to see it virtually outfitted with the various potential finishes.

THE FINISHES
In order to contend with the snowy climate, the team chose VCT from Armstrong for the entryways and main circulation areas, transitioning to carpet tile from Milliken to offer a sense of comfort in the classrooms and denote areas for collaboration while providing durability. Separating each grade’s two core classrooms are co-working spaces, signified by the use of different carpet tile. While the muted soft surface in the classrooms provides a quiet space for students to learn and even sprawl out on the floor if that’s how they learn best, the energizing mosaic pattern of the intersecting carpet tile offers a visual cue that it is a shared space where collaboration is welcome, a theme manifested via intentional choices throughout the rest of the building, as well. For example, wood-grain desktops indicate personal use, while furniture topped with grey tones is reserved for collaborative spaces.

The VCT ultimately selected by the team has a weathered wood tone that recalls an old schoolhouse, while its herringbone installation riffs off of one of the favorite carpet tile selections, which ultimately lost the popular vote. The pattern, mirrored in the common areas’ final soft surface selection, also helps mask the hallways’ jogging angles and serves as a thematic homage to farmhouse quilts, a tribute to the building’s longevity and location.

Like a quilt, the overall design came together holistically, each component building off of and complementing the rest while maintaining its own identity. With some of the furniture and other finishes already in place, the designers looked through hundreds of carpet tile samples in order to find the perfect tone and base to serve as an accent. They were drawn to Milliken because of the vibrant color options and the standard cushion back, which offers underfoot comfort and performs well in new construction since it allows moisture to escape through the carpet tile. After narrowing it down to two options for the main collaborative space-identified early on as part of an overarching need for more flexible and open areas-Milliken’s Edge Lit won a stakeholder poll by a 70/30 vote.

Anchoring the rest of the soft surface selections, the bold, contemporary design offers a fresh perspective on the diamond pattern traditionally found in barn quilts that were a common element in the Wisconsin countryside, and the cool color palette serves both studious and more creative environments. Grey-toned Laylines carpet tile from Milliken was used in the main area of the classrooms, with a contrasting runway in blue helping students easily navigate the space.

Secondary flooring finishes include Nuflor LVT, used in the music room because of its particular acoustical properties and inherent durability, and poured epoxy in the restrooms for its ease of maintenance and elimination of grout joints.

THE FUTURE
In a visual place of prominence within the new collaboration space is a structural steel beam signed when construction started in October 2019 by everyone with ties to the project-students, faculty, school board members, designers and the construction team. Bridging past, present and future, it symbolizes the school’s continued path and the process undertaken to get it to where it is today.

While the building feels brand-new in many regards, the students who roam its halls are reminded of its storied history. In the corner of the lobby sits a still-functioning wood stove, and in a display case are several handwritten Board of Education logbooks dating back to the 19th century. The surrounding walls are flanked with historic stones and Cream City brick, a pale brick made from clay found around the Milwaukee area. Both were salvaged from the oldest areas of the school during demolition, along with the original school bell, which again hangs above the main entrance.

The blank walls await the final piece of the puzzle, digitized memorabilia from the past 178 years, including two notebooks used during the board meeting when locals decided to establish the school.