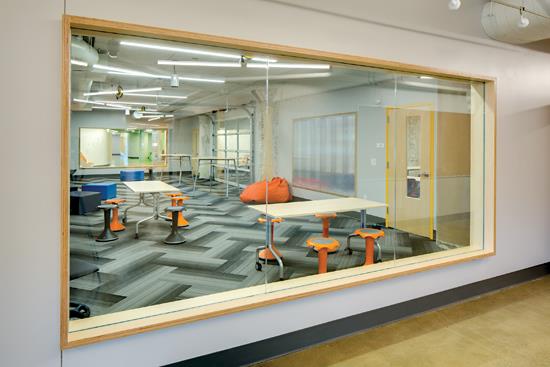 Many who enter Crosstown High School for the first time have the same reaction: “Wow, this isn’t what my high school looked like!” This is the response the interior designers and architects of ANF Architects were hoping for when designing the newly formed charter school in Memphis, Tennessee.

The school is located on portions of the first, fourth and fifth floors of Crosstown Concourse, a recently renovated one-million-square-foot “vertical village,” including retail stores, restaurants, corporate and non-profit office tenants, and multifamily housing units. The Art Deco-style behemoth, constructed in 1927, was originally a Sears catalog distribution center and was recently transformed after standing vacant for almost 20 years. This revived and repurposed architectural gem proved to be the perfect space for a newly established charter school with the vision to create a completely reimagined classroom.

A DIFFERENT VISION
Crosstown’s founders envisioned their school as something completely different from traditional schools of the past, often windowless with buzzing fluorescent lights and long narrow corridors filled with metal lockers. While the traditional school model of the past century was based on neat rows of students in individual desks facing a blackboard, Crosstown High would be a more flexible, fluid, interactive and technology-driven environment for students.

In selecting a color palette, designers veered away from standard school colors like royal blue, purple, maroon and hunter green. Instead, the team selected vibrant energetic shades of orange, blue, lime green and yellow. In an effort to avoid an overabundance of color more common in primary schools, accent colors were focused strategically at “basecamps”-large flex spaces with a mix of movable furniture for lounging or group work-flanked by classrooms on each side. Because there are eight basecamps for students (two for each grade), it made sense to color code each for wayfinding purposes. The four main accent colors were subdivided into darker and lighter shades so that each basecamp would have its own identifier. Just outside the door of the basecamps, existing concrete floors received a large band of Tnemec epoxy paint specific to the color code of that basecamp. The color continues up the wall to the ceiling and flows down the opposite wall, creating a color immersion that visually pulls the user into the space.

UTILITY AND DESIGN
In addition to basecamps and classrooms, a large portion of the overall floor plan was devoted to open collaborative spaces called Learning Commons with tables and chairs on casters for easy reconfigurability. However, large open spaces need sound absorption solutions, and flooring finish selection was greatly impacted by this.

In areas where students would congregate and work on group projects, J+J’s Kinetex modular carpet was selected not only for sound absorption but also durability. The linearity of the Umbra Stripe pattern provided an interesting contrast to the curved walls and meandering corridors throughout the space. The same product in a custom version with no color accents was used at all basecamps, classrooms and staff rooms. This was the perfect backdrop for colorful furniture specified in these areas. At basecamps and classrooms, a herringbone install pattern was used while at other areas the carpet was installed at a 45-degree angle. Originally, carpet was not to be used in eating areas, but the client was so confident in the stain resistance and cleanability of the product that it was added to a café area on the fourth floor when it was discovered there would be a corporate office directly below.

OPEN DESIGN
One can sense the openness of the design upon entering the fourth-floor main entrance, which is adjacent to the towering main atrium of the building. Interior floor-to-ceiling windows provide views through a light-filled secondary atrium to classrooms and group study spaces on the other side of the school and also into adjacent tenant spaces. This high visibility fosters connectivity between not only students and teachers within the school but also with the rest of the Crosstown Concourse community. Leading from the entrance into the learning spaces are curved walls and corridors that create visual movement and reinforce the concept of flexibility and fluidity. To further the concept of connection, only a small handful of rooms are completely enclosed with no views outside. Windows in each room have varying degrees of opacity to provide more or less visual separation depending on the type of room.

Great care was taken during design to uncover and highlight original interior architectural elements. Oversized concrete columns were left exposed, as were much of the original brick cladding perimeter walls. Concrete flooring was left uncovered in main circulation areas, receiving only a buff and polish. In an effort to connect the fourth and fifth floors visually while also providing a central congregating space, designers made the decision to cut through the concrete floor plate and create a learning stair. This would serve as a place for hanging out during lunch or gathering for a presentation or performance by fellow students. Aesthetically, this provided a space to inject some warmth, with all surfaces of the steps covered in a light maple veneer contrasting with the colder, predominantly concrete surfaces.

In August of this year, the first class of ninth graders walked through the doors of their new school-a space full of light and vibrant colors designed to inspire fresh new ideas for Memphis’ next generation.