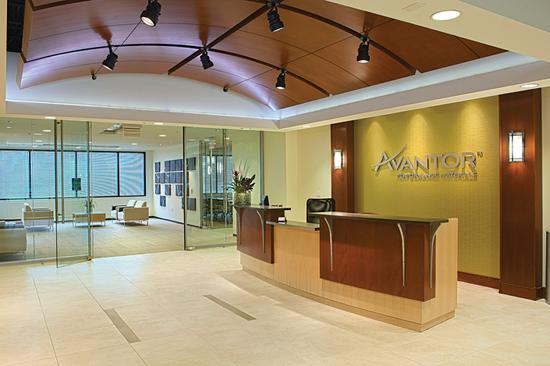 From the beginning, it was clear to DesignPoint Inc. that Avantor Performance Materials had some specific goals it wanted to accomplish in relocating its corporate headquarters. The firm needed to combine multiple office locations to get all employees under one roof, but still keep them organized into individual departments.

The existing facility left much to be desired, with cinderblock walls, little natural light and most of the people working in private offices. It was not exactly the type of facility that was going to attract the young, tech-savvy employees the firm was looking for. It was clear to Avantor’s team that they needed a more modern, collaborative workspace that reflected the firm’s place as a global manufacturer of performance materials and chemicals for leading-edge pharmaceutical, biopharmaceutical, laboratory, research and electronics applications.

The first step was to select the right location, which brought them to a Class A office building in Center Valley, Pennsylvania. The building is a prime location with excellent access to major highways, nearby high-end retail and restaurants, and golf-course views. At first, the team seemed to think they wanted their new space to be somewhat understated. However, all that changed following a tour of some recently completed office spaces as part of the Conceptual Design Phase. Immediately, Avantor’s leadership became receptive to the new ideas and concepts being used in state-of-the-art corporate interiors. It is always exciting to work with a client that is open to utilizing new concepts for a modern office environment. Through the design process the team came to understand that this new way of thinking about the workplace was not only what they wanted, but what Avantor needed to be competitive in recruiting the brightest talent.

The idea of the open-plan office was introduced with a focus on getting people out of closed-up offices and into workstations with lower panel heights. The new facility offered fantastic views all around the building; therefore, many of the open office areas were placed around the perimeter. Of course, private offices and areas for meetings could not be eliminated. It was decided that all perimeter rooms would have glass fronts so everyone could benefit from the natural light.

One other idea Avantor’s leadership wanted to capitalize on was collaborative spaces. Yes, they had traditional conference rooms, but what about the non-traditional gathering spaces we had seen on the inspirational tours? The team thought that such gathering spaces were necessary for cultivating the idea-sharing and collaboration they wanted their employees to engage in. The facility has several types of non-traditional gathering spaces on each floor in different sizes and configurations. Some even incorporate media-integrated furniture, which allows users to meet and share ideas in real time. In conjunction with these collaborative areas were some break areas and gathering places where employees could socialize or perhaps even meet over a cup of coffee to share ideas. These incorporated both traditional dining height seating and counter areas for standing conversation.

Providing amenities to its current employees and for attracting prospective employees was important to Avantor, so a well-appointed gym and locker facility was provided. Another consideration, with this being the global headquarters, was that there be a large space to house its extensive data/server equipment, which services its entire operation.

On any project, our approach is usually to begin with a large color palette made up of a range of dark to light neutral hues with several accents, typically with more colors in the scheme than would ever be worked with, but it’s a good idea to have a broad range to pull from when getting materials together. In this case, the client’s preference was for a mostly neutral color scheme. DesignPoint suggested that the accent colors to be used for creating interest should also have a strong relationship to its brand. It was very important that the new design be reflective of Avantor’s brand philosophy and so, to make sure it was on track, DesignPoint worked closely with the company’s director of corporate communications. Using Avantor’s brand guidelines, DesignPoint was able to select colors that would complement its marketing materials without matching them. The idea was for the brand identity to be visible but subtle and not necessarily in your face around every corner.

Because the firm mainly occupies the upper floors of the building, the reception desk is located in the building’s second floor elevator lobby. For durability to cope with the high traffic, ceramic tile was used in this space, as well as in the third floor elevator lobby. Fiora, a modern large-format tile from Casa Dolce Casa was selected, and smaller stainless steel plank tiles were inserted for accents. This tied into the metal accents on the custom reception desk as well as other metal accents in the ceiling designs in these focal areas. Brushed stainless steel small basketweave mosaic tiles from Daltile were used as wall accents in the break areas. Carrying the brushed metal theme throughout the space helped to tie the entire design together and it really functions like another color in the scheme.

As DesignPoint continued with materials selection, it moved on to the largest area to cover, and that was the open office area carpet, looking for neutral colors that were not flat and boring, so texture was very important. The perfect combination was discovered in Bentley Prince Street’s Vivid Ombre in its Madras colorway. The preference for this open plan layout was for carpet tile, and a large 36”x36” tile size was used to cover the nearly two acres of floor space. A quarter-turn installation was specified for additional interest to the pattern and neutral color. The goal was to set off the private offices, being mindful of the fact that, with the interior glass wall system, the carpets would not only touch each other at the door jamb but the eye would flow right in as one looked across the space. So the coordinating broadloom pattern of Really Late Night TV, in its Flat Screen colorway, was used. This provided a subtle transition, in that the pattern design changed but the overall color did not. A third coordinate, Distinctive Ikat, also in the Madras colorway, had a plush texture, and was installed in the boardroom to further set that apart for a richer, upscale appearance.

While carpet was a must in office areas for sound absorption, especially with the new open plan and collaborative concept, the design team didn’t want a completely monotonous sea of carpet. It was important to help define some of the ancillary spaces by using alternative floor materials. For the break areas and gathering spaces the team selected luxury vinyl planks and tiles from Centiva. A basketweave installation added interest to the kitchenette areas, while a more intricate two-tone block pattern was used in the executive pantry to set it apart and add a pop of visual interest for those walking by. While the team began using luxury vinyl products mainly on senior living projects, the new product sizes and visuals coming out in this material definitely lend themselves to use in corporate spaces as well. These new formats have given designers much opportunity to get creative with layouts. This trend is also now showing itself in carpet tiles as well. Floor designs are seldom laid out in traditional monolithic patterns as they have been in the past, and many manufacturers have idea books or installation photos on their websites, which are great for design inspiration.

Some of the spaces required special flooring considerations because of their specific use. For the data and IT rooms, Roppe ESD Static Control vinyl tile was installed to help protect the equipment from static electricity. In the gym, Mannington Commercial’s Premium Rubber Sports Flooring was used to create the appropriate floor for a workout environment. In both of these areas the flooring plays a large role in how well these spaces perform for their intended use.

Because the public restrooms on both floors were already finished out prior to move-in, a matching floor tile pattern was used in the new locker rooms adjacent to the gym. The product, Crossville’s Buenos Aires Mood porcelain tile, was installed on the floor and then carried onto the walls and into the shower enclosures. Originally the 12”x12” floor tile was specified to run into the shower stalls but because of issues with the slope required at the floor drain, it was changed to a 2”x2” mosaic in a matching color. At the vanity, a small detail of mosaic glass tile, Daltile’s Maracas Glass, was used to again mimic the public restroom design, but the color was changed to coordinate with the new floor tile selection.

The end result is an upscale office environment, which pleased both the project team and, most importantly, the end user. The transition to the open environment was well received by the employees. Concerns about noise levels in the open office were non-existent. People came out of their individual spaces and gathered to work together. In fact, some of these collaboration areas have become the most coveted work areas in the office. It is a corporate headquarters that everyone can be proud of, and it reflects Avantor’s new corporate culture and sets the standard for its path moving forward in the global marketplace.