Deep Cleaning: Amid the coronavirus outbreak, contract flooring companies step in to sanitize and disinfect workplaces - May 2020 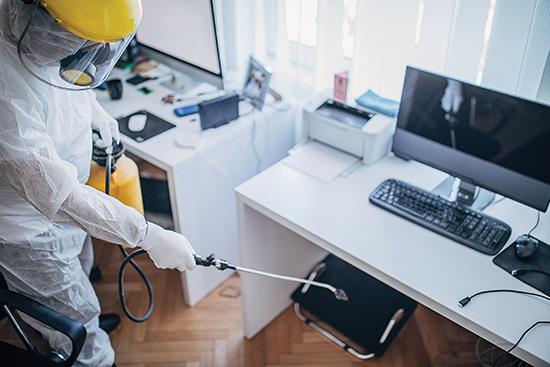 Afine mist shoots into the air amid the whirring and humming of a machine in the background. Men donning white paper suits, face masks and heavy-duty gloves work in pairs, moving across the room and aiming the spray at every nook and cranny. It’s like a scene from a movie, one where an alien virus has invaded the planet, and the government is forced to quarantine an entire town. But it’s not. It’s just a corporate office somewhere in America, and it’s a routine that has become a familiar one for maintenance contractors who are working to help stop the spread of infectious disease.

By the end of March, states and municipalities across the country issued shelter-in-place orders, telling residents to enact social distancing and forcing educational institutions and “nonessential” businesses to temporarily close. The goal: to flatten the curve on coronavirus and halt its deadly march around the globe.

But not all businesses closed, and some workers were still reporting to their offices. Companies that remained opened began taking extra safety precautions, including new disinfection measures. Even the ones that shuttered seized the opportunity to do a deep cleaning.

For some in the commercial contract flooring business, it’s been an unexpected boon. From New York to California, business owners have reported exponential increases in requests from corporations, schools and medical facilities to sanitize the workplace. And they say this is probably part of the new norm.

BUSINESS IS GOOD
On a recent day on Wall Street, sanitation crews worked the floor of the New York Stock Exchange, doing a deep clean in an effort to keep brokers healthy and on the job, according to The New York Times. Crews like the one used there, which in most states are deemed essential, are seeing an increase in calls, and demand for their cleaning and disinfection services has reached record levels.

DFS Flooring, a full-service flooring contractor with six locations and 200 employees in Southern California, specializes in the supply, installation and maintenance of all flooring types in the commercial sector. Sanitization has been a very small portion of its maintenance business at around 1% or 2%, according to John Hodgson, vice president of maintenance. But in recent weeks, the Van Nuys, California-based company has reported a substantial increase in calls. Now, it’s “probably 50% of our maintenance business,” Hodgson says.

More than 1,500 miles away in Houston, Texas, the story is much the same for Texan Floor Service, where maintenance manager Jesse Castro has overseen services like upholstery and carpet cleaning and concrete polishing within the commercial market for 20 years. Just ten years ago, the company added sanitization to the menu. Since the coronavirus outbreak began, Castro, who is chairman of the maintenance board for Fuse Alliance, says business has been steady. “Let’s just say, I ran out of products and didn’t have any for a couple of weeks. I just had 160 gallons come in ... now I’m down to 55 gallons in less than a week.”

One recent project that Texan Floor Service took on was for a construction company that has six active sites. “We went in and sanitized all their construction trailers, their interiors where they are doing the construction, and they had us sanitize their port-o-potties, scissor lifts, fork lifts,” Castro says. “Anything that anyone was touching.”

Eric Boender, director of floor care with Starnet, says it’s a theme he has seen in recent weeks among his organization’s 65 commercially focused member companies. Sanitization and disinfection have been around for a while and have been a consistent segment of business since probably 2009, he says. But prior to COVID-19, most calls were for businesses seeking services in daycares and schools, especially for locker room odor control. He says calls have increased tenfold in just a month, mostly from corporate facilities seeking to sanitize workspaces.

For 30 years, New York state-based RD Weis has served the Northeast, becoming a full-service flooring contractor in the mid-1990s. Along the way, the company picked up niche specialities, including disinfection. Founder Randy Weis says the recent uptick in calls he has seen can be attributed to two categories of customers: those who are reactive, and those who are proactive. “When the reactive ones call, it’s ‘How soon can you get here?’” He said those calls have tapered off and the volume is now coming from those working to get ahead of any potential problems.

HOW IT WORKS
There are a few applications that can be used to disinfect a building. One common process utilizes an electrostatic sprayer in which particles become charged, allowing the chemical to adhere to surfaces like the underside of a desk. Boender explains that the sprayer disperses a fine mist and doesn’t get things wet. Another method is fogging, which is a gravity approach. According to Weis, “You point the fogger toward something, spray a mist on it, and what doesn’t hit that object settles to the work surface or the desktop or the chair.”

Two of the most popular chemical products are Vital Oxide and ProKure, which are distributed by XL North and Jon-Don, respectively. Vital Oxide was created by Vital Solutions, a family-owned company that started about 20 years ago, according to the founder’s son, James Parker Burnett. Composed of chlorine dioxide, Vital Oxide has been used in the cruise ship industry, where infectious diseases like norovirus are notorious given the tight quarters, numerous public spaces and thousands of travelers on board. ProKure is also a chlorine dioxide-based product and was developed by Phoenix, Arizona-based company ProKure Solutions. Chlorine dioxide is touted as being safer than other harsher disinfectants like bleach. In recent weeks, many commercial flooring contractors have posted statements on their homepages advertising services around both products aimed at combating coronavirus.

But do these chemicals really kill coronavirus? Since new pathogenic viruses happen infrequently and the viruses are likely to behave in unpredictable ways, the Environmental Protection Agency and those within the scientific community use what is known as an “Emerging Pathogen Claim.” This process allows companies to make claims on the use of previously EPA-registered disinfectant products to fight new pathogens not listed on their labels, provided the disinfectant material has met certain criteria. The off-label claim process can only be used during new disease outbreaks in which environmental surface disinfection is recommended by authorities to prevent transmission. The process has been activated since the outbreak of coronavirus, allowing previously registered products to make these claims against COVID-19. Part of the reason for this is that it’s impossible for companies to test their products against COVD-19 directly, and the virus’ spread has been astronomical. As a novel virus, it’s not available to the general public for product testing. But, under EPA guidelines, if your product has been tested against other similar hard-to-kill viruses, the agency will grant approval to allow the company to claim their product as a COVID-fighting agent.

Recently, Sweden-based Bona came out with its PowerPlus Anti-bacterial Hard-Surface floor cleaner, a hydrogen peroxide-based formula, which according to the firm, is a safer formulation than most chemical cleaners. When the EPA released a list of cleaners that can be used to combat COVID-19, Bona’s new product was on that list, making the following claim: “Bona PowerPlus Antibacterial Hard-Surface Floor Cleaner has demonstrated effectiveness against viruses similar to SARS-CoV-2 on hard, non-porous surfaces. Therefore, this product can be used against SARS-CoV-2 when used in accordance with the directions for use against Rhinovirus on hard, non-porous surfaces. Refer to the CDC website at https://www.cdc.gov/coronavirus/2019-ncov/ for additional information.”

Burnett says it will always be a battle to keep up with emerging viruses, “Because we will always be playing catch-up and we are never going to be ahead of how the pathogens mutate and change, it’s really using the best data that you have at the time to address the immediate problem.”

The chemicals themselves are safe, but to keep workers out in the field from contracting COVID-19, many are wearing full protective gear, and some companies are limiting the number of people in one work area at a time. “When we come in [to an office space], we want everybody to be gone,” Hodgson says. “Some arrange for a time when no one else is working the building. Also, our crews are kept in teams of two, and the same two people go out together every day.” He said if a job requires more workers, they will separate the teams in different areas to limit possible exposure or spread.

OTHER CHALLENGES
The shelter-in-place orders have seen a crush of people at supermarkets and big box stores, snapping up any and every bit of supplies, forcing shortages of essential items like toilet paper and safety equipment like face masks and hand sanitizer. The flooring industry hasn’t been immune from this lack of supply.

Boender says there was a shortage of virus-fighting supplies early on, and “there wasn’t enough chemistry product we could get our hands on to keep up with the demand. But [those companies] have done a good job catching up.”

Hodgson said no one could have been fully prepared for what happened, “The demand for [chemicals] was tremendous. It just rocketed up. … But we have good suppliers, and we are a large company and buy in large volume, so we were able to procure 55-gallon drums of Vital Oxide, and we had enough to meet the demand.”

Burnett said Vital Solutions has been working nonstop to keep up with the heavy demand, “Fifty-five-gallon drums that typically aren’t our [biggest sellers] are flying off the shelves, and we are doing our best to keep up with that.”

The equipment used to disperse the sanitizer, like sprayers made by Victory and Hurricane, have also been in short supply. “From what we understand, the airlines are buying these in large quantities,” Boender says, adding that’s probably a good thing; at least the planes are being cleaned.

Amid the shortage in sprayers, Castro says the company has had to use a different kind of sprayer, which is not electrostatic. It just takes a little longer to cover more space. He says he has spoken with manufacturers who told him there is currently a months-long backlog for the electrostatic sprayers.

Boender also cautions that there’s a right way and a wrong way to sanitize, pointing to a rise in janitorial services stepping into the ring and offering services that industry experts say don’t actually meet EPA standards for killing COVID-19. Hodgson agrees, adding, “We advise our clients that our method is EPA-certified, and we can direct them to the EPA website where they can see the product listed there.” Weis says customers should be cautious about new people that have come into the market in the last 60 to 90 days.

THE NEW NORM
While the demand for these disinfection services has been an expected blessing for contract flooring companies who specialize in maintenance, it’s not likely to remain at the same levels once the outbreak is contained. But the consensus is that the health and well-being of America’s workers will have a renewed focus, and these types of services will likely become part of the “new norm,” whatever that looks like. Many feel that this has been an eye-opener for many companies.

After the threat of the virus ends, many in the industry expect lasting effects. “I could see people get into consistent contracts seeking infection control,” Boender says. Hodgson also sees sanitation becoming “an essential part of the type of work that we do, which is cleaning and keeping things healthy. It’s going to be much more of a focus than before. Everybody is much, much more aware. And I think even after this pandemic is over … and in years to come when it’s just treated like another version of the flu, I think people will be taking more care to make sure their premises are clean and healthy.”