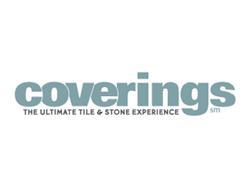 The show, set for April 29-May 2 in Las Vegas, will also host a party to mark the event on April 30 at the Hyde Bellagio.

The largest tile show in North America features seminars, keynote speakers and many other activities for anyone interested in tile.

Seminars are organized into customized tracks for each segment of attendees—distributors, retailers, architects, designers, fabricators, contractors, builders and professionals but are open to all attendees, based on their individual areas of interest.

Astrachan, executive director of the Tile Council of North America, will discuss “Hot Issues in Tile Standards and Design” on Tuesday, April 29 at 12:30 p.m. He will be joined by Luciano Galassini, Deputy Director General, of Ceramics of Italy, for additional information on thin tiles from an Italian perspective.

Interior architect Rottet will present some of the nation’s most highly awarded hotels and offices on Wednesday, April 30 at 12 p.m. in a seminar titled “Rottet Style with Stone and Tile.”

Yellen, CEO of disaster recovery firm Belfor, will present “Breaking Through Barriers by Putting People First” on Tuesday, April 29 at 9 a.m. He will discuss how he took a $5 million company to a $1.5 billion global leader by putting people first.