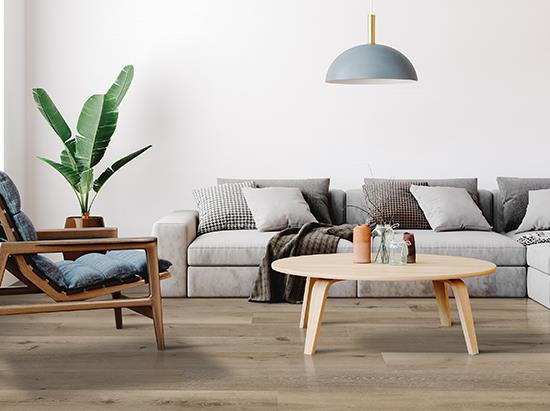 Home equity and remodeling activity have hit historic highs over the past few years, leading to a lot of flooring being sold. But what does that spending look like-are people really splurging, and what do homeowners flush with cash and equity gravitate to in terms of flooring materials and style?

PRICE POINT
Penny Carnino, director of operations for Grigsby’s Carpet, Tile and Hardwood, reports that the Tulsa, Oklahoma store’s sales are up 17% this year, “which for us is a big number, especially since it’s up against last year, and we were up.” Capitol Carpet and Tile general manager Rodney DiFranco says he’s “mind boggled” at how much people are spending at the four-store flooring chain in south Florida but points out that “you’ve got people willing to spend $110,000 on a pickup truck.”

Amid record inflation, top-line numbers can be deceiving. Flooring manufacturers have issued multiple price increases in the past year, which ultimately trickle down to consumers. But our sources say that’s not the only reason why customers are paying more. “We are seeing the home price ‘wealth effect’ that makes homeowners invest more into their homes,” says Patrick Molyneaux, owner of Molyneaux Home, which operates eight full-service floor stores in the Pittsburgh, Pennsylvania area. “We are finding that homeowners want more design assistance and are buying higher-end goods. If our in-home design consultants are selling style, customers are paying more per square foot.”

The pandemic forced people to see their home with fresh eyes. Many finally tackled outdated finishes and layouts, turning their home into the sanctuary of their dreams while allowing for greater functionality as home base became ground zero for activities including fitness, education and work. “People are making their homes much more of a castle than they ever did before,” DiFranco says. “Because of the amount of time people are spending at home, they really want to make it what they want it to be. Since Covid, the amount people are willing to put into their floor has increased dramatically-not a little. It’s a pretty significant difference.”

Rising home values have also made buying a new home unattractive, meaning homeowners can expect to spend more time in their houses in both the short and long term. “Especially in south Florida, where the price of homes has exploded, people don’t feel confident if they sell their house that they can find something else,” explains Capitol Carpet and Tile owner Louis Morano. “They’re buying better-end products since they’re in their homes a lot more.” While he notes that some customers are price-conscious, “many are coming in and saying they want to get what they want.” In terms of the “good, better, best” hierarchy, Molyneaux says he, too, is “seeing a lot of play in the ‘best’ category.”

DiFranco points out that installation costs, which make up a significant portion of the total price, are fixed, making higher-end goods more of a value equation than one might think. But in cases where heart strings are not involved, purse strings may still win out. “If people want something specific, and it’s color-driven, I think they’ll pay the price for what they want,” Carnino says. “For people who are not really sure what they want…as long as they find something they like, they’re going to go for the better-value product.”

MATERIAL
LVT is still on the rise, but the pandemic gave soft surface an edge as people sought comfort from the gloom and uncertainty of the world outside and sound mitigation amid their floor’s growing list of duties. “Carpet still gives you that comfort feeling, where hard surface really doesn’t,” says Carnino. “People are still buying a lot of luxury vinyl plank, don’t get me wrong, but people who remodeled in bedrooms and those types of areas chose carpet.”

Morano says his clientele typically opts for hard surface throughout the house to counter the moisture and sand inherent with Florida’s climate, but he’s seen larger carpet orders as of late. “Even though we sell a tremendous amount of hard surface, we’re selling more carpet, and not just in bedrooms,” he says. “It’s definitely not the norm, but we’re seeing more of it the last couple of years.” He’s had recent clients spend $25,000 on carpet that extends throughout the house: “one design, one pattern and one color throughout.”

Carpet’s enhanced style and characteristics have helped it maintain a foothold as a material of choice, though it should be noted that none of our sources report a drastic soft surface rebound, and LVT is set to displace carpet as the industry’s leading flooring material. “LVT is by far our most popular material,” Molyneaux says, noting that his LVT sales continued to outpace other materials’ during the pandemic. However, he adds, “Higher-end carpet, especially cut/uncut, seems hot.”

As pet ownership becomes the norm for American households-70% of which now have pets, according to the 2021 to 2022 National Pet Owners Survey-recent strides in moisture and stain protection are making carpet a viable option for those homeowners, who may have felt LVT was the only way to go due to its well-touted waterproof characteristics. But aesthetics are generally consumers’ first consideration, so unless a customer comes in looking for carpet, those pet properties will probably not be enough to sway someone from a wood-look floor if that’s what they’re going for.

With recent enhancements in water resistance, laminate, on the other hand, stands poised to gain some share from LVT. “Once you get those products to the same basic warranty as vinyl plank, that’s where you’re going to see a big shift in that market,” DiFranco says, noting laminate’s superior scratch resistance. “Has it hit yet? I don’t believe so. Do I think we’re going to see it this year? Absolutely.” He adds, referencing Mohawk’s remarketed laminate products, “We’ve seen a lot of RevWood come into this place over the last six months, way more than I’ve ever seen before.”

THE VALUE OF U.S. PRODUCTS
The pandemic may have heightened consumers’ awareness of country of origin, but it still does not seem they are willing to pay more for American-made products based on principle. The retailers with whom we spoke say a “Made in the USA” designation may help sway consumers from a similar product, but it is not a main determinant in their selection, and it does not outweigh significant price differences. However, the value proposition of domestic sourcing has changed in light of supply chain challenges that have made international products’ availability much more volatile, so while customers may not be willing to pay more for the domestic designation, products with availability can demand more of a premium.

STYLE
Grey’s protracted time at the top is not quite over, but it is shifting in favor of “greige” as more-neutral beiges and taupes make their return. “Neutrals always win,” says DiFranco. “In the last 36 years, I’ve seen grey come and go three times. I think we’re on the downturn of that cooler shade right now.” Molyneaux agrees that “warm colors are coming back; there is movement away from greys.”

Carnino narrows the popular colorways in her area down to specific products: Cali’s Builder’s Choice in Aged Hickory, followed by Armstrong’s Tuckahoe Hickory in South Creek Brown for those seeking something darker. But she adds that rustic aesthetics have given way to cleaner looks, regardless of whether the color has more dimension. “People have watched HGTV, DIY, they’ve seen Pinterest, and they all have that clean, bright look, so they’re like, ‘I want that, too,’” she says. In keeping with that, Carnino says she has seen growing interest in LVT with popular marble looks, primarily Carrara.

On the soft surface side, patterns are in demand, but with so many different shopper personalities and potential patterns from which to choose, it’s more difficult to pinpoint the reigning style. “If you’re putting carpet down, you’re using it as a statement,” Morano says. However, Carnino notes that the “clean” look has transferred over to the preferred carpet construction. “Everything has gone more to texture, but not loose texture,” she explains. “Most everybody is going to those cleaner looks and using LCL patterns.”

MATERIAL CONCERNS
The shift to higher-end goods isn’t just an aesthetic consideration. Consumers are becoming more educated about LVT especially, and coming in looking for more durable product, Carnino reports. “The wearlayer changed mostly to 20 mil over the last year,” she says. “We’re not even really stocking anything that’s less than that.”